In an acceptance speech given in the White House rose garden, at what would later be recognised as a coronavirus super-spreader event, the Supreme Court nominee Amy Coney Barrett spoke about her home life. “While I am a judge, I’m better known at home as a room parent, car pool driver and birthday party planner,” the 48-year-old federal court judge, ultra-conservative Catholic and mother of seven said. Her professional success, she signalled, had not come at the expense of her commitment to traditional domestic values and ideals of American motherhood.

Barrett paid brief tribute to Ruth Bader Ginsburg, the feminist hero whose seat she has been picked to fill, but she sees herself as continuing a different legacy. She said that her former mentor, the late archconservative Supreme Court Justice Antonin Scalia, had an “incalculable influence” on her life and her judicial philosophy. “A judge must apply the law as written. Judges are not policymakers and they must be resolute in setting aside any policy views they might hold,” she said, a claim to neutrality that in reality upholds a rigid and narrow interpretation of the US constitution that has historically been used to hold back civil rights advances, restrict access to healthcare and limit the size of the state.

Barrett has written previously that abortion is “always immoral” and she has consistently voted in favour of increased restrictions. There are 17 abortion cases one step away from reaching the Supreme Court; should Barrett be appointed to the court she may support litigation that could overturn the constitutional right. She would also in November hear the latest attempt to abolish the Affordable Care Act, which extended health insurance to millions of Americans and which she has criticised in the past. The New York Times commentator Ross Douthat has described Barrett as embodying a “conservative feminism that’s distinctive, coherent and influential” but she might soon be better thought of as America’s most powerful antifeminist. 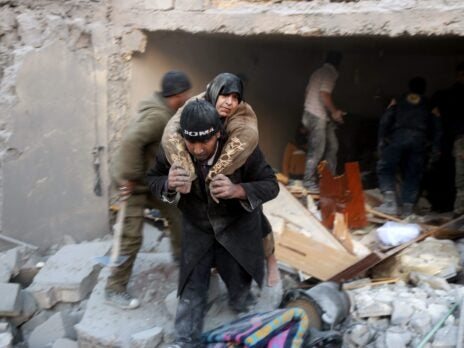 What my friends trapped in Aleppo want you to know

The eldest of seven children Barrett grew up in New Orleans, where her father worked as a lawyer and her mother was a French teacher. She studied English at Rhodes College, a liberal arts school in Memphis, and considered becoming an English professor but decided to apply for law school because, she said in a 2019 talk, as a lawyer she could be involved in “shaping society in a more direct way”. She graduated first in her class at Notre Dame law school, a Catholic university in Indiana.

It was at Notre Dame that the young Barrett caught the attention of law professors affiliated with the Federalist Society, a conservative legal network founded in 1982 by the Yale law professor Robert Bork and Justice Scalia to foster and advance conservative legal talent. In recent years, the organisation has become a “conservative pipeline to the Supreme Court,” the lawyer Jeffrey Toobin wrote in the New Yorker. Trump’s other appointees, Neil Gorsuch and Brett Kavanaugh, are affiliated with the Federalist Society, as are the George W. Bush appointees John Roberts and Samuel Alito. Barrett “has been groomed for this moment all along,” one of her former Notre Dame colleagues told Politico in response to her Supreme Court nomination. Politically astute professors gleaned that this “sharp, attractive and devout” woman would be an asset for a movement mostly associated with “stodgy men”, the political news website observed.

On graduation, Barrett clerked for Judge Laurence Silberman and then for Scalia. After a stint in private practice, she returned to academia. Since 2002 she has taught at Notre Dame, where her students named her “distinguished professor of the year” three times. She was a member of the Notre Dame Faculty for Life, a university network that “respects the value of human life from conception to death”.

She and her husband, Jesse Barrett, a lawyer, are also members of People of Praise, a charismatic Catholic group that has been described by some former followers as a “cult”. Its members pledge lifelong loyalty to one another and must obey their assigned personal advisers, known as “heads” or “handmaidens”. In 2017, when Trump nominated Barrett to the federal appeals court, the California Democratic senator Dianne Feinstein questioned Barrett on whether her religious views on abortion, gay marriage or the death penalty would influence her rulings. “The dogma lives loudly within you,” Feinstein said, “And that’s of concern”. Barrett responded that she believed it is “never appropriate for a judge to impose [their] personal convictions”. Conservatives were outraged, suggesting that Barrett was discriminated against because of her faith. Entrepreneurial right-wingers printed “the dogma lives loudly within you” t-shirts and mugs.

John Adams, a lawyer who clerked for Barrett from 2017 to 2018, described her to me as a “brilliant, courageous and fair judge” with “an unrivalled sense of humanity, humility and humour”. Barrett would often joke that she was the only federal judge in America driving a minivan to work, and describes herself as a “textualist” and an “originalist” who interprets the constitution based on its original meaning. These words “operate as an agenda to crush labour unions, curtail environmental regulation, constrain the voting rights of minorities, limit government support for healthcare and free the wealthy to buy political influence,” Toobin wrote in the New Yorker. Adams responded to the critique by describing Toobin as “an ideologue who has never served as a judge” and saying that originalist judges are only interested in “strictly interpreting the law and applying the law neutrally”.

Barrett will no doubt advance a similar argument in her Senate confirmation hearing scheduled for 12 October (Adams is helping her prepare, he said). If she wins enough votes, she’ll become the youngest woman appointed to the Supreme Court. Her decisions will shape Americans’ lives for decades to come. For many women, this is a terrifying prospect.