Aloys Vimard, project coordinator for Médecins Sans Frontières/Doctors Without Borders (MSF), has been on board the Aquarius rescue boat for three months. It is his 7th mission with MSF, having worked in different emergency contexts including an Ebola outbreak in Guinea, a surgical trauma hospital in Yemen, and after the earthquake in Nepal.

We are currently sailing towards Valencia with 51 women, 10 children and 45 men on board our rescue vessel, Aquarius. Sailing alongside us are the Italian coastguard and an Italian naval boat. Between them, they are carrying the remaining 523 people rescued from international waters last weekend.

The atmosphere is calm, but people are exhausted and unwell after six days at sea in rough waters. Yesterday the weather was very bad with four-foot waves at night leaving many seasick. We’ve installed ropes across the deck to help people move around the boat and get to the toilets without falling over, but it’s far from comfortable.

The conditions on board are not ideal; people are exposed to the elements and many are sleeping on the floor. Our usual set-up is not meant for such a long stay at sea. It is heart-breaking to see these already fragile people, including a breast-feeding mother, unnecessarily endure further suffering.

And why are we in this situation?

A political game has been played with Aquarius. We have been forced to remain at sea instead of being allowed to disembark in Italy, the nearest safe port. For two days, hundreds of tired and weary men, women and children, many of whom have survived unimaginable horrors inside Libya, were trapped in a stand-off between Malta and Italy. Each country refusing to take responsibly for their care.

This becomes more confusing when we consider that 400 people on board were rescued by Italy’s own coastguard before being transferred onto our vessel. A further 229 were rescued in two operations coordinated by the Italian authorities.

We could have safely disembarked everyone on Monday and been back in the search and rescue zone by Tuesday night. International Maritime Law says that, following a rescue in international waters, people should be disembarked in the nearest port of safety. At the point where we were stopped by Italian and Maltese authorities, we were 27 nautical miles from Malta and 35 nautical miles from Sicily, Italy. Yet instead of being given a port, we were left floating in the ocean for almost 48 hours before being told to sail to Valencia in Spain.

Now, we are spending four more days travelling towards Spain, where we are due to arrive sometime between Saturday night and Sunday morning. This has left a deadly gap in search and rescue capacity in the Mediterranean. Our need to be there was made acutely real last weekend when 40 of those we rescued had to be pulled from the water after their boat broke apart. Some even had to be resuscitated. We have since learned from talking to those who survived that two of their loved ones are missing, presumed drowned. 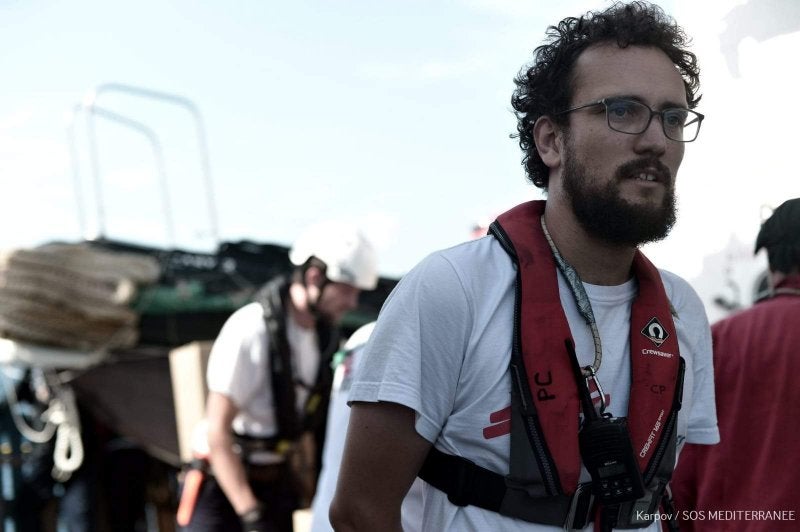 As one young man we rescued explained, “When we fell into the sea, it was cold and dark. People were tearing at me, my clothes, anything they could get their hands on to stay alive. I fought very hard to get to the lifejackets you were throwing to us. I managed to get one and shouted for help! I was rescued and then given medical treatment. You saved my life.”

We are humanitarian workers, here to save lives. But this week our mission has been undermined and manipulated by Italian and European governments, who are buckling under the pressure of their own broken and outdated asylum systems. They have used people’s lives as currency, as bargaining chips.

And as leaders drew their battle lines on the issue of migration, those on board the Aquarius feared they would be forced back to Libya. We even found two men hiding in garbage containers on Tuesday while transfers to the Italian vessels were taking place, scared that this indicated a return to the country they had just risked their lives to escape.

In the words of one of our patients, “Libya is no place for any living person. They take everything from you including your spirit and crush it. It’s a violent place where many people are raped and murdered.

While all of this has played out in the political arena, a further 900 people have been rescued in the Mediterranean over the last few days by Italian coastguard vessels. Curiously, they have been permitted to dock in Italy with no delay.

Yet, as we sail to Valencia, thousands of miles from where we are needed, caught up in Europe’s dirty political games, the bodies of 12 people who had no-one there to rescue them earlier this week remain in the graveyard of the Mediterranean Sea. The US Navy ship that found them did not have a morgue on board.