I frequently fall down internet rabbit holes – I google medical symptoms late at night, I look up animals who have won awards (I have not won awards), I try to find out the exact length of intestinal worms pulled from dogs’ bellies on old episodes of Ripley’s Believe It Or Not that I vaguely remember watching in the ‘90s (results so far inconclusive). I also habitually read the one-star Amazon reviews of books I love. Why? I have no idea. Try it. It’s like sitting mutely at a dinner party with aliens.

“The book arrived on time in and was in great condition but the actual literature itself was just terrible . . . its turgud, pretentious crap, which is badly written and really just utterly dull, I doubt a combination of the literary talents of Katie “Jordan” Price and Alan Shearer could come up with something more indescribably poor.”

Go find a book you love. Click the one-star reviews – there will always be some. Cancel your plans for this evening.

Dispatch: Putin’s answer to the Ukrainian crisis might lie in Georgia

But one-star Amazon reviews are more than a space for performance art or green-ink rantings. Some authors believe that they amount to “bullying”. Anne Rice, writer of Interview with The Vampire has signed a petition snappily entitled Protect Amazon.com Users and Indie Publishing Authors from Bullying and Harassment by Removing Anonymity and Requiring Identity Verification for Reviewing and Forum Participation – a collective effort to eradicate trolling and abuse in one particular corner of the internet. The petition wasn’t her idea, nor was it one of the dozens of daily causes sent to our inboxes courtesy of 38 “pick your battles” Degrees as a way of enabling Rice’s long and personal war against The Unfavourable Reviewer. (ICYMI: Last year she took umbrage with a small potatoes blogger (who not only didn’t like her book but cut it up for some arts crafts project), posted a link to the offending review on her Facebook and invited comments. Essentially she just set her fanbase on someone who didn’t like her book, and opened the blogger up to a world of shit-slinging from the more slavish of the group (others called Rice out on it).  In terms of picking a postergirl against being a dick on the internet, you could do better than Rice.)

Anne Rice is not the only writer to have gone after a bad reviewer. In 2011, a self-published author in Milton Keynes launched libel proceedings against the guy who wrote a series of bad Amazon reviews of his book, The Attempted Murder of God: Hidden Science You Really Need to Know. Also summoned to the courtroom were Richard Dawkins and his foundation (for discussion threads relating to the review on the foundation’s website) and Amazon (for allowing this to happen in the first place). Earlier this year there was a story about another self-published author in America threatening to sue a reviewer because their single bad review allegedly lost the writer $23,000. Whether it’s back-of-the-envelope maths or real maths we’ve only got his word, but at this point it’s irrelevant. Stay with me.

While I’m up late googling intestinal worms I shouldn’t be, there’s a thing I always try not to do and invariably end up doing anyway on Twitter: argue. As a rule, it’s best not to engage. If you engage, you will not come out looking good. I have argued in favour of outlawing shorts. I once swore, in a sleepless blaze, that taramasalata is better than hummus (I GOT MY WORDS AROUND THE WRONG WAY). We all make mistakes. Nobody comes out looking good and screenshots last forever. This rule is also applicable to Amazon.

The author-who-thought-the-one-star-review-put-him-down-$23,000 broke this rule. He engaged. He commented on the bad Amazon review, the reviewer wrote back and by the end of it there was a 19-comment thread right there on the Amazon page where anyone thinking about maybe possibly buying the book would see it. I’m speaking for myself here obviously, but I’d consider that kind of a turn-off.

Had he left it alone that one-star review would have been an outlier compared to dozens of better ones (35 of them being five-stars) and probably regarded as the anomaly it was. But – like Jerry Seinfeld evening up his chest hair in that werewolf episode – he went too far. Could it be as simple as that thing where you don’t remember compliments, but you do remember the place, the time, and the tone in which you’re pretty sure someone implied you have a fat arse? Internet nemeses are easily gained and rarely forgotten. I should know – I have them as saved searches in my Tweetbot.

But of course there is a big difference between bad Amazon reviews and disagreeing on Twitter: here there is money involved. Bad reviews pull the book’s overall rating down – the rating that sits right under the name of the book in yellow stars. The temptation to “game” that kind of system is often irresistible – to fans, to haters, to the authors themselves.

Reputable sites make a point of not tampering with customer reviews, or at least being transparent about what’s fair comment and what’s not. Richard Longhurst, co-owner of Lovehoney, Britain’s biggest online retailer of sex toys, says that while his staff do go in and correct grammatical errors, Lovehoney will never outright remove a bad customer review from their website – the presence of the bad lends validity to the good.

What prompted Rice to sign the petition were her experiences in an Amazon forum this past January (although she’s been talking about the Amazon problem for some time). She was answering questions while “predatory career bullies” (screengrabbed here) spat venom and abuse, anonymously. She told the Guardian: “They’ve worked their way into the Amazon system as parasites, posting largely under pseudonyms, lecturing, bullying, seeking to discipline authors whom they see as their special prey . . .  They’re all about power. They clearly organise, use multiple identities and brag about their ability to down vote an author’s works if the author doesn’t ‘behave’ as they dictate.”

Rice is right about one thing: there are reviewers out there who pride themselves on only leaving bad reviews. Meet Chris Roberts.

Roberts has 50 followers on Twitter, where he describes himself as a “short story writer, Pushcart Prize nominee and Lord High Executioner of the Amazon One-Star review”. I first started following him in June 2013. I found him underneath a listing for a book I was thinking about buying and he was rubbishing, in verse. It was a one-star review, the absolute hammer-to-the-balls of the Amazon world. This month he reached a landmark 350 one-star reviews. Authors range from the relatively unknown, to Paul Auster, to Vladimir “nowhere near as good as Katie Price” Nabokov. Since he started in 2010, Roberts has read and loathed more books than I have stacked guiltily and unread by my bed. By review number five he was signing off as “Chris Roberts, God”.

He has reviewed a collected edition of Nora Ephron’s work by writing a one-act play in the style of Tennessee Williams. Signing himself “Chris Roberts, lord God of the spooky edge”, he reviewed a Thomas Pynchon book in free verse averring that “YOURS is a cyclical pantomime”. He reviewed a book about Bob Dylan by noting, “Insanity is knowing Bob Dylan can’t hold a note…/ And calling him a great artist…/ Insanity is his response to the Holocaust…”

I wanted to know why he rubbished, on average, two novels per week consistently for the past four years. I asked him but was evidently too slow in answering my emails (I am shit at emails, I will give him that). It went: less than brilliantly. You can still find these daily updates on his Twitter if you ever need reminding: 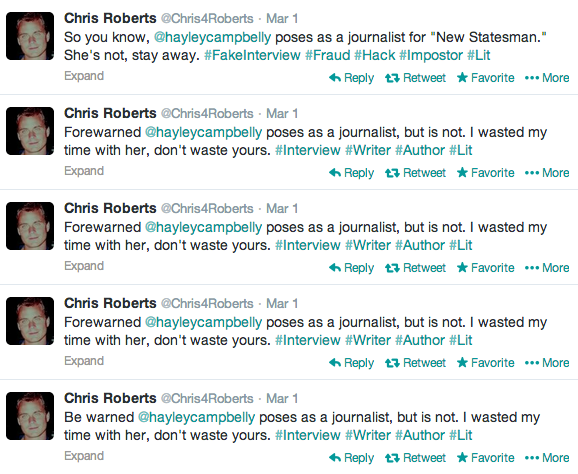 Matthew Taub at OTBKB had better luck than me in interviewing Roberts: here he ponders whether he is an “obstinate troll or literary muckraker”?

Roberts has a very clear view on one-star reviews: he likes giving them, and Amazon won’t stop him. He told Anne Rice as much: “even if Jesus Christ signed the petition, Amazon will do nothing”.

While an Amazon rating might matter little to you, it matters a lot to the author. Nobody checks an Amazon rating more frequently than the book’s author. It’s the sort of thing that keeps a person up at night. I should know, I have slept in the houses of the Amazon-ranked.

Here’s what writers do in their dressing gowns: writers write back to people who slate them. We know this because in 2004, for one stomach-flipping week, the anonymous reviewer names on Amazon Canada were replaced with real names. By the time the glitch was rectified we’d already found out that the anonymously named “a reader from New York” was actually Dave Eggers, rebutting bad reviews. Some writers wrote five-star reviews of their own books (and their friends’ books) in order to boost the rankings. Don’t judge those guys, you’d do it too. When ratings equal sales, it’s a means to survival. It’s the online equivalent of going into a bookstore and rearranging the display so that your own book is front and centre (also left, right, above and below if my time as a bookseller taught me anything), or putting in a fake order and then cancelling it so the store is forced to put it on their shelves (where it can be rearranged in a week’s time to front, centre, left, right, etc). In areas of creative work, games are always being played: for good and bad.

Remember that self-published author from Milton Keynes? The judge threw the case out, a) because such a small portion of the reviews would actually be considered libellous and pursuing it would be a waste of time and money, and b) the judge thought the author might have trouble convincing the jury that he had been wronged, considering his own online behaviour. He has been pseudonymously rebutting bad reviews and adding favourable ones. (He owes £100,000 in legal bills.)

Essentially this Amazon petition is just a part of the wider discussion about people being dicks on the Internet. Even if you take away their anonymity, people will still find a way to be dicks on the internet because it’s the internet. As for Amazon reviews, they have become bottom half of the internet at worst, strategic puff pieces at best, and therefore irrelevant unless you’re buying a washing machine or being funny about Penetrating Wagner’s Ring. In the same conversation you have with your mum about that man from Nigeria asking her for money, you need to explain how Amazon reviews need to be ignored.

Will the petition work? I doubt it. If Amazon’s customer reviews were a stain on your shirt, they’d be a go-home stain. No amount of scrubbing will get this out.