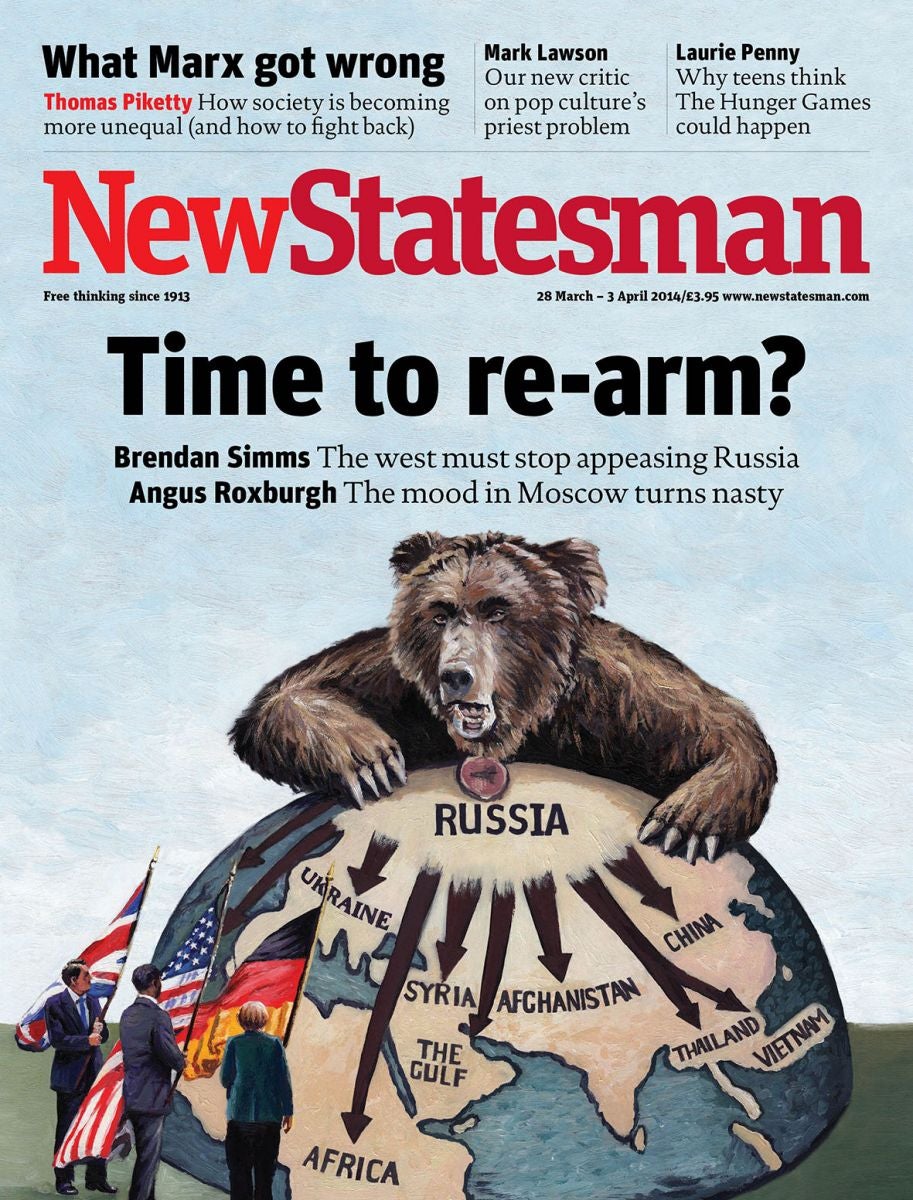 Brendan Simms: Why The West Must Stop
Appeasing Putin’S Russia

John Gray on the moral world of Captain America

Rafael Behr: Labour’s silences are too long and too loud

George Eaton on the rebellion from Labour’s left

The NS TV critic Rachel Cooke on Martin Amis’s England: “How can someone so clever end up sounding so incredibly stupid?”

In this week’s NS cover story, Brendan Simms, professor in the history of international relations at the University of Cambridge, warns that Europe should not underestimate the threat from Russia and that it must work towards unification and moral and military rearmament.

“When a man sticks in a bayonet and strikes mush, he keeps pushing,” Lenin once remarked approvingly, “but if he hits cold steel, he pulls back.” His successor Nikita Khruschchev was fond of repeating this remark as he tested the west in Berlin, Cuba and elsewhere during the cold war. For some years now, the Russian leader and former communist counterintelligence agent Vladimir Putin has also been sticking in the bayonet and, so far, he has encountered only mush . . . In the first phase of the Crimean crisis, western mushiness has been palpable.

Moscow could have been stopped by early action. If Russia had been deterred from attacking Georgia, or put under such intense political, economic and military pressure as to force it to withdraw, Putin would never have dared invade Ukraine . . . Failure to respond robustly in the early stages of this crisis, by contrast, has emboldened Putin and made the situation far more intractable than it needed to be.

Simms argues that the west should be under no illusions about the scale of the threat now posed by Putin’s Russia:

One way or the other, what we are witnessing is the biggest crisis of the European order since the cold war, with the potential to shred the reputations of the governments and national security establishments of Europe and the US.

Simms believes that the European project’s response to the Russian threat will determine whether it stands or falls:

The looming confrontation with Russia is best understood . . . not as a repeat of the past but as the beginning of something new: a European (cold) war of unification. Waging it successfully will consolidate the eurozone, just as the contest with France made Great Britain, and the American project in the world made the United States. Conversely, failing to take up the challenge, or doing so incompetently, may damage the European project beyond repair.

So what is it to be? Will the challenge from Putin’s Russia unite Europeans today, or will it drive them further apart, perhaps irreconcilably?

If that happens, history will judge the European Union an expensive youthful prank that the continent played in its dotage, marking the completion rather than the starting point of a great power project.

In a despatch from the Russian capital, the former BBC Moscow correspondent Angus Roxburgh evokes an atmosphere bristling with menace, in which increasingly pugnacious Muscovites have crossed the line between nationalism and chauvinism.

I found myself at a barbecue last summer . . . All the neighbours came round to meet the foreign guest. A thoroughly unpleasant experience it was, as they began by denouncing the pro-democracy protesters and the central Asians who clean Moscow’s streets, and ended by insisting that we British would never solve our problems until we throw out all our Muslims.

I recall hearing a very senior member of Putin’s circle (one of those whom foreign journalists describe as sophisticated and westernised) privately describing the Ukrainians as a nation of devious, untrustworthy crooks.

The atmosphere is about as nasty as I have ever known it in Moscow. There is, of course, another Russia, westernised and outward-looking, that watches all of this with apprehension. Many people have moved on too far to contemplate a return to the isolationist days of the communist period.

Yet the likely beneficiary of recent events will be – who else? – Vladimir Putin, his popularity bolstered by each new western sanction. Do we really want to ensure he is with us for another ten years?

Nick Pearce, the director of the Institute for Public Policy Research, considers the influence of the French economist Thomas Piketty, whose “magisterial” book Capital in the 21st Century is, Pearce argues, the most important work of political economy in decades, having rescued the study of inequality from oblivion.

Piketty’s thesis is arresting because he buttresses it with ample historical data to show that the reduction of inequality in the middle of the 20th century was an exception, not the norm in a market economy. Ordinarily, he argues, if capital is reinvested it yields between 4 and 5 per cent a year, outstripping economic growth. Wealth inequalities therefore increase.

[Piketty argues that] we need to rebuild the democratic institutions that can redistribute income and wealth. His signature policy is a global tax on wealth, levied progressively at different wealth bands. He is politically realistic enough to know that formidable practical and political obstacles lie in the path towards that objective. So he sets out various steps towards it, such as greater transparency about asset ownership, and automatic transmission of bank data to tax authorities, while urging the adoption of
a wealth tax at the European level. A tax at 0 per cent on fortunes below €1m, 1 per cent between €1m and €5m, and 2 per cent above €5m would affect about 2.5 per cent of the population of the European Union and raise about 2 per cent of Europe’s GDP.
This would of course require greater political and fiscal integration in Europe, which is why Piketty was a co-signatory, with Pierre Rosanvallon and other French intellectuals, to a recent open letter calling for tax-raising powers and a budget for the eurozone, held accountable to a new European chamber of national parliamentarians. Is this utopian? No more so than the “stateless currency” the eurozone already possesses, he says.

Is Piketty’s analysis too pessimistic? Thoughtful politicians will embrace much of [it]. Stewart Wood, Ed Miliband’s intellectual consigliere, has read the book and called for its arguments to be debated widely. Piketty’s work gives substantive grounding to the core argument of Miliband’s leadership that Britain’s post-Thatcherite economic model generates socially destructive, unjustified and ultimately unstable inequalities. But parties aspiring to elected office will also be deeply wary of the politics of levying supertaxes on the wealthy, and with good reason: François Hollande is currently the most unpopular president in French history.

In his column, the NS political editor, Rafael Behr, watches as frustration turns to fear in the Labour Party, with many MPs concerned that the party is ill-equipped to deal with the inevitable Tory onslaughts.

Miliband has made speeches on tricky topics, each crafted to neutralise some Tory accusation, without inviting charges of treason from his own side. He then seems to think the matter is settled. This hit-and-run technique has often frustrated Labour MPs. The mood is souring into fear of going into battle without defences against predictable Tory onslaughts. “There’s so little time to go and it doesn’t feel like we’re on a total war footing,” laments a backbencher. Others are harsher still. “We have nothing interesting to say about the things that really matter to people,” warns a shadow minister.

Labour will point at hardship and hunger as proof that the Chancellor’s economic recovery is leaving millions of people behind. To embarrass the government, the opposition will continue asking questions about food banks, zero-hours contracts, low wages, housing shortages, crippling rents and inequality to which Cameron has no answers. There are many awkward facts that the Tories want to wish away. All parties have their discomfort zones and things they would rather not talk about. Labour’s problem is that, when the Conservative attacks are constant, Miliband’s silences are too long and too loud.

George Eaton, the editor of The Staggers, the NS politics blog, predicts that increasing divisions in the Labour Party could lead to full-scale rebellion. Some Labour MPs have declared their intention to defy the whip over the leadership’s decision to support George Osborne’s new cap on welfare spending:

For the left, the cap is a crude device, designed to perpetuate the Conservatives’ false divide between “strivers” and “scroungers”, and a threat to support for the vulnerable. Under the new limit (set at £119bn for 2015-2016), which includes all benefits except the state pension and cyclical unemployment benefits, the government will have to cut spending if the cap is breached by more than 2 per cent.

The Labour MP Diane Abbott told me she opposed the policy on the grounds that it would “encourage cuts in benefits, rather than long-term strategies to do things to bring the benefits bill down, like housebuilding, like a rise in the minimum wage”. She added that it was “part of a political narrative which demonises welfare claimants. Most of the public don’t understand that half of welfare claimants are pensioners and that another quarter are in work.”

Other MPs who confirmed to the NS that they would vote against the policy included Ian Lavery, Mike Wood and John McDonnell . . .

For now, Labour can dismiss such rebels as the “usual suspects” (as one source did), but were Miliband to enter Downing Street with a small majority, he could be held hostage by his party’s left. Policies such as a welfare cap are precisely the kind of austerity measure that will be required [in order] to meet his strict deficit-reduction targets – and that his backbenchers will seek to obstruct.

The NS’s TV critic, Rachel Cooke, finds herself struggling to excuse a “loopy” exercise in nostalgia, cliché and snobbery by the author Martin Amis:

Responses to Martin Amis’s England (23 March, 9pm) have ranged from mild bafflement (a minority) to tinny outrage (the majority). I’m in the baffled camp – mostly because I don’t have it in me to be truly angry
at the author of Money (or Experience, which I regard, controversially, as his best book). Yes, he says dumb things these days. Yes, he’s starting to sound a bit like his pater. But he’s clinging to his reputation as if to a lifebelt and I can only feel tenderly about that.

Still, you have to wonder – here’s the baffling part – how someone so clever ended up on this occasion sounding so incredibly stupid. Admittedly, the documentary was made for French television and its director had clearly done his best to encourage Amis to reinforce a stereotype popular on the other side of the Channel. (We’re repressed! We like spanking! Some of us fantasise about the Queen!) But he didn’t have to go along with this. Gilding a cliché artfully and with reference to John Milton and Samuel Richardson doesn’t make it any less of a cliché.

The loopiest part was his big idea. You want to know why we drink? (I’m going to assume that you do drink; as Amis noted, one must have “the freedom” to generalise.) Well, it’s all down to the empire, see, the loss of which has left us feeling terribly embarrassed, and so we blot out the shame with booze. Do remember this the next time you’re in Newcastle on
a Friday night.

The historian Anna Whitelock on terror and faith in Elizabethan England

Leo Robson on the cult of the new Nordic Everyman, Karl Ove Knausgaard

The NS science correspondent, Michael Brooks, on the iPhone app that allows you to hear shapes and colours

Real Meals: Will Self on the “useless and destructive” artisan crisp