Mail Online spent much of the weekend chasing the story of Alan Lane and Katrina Smith. A ‘middle-class’ couple, they claim to have spent much of the last few months homeless, living in various terminals at Heathrow. For the Mail and its readers, their downfall is evidence of the state’s failure to support decent hard-working people. Inevitably, an online fund-raising campaign has appeared. At the time of writing it has raised several thousand pounds for the couple.  It’s a happy end to a grim story. The trouble is, not much about the story makes sense.

Those details are easily confirmed via the electoral roll and various property records, with the addition that prior to 2002 they owned a flat in Poole that was sold for £200,000. These are big numbers, though. This is Poole, more than ten years ago. Even in 2015, £295,000 would buy a three bedroom detached house. The £190,000 equity they released from their last sale could have paid for a small house or flat with forty or fifty grand in cash left over.  The £900pm rent they paid would still cover a decent two bedroom flat today. At one point, they cleared a £130,000 profit in the space of two years.

The progression of purchases – from less than £200k, to £265k, to £295k – doesn’t seem to show a family in decline. It’s difficult to understand why someone unable to afford a £700pm mortgage in 2005 would then choose to rent a property for £900pm the next year. As for work drying up, in 2006 Lane was apparently in Beirut, being rescued by the Royal Navy from the war breaking out there. The Bournemouth Echo described him as working ‘in public relations with a large international company.’

Ukraine’s energy grid is teetering on the brink of collapse

Whatever happened to the Conservatives’ “war on cancer”?

“It is not the first time Mr Lane has been caught up in a foreign conflict,” the Echo reported. “He was staying in Lagos in Nigeria several years ago when there was a coup.”

By 2011, five years after selling up, the £190k nest egg had evaporated. It was presumably spent on rent and Kevlar.  Alan was approaching 70, and still struggling to find long term employment. In 2013, a PR job in Canada materialised, but he was made redundant six months later. They returned to the UK, where their furniture was still in storage, and couch-surfed.  Charities and Poole Council were cruelly uninterested in their plight. Alan’s daughters helped out for a while, but in October last year – the route never entirely specified – they found themselves in Heathrow, homeless, five nights a week. (They stayed at a B&B the other nights, according to the original story, to wash their clothes and get a full night’s sleep.)

Here it’s worth turning to Alan’s profile on LinkedIn. According to that, through half of 2010 he was Global Principal Adviser for Rio Tinto. For much of 2011 he was a consultant at ICMM, where he apparently “developed communications strategy on a major Climate Change initiative to promote the Secretariat’s profile at international UN governmental conferences”. Through 2012 and 2013 he was a founding partner at Infinite Latitude, alongside none other than Ulrich Gartner (of Gartner Communications). There was indeed a detour to Toronto in 2013, working for an outfit called ‘FirstPR’, but by November of that year he was a consulting associate at Witt O’Brien’s. 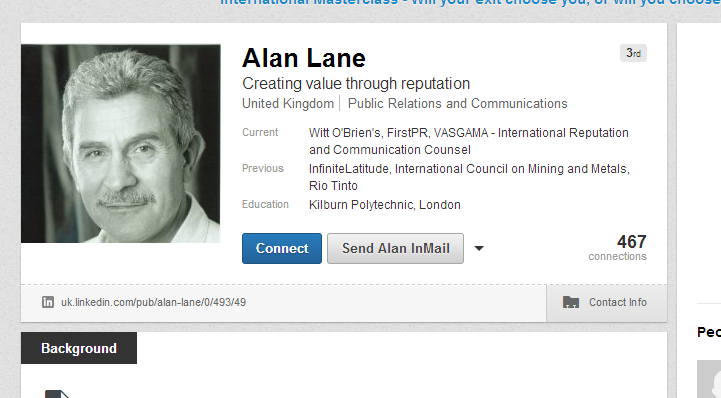 There are some intriguing question marks, though. For 21 years, Lane has been CEO of a company called Vasgama – International Reputation and Communication Counsel. An international consultancy firm claiming to have clients on all continents, I couldn’t find any trace of the firm on Companies House.

Meanwhile, Jana Schilder of First PR has responded to questions on Twitter explaining that Lane was never on their payroll, but was made redundant by another, unnamed firm. He remains an associate with First PR, with a glittering biography on their website and sporadic pay days. In her own Twitter biography, Schilder describes herself as, “PR guru, early trend spotter, Malcolm Gladwell connector, sh*t disturber.”

The man in the suit is still moving then, but is his briefcase full? The couple’s current financial situation is detailed in the Mail’s report. They have a ‘modest income of £1,400 per month’. Assuming we accept their figures, that’s equivalent to a gross salary of £20,000. Katrina could claim an additional £280pm in benefits, but doesn’t. If she did, they’d be earning the equivalent of a decent graduate salary.  Their main costs are £300 that they’re still paying to store a load of furniture, and £480-a-month repaying an loan they took out in 2011. They also spend two nights of the week in a B&B, costing £50 per night, which adds up to another £400pm.

Heathrow is just up the road from where I live, in Maidenhead. You can rent a double room in a professional house here for about £400pm including bills, plus the same again for a deposit. That’s the same as they currently spend on the B&B each month, plus one missed loan repayment. In other words, there is no obvious reason to explain why they can’t move out of Terminal 2 tomorrow morning, cancel their furniture storage, and live a normal life. They earn about the same as I did when I first moved to the area, which likely explains why the local council and charities were unwilling to help them.

Except that they aren’t actually living at Heathrow. At least not at the moment. In the wake of the Mail’s story, several people came forward offering the couple a place to stay. The offers were turned down. “The couple will stay in the B&B for a few more nights as it was prepaid,” reported the Mail, without the slightest hint of curiosity as to how exactly a couple could afford several nights in a B&B but not rent.

It’s worth addressing another rumour at this point. Various people on the Go Fund Me page set up to raise money for the couple have commented that a local B&B has TripAdvisor Reviews in which customers thank the owners, ‘Alan and Katrina’. One blogger even claims to have reached a ‘Katrina Smith’ at the establishment by phone. In fact, the B&B appears to be run by a different Alan entirely, and the property hasn’t changed hands since 2001. I’m pretty certain the names are a coincidence, and in fact the couple have denied owning the B&B in a follow-up for the Mail. (I’ve been unable to reach them for comment on my other queries.)

The truth is, there’s no real evidence to suggest the couple lived at Heathrow either. A survey by the Greater London Authority reported in the Evening Standard last week recorded 103 rough sleepers at Heathrow between October and December last year.  Most were one offs. 31 were classed as ‘intermittent’ while 22 were new and had been seen a few times.  There’s no indication of any long-term residents, and you’d expect a couple spending week after week in a terminal to be known to staff there. I’ve contacted officials at Heathrow to try to verify the story, but being the weekend they haven’t come back to me yet.

Nor has the woman who set up the Go Fund Me page, Natalie Longford.  Donations have been stopped now, with £9,270 raised (the woman running it says she has been assured by the Mail that “full checks” have been done and the couple’s story is “genuine”). The money will replenish the five grand that Alan and Katrina have spent on B&Bs, furniture storage and loan repayments in the last few months. ‘It could happen to anyone’ sums up the general sentiment among donors. But it’s hard to see how.

“There are so many scroungers out there lying and cheating to get benefits,” cries one, “and it’s appalling that genuine cases like yours do not qualify.”

Alan and Katrina aren’t the only homeless people from Bournemouth and Poole. The local YMCA tells some of their stories. There’s ‘Laura’, 17, who was violently abused in foster care and turned up at the hostel too scared to eat in front of other people. There’s ‘John’, 49 who suffered a brain injury that led him to abuse alcohol and attempt suicide twice, or ‘Tony’, who progressed from children’s homes to prison and drug addiction. The YMCA gave him the first set of keys he’d ever owned, and now he’s a college-educated father moving into his own flat with his two children.

These people aren’t presentable, middle class folk. They didn’t spend the last thirty years wandering the globe selling PR consultancy to mining firms. They never owned a property portolio. But none of that makes them less deserving, because in a civilized society we don’t judge people based on their earning potential or their house price – at least not unless we work for the mail. So now that the The Go Fund Me page for Alan and Katrina is closed, if you feel like giving some money to help the homeless, maybe you could start here.