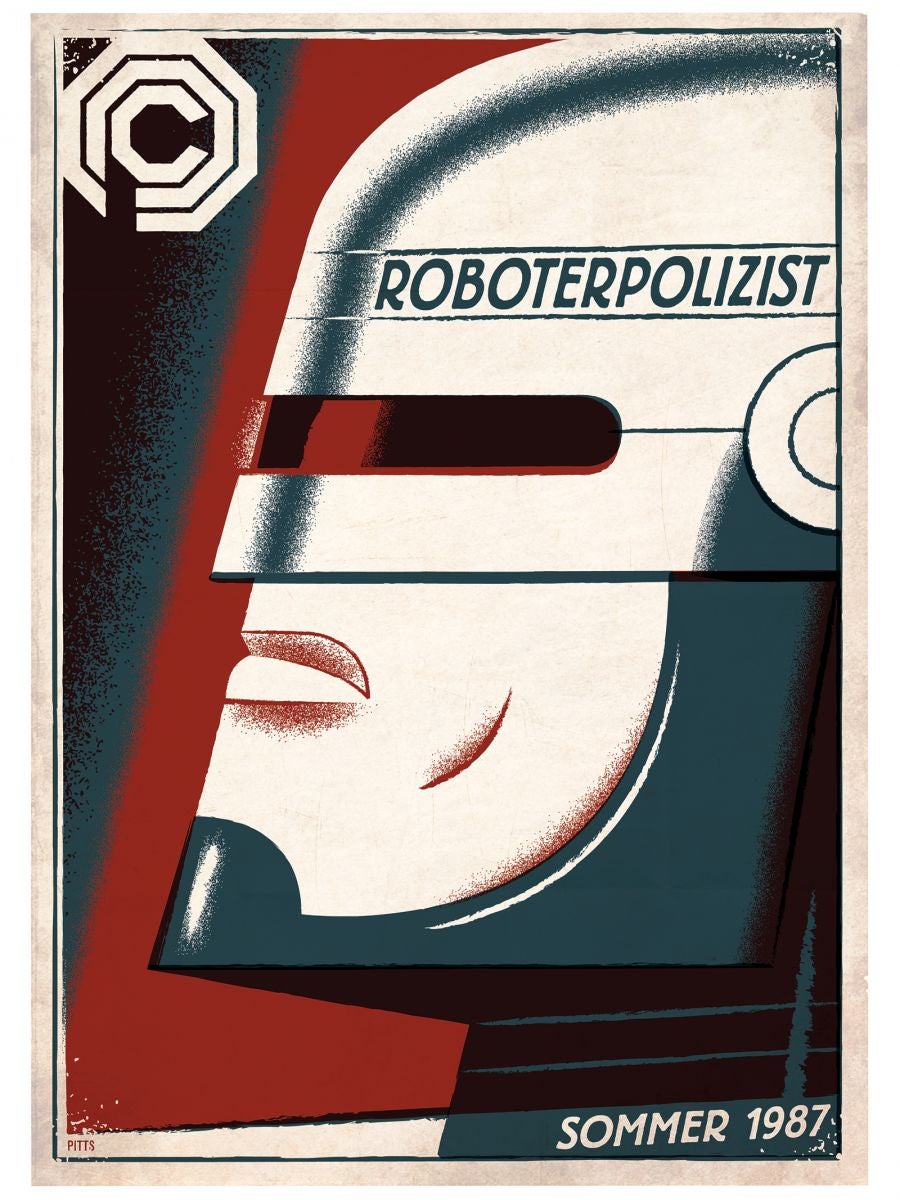 “If in the first act you have hung a pistol on the wall, then in the following one it should be fired. Otherwise don’t put it there.” This advice from Anton Chekhov has developed in the screenwriting business into the law of “Chekhov’s gun”. A Hollywood interpretation of the law might read: “If you put an X on the poster, there’s got to be an even bigger X in the film.” (For X, read: gun, laser, monster, explosion, and so on.)

Ever since the beginning of American cinema, films have been remade – but bigger. “Bigger” in this context means not only bigger budgets and bigger stars and bigger bangs but also bigger pretensions. This month’s example of same-but-bigger film-making is José Padilha’s Robo­Cop, which is an exponential version of Paul Verhoeven’s RoboCop.

A brief flashback to 1987 might be useful. While attempting to bring order to the streets of Detroit in the near future, the police officer Murphy is gunned down by psychopathic drug barons – in an extended scene reminiscent of David Cronenberg at his juiciest. Murphy’s bodily mutilation gives an amoral executive at Omni Consumer Products the chance to advance plans for a cyborg law enforcement officer. (“Part man. Part machine. All cop.”)

In a boardroom power play, the “old man” who heads Omni tells his senior president, Richard “Dick” Jones, to green-light the RoboCop project, after an executive is gunned down by a malfunctioning ED-209 military model robot. As RoboCop begins to bring order to the streets of Detroit, he realises that the man who is ultimately causing much of the civic disorder (for evil corporate reasons) is Dick Jones.

Because he is an Omni product, RoboCop is prohibited by “directive four”, programmed into him, from harming the company’s employees. When he first confronts Jones, RoboCop finds that he can’t arrest him, because his robot parts will not obey his brain. In the film’s final moments, Robo­Cop battles his way up to the Omni boardroom and proves to the old man that Jones is the villain. The boss tells Jones, “You’re fired,” and RoboCop is able to effect justice by shooting Jones, who is no longer an Omni employee.

Padilha’s remake largely follows this plot line but changes almost every detail to make it bigger. I say it’s Padilha’s film but those who wait through the Clash’s “I Fought the Law” until the end of the credits will see that to make films bigger these days, it takes a village or even a small commuter town.

You can tell that everyone involved – apart from the countless stunt people who mainly jump sideways and go “Eugh!” as RoboCop blasts them through the aorta – was straining to achieve some profound personal and geopolitical meaningfulness. Unusually, the film has an American actor, Michael Keaton, as the corporate baddie, rather than the default slimy Brit or hissy German. Gary Oldman brings plenty of ethical dilemmas to the role of Dr Dennett Norton, RoboCop’s Dr Frankenstein, and Samuel L Jackson acts as Shakespearean chorus, replacing Verhoeven’s ironic adverts and news reports with the rhetoric of a tech-loving, proto-fascist talk show host. (“Which begs the question – has the US Senate become pro-crime?”)

Amid the bigger explosions, there are some surprising moments of satire and philosophy that Slavoj Žižek (an admirer of the first film) might be able to make appear significant. But, after the underwhelming climax (at least, compared to that of the original), we’re left blaming the screenwriters for too slavishly firing and re-firing Chekhov’s gun until the thing overheats and jams.

The original RoboCop was a very intelligent movie masquerading as a dumb one. The new RoboCop is the reverse. Paul Verhoeven has made a career of Trojan Horse movies: thick, wooden offerings with smart, subversive contents, the best example being Starship Troopers.

Rather like Michael Mann’s The Insider, which begins with a bravura Middle Eastern, terrorist-related set piece, then turns into something far more inward-looking, Padilha’s RoboCop starts with cyber soldiers and updated ED-209s pacifying the streets of Tehran. In one of the film’s more telling moments, a group of suicide bombers sets out to disrupt the patrol – because it is being broadcast live in the US (on Samuel L Jackson’s gung-ho talk show). “The goal is to die on television,” says the bombers’ leader, Arash. They succeed beyond their aims; the ED-209 is recorded blasting to death Arash’s younger brother, who has rushed into the street armed only with a knife. This media Snafu is a setback for Omni’s owner, Raymond Sellars, who had intended to deploy ED-209s on the streets of Detroit “to save American lives” (and to make the corporation billions of dollars).

The film’s most visually powerful scene occurs when Norton shows the RoboCop Murphy what is left of his body. The robotic parts peel away and the human Murphy turns out to consist of one hand, a pair of lungs swishing around in glass tanks and a brain in a jar. Murphy asks to die but is persuaded to continue living – because of what his death would do to his family.

This is where the new RoboCop becomes dumb. Throughout the film, Chekhov’s gun is held up in front of our face and bullets are loaded. We’re shown Murphy’s wife and son and his mutually nurturing relationship with them. We get the doomed-cop-putting-his-child-to-bed scene. We get the we-have-a-kid-but-still-have-hot-sex scene.

Throughout the film, there is a theological and philosophical argument being put forward. The brain in a jar is pure Descartes. “Free will” comes to the fore as an issue – particularly as Murphy’s dopamine levels are dropped to make him pliable. Jennifer Ehle, an Omni lawyer, scoffs at the idea that something within Murphy might resist all these behavioural restrictions: “Like what, his ‘soul’?”

There’s an equivalent of the first RoboCop film’s fourth directive, which ensures that no Omni employee can be harmed by the company’s product. If that kind of situation arises, everyone assumes, Murphy’s robot parts will not obey his brain. But at the climactic moment when, in the first film, RoboCop needs to hear the words, “You’re fired,” we find that in this bigger version (with its bigger – or soppier – heart), Murphy is able to control his robot parts, override his protocols and kill the man who has just waved a gun at his precious son. Bang! Chekhov’s gun has been fired again – and don’t you feel cheated? Because you saw it coming all along.

The point is not just that a slick film with many good things about it has shot itself in the brain. For sci-fi films, the consequences of screenwriters unthinkingly firing Chekhov’s gun are disastrous; and they are most disastrous when those films are dealing with the consequences of firing pistols or guns or lasers.

Because there are a lot of guns and lasers in Hollywood movies and because those weapons, once introduced, have to be fired, there is bound to be a vast amount of collateral damage. All of this, within the dark morality of the multiplex, is forgivable because what is being sought is justice. And violence – glorious violence, in the service of the law and a grand quest for what is right – is the point of these films.

RoboCop is part of a tradition of sci-fi cop movies that includes Blade Runner (1982), Demolition Man (1993) and Judge Dredd (1995 and the 2012 reboot, Dredd). It is Demolition Man – the most underrated of these – that plays off best against the new RoboCop and its conventional bullet-spraying. Where RoboCop strains for angst, Demolition Man tosses off gags. Yet the hard points about American crime and punishment are still made.

In the film, John Spartan (Sylvester Stallone), a 1990s cop reanimated in 2032 to capture an old enemy, says: “Hurting people isn’t a good thing.” There’s a comic pause while Stallone realises that he’s at risk of undermining his entire cinematic existence: “Well, sometimes it is,” he adds, with a slight moue of that much-punched jaw. “But not when it’s a bunch of people looking for something to eat.”

Demolition Man is the perfect example of an intelligent movie masquerading as a dumb one. (Judge Dredd was merely dumb and dumber.) Starring, or more accurately using, Stallone, its witty script undermines all the clichés that RoboCop is so keen to elevate.

It’s a commonplace of thinking about sci-fi movies that they are westerns in disguise but with RoboCop, it is unavoidable: there’s a new lawman in town and he is, in essence, a gunslinger. One significant omission from the new RoboCop film – perhaps because it’s not angsty enough – is Murphy’s trademark twirl of the weapon before he returns it to the holster in his leg. In the first film, it was this detail that allowed Murphy’s former partner to recognise him, even though he has become an anonymous cyborg. It also allowed US viewers to feel reassured that some things hadn’t changed.

Again, Demolition Man punctures this. Just before the “Hurting people isn’t good” comment, Stallone’s character says, “Look, this isn’t the wild west – the wild west wasn’t even the wild west.” This may be the most insightful line Stallone has ever uttered. And despite being a big, dumb sci-fi movie about a lone, discredited gunslinger brought back into town to arrest an escaped desperado, Demolition Man does an excellent job of undermining Hollywood’s cowboy machismo. Perhaps the funniest instance of this is that, while cryogenically preserved, Wesley Snipes’s villain is programmed to be fluent in all kinds of lethal urban terrorism and Stallone’s hero is taught how to knit.

Ultimately, as a result of Hollywood’s conservatism, if there’s a gun, it has to be fired. If there’s a super-bomb, it has to be detonated (in space or out at sea). For cinema trying to say anything truly interesting about justice, this can be fatal. Only in films that have moments of refraining, of weighing the scales, can we hope to watch justice in action.

We see this at the climax of Blade Runner. Here, a cop decides to let the rogue police officer Deckard (Harrison Ford) and his replicant lover escape. After chucking Deckard’s gun to him, he says, “It’s too bad she won’t live. But, then again, who does?” He sees that justice, in their case, is beyond what the law dictates. The cop has a gun but doesn’t use it.

RoboCop has a gun and does use it. And by having him override his protocols because of his love for his family, the film-makers of this new version undermine what distinguished the original movie: Murphy’s inhumanity, his inability to function beyond the laws and interests of a corporation. All they end up saying is that good people are still good, even if bits of them are made of shiny metal.

“RoboCop” is out now