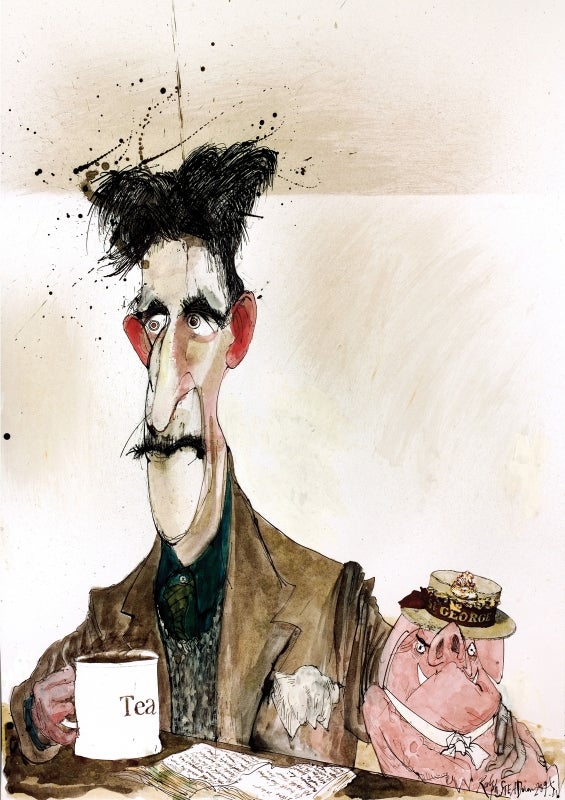 Since whoever we are (save for a few sad Leninists) we all agree with George Orwell, it usually follows that Orwell must agree with us. Whatever our 21st-century predilections, Tory or leftist, conservative or progressive, we discover blessings and endorsements somewhere in Orwell’s words. We grab him for ourselves.

In English Rebel, Professor Robert Colls grabs Orwell for an idea of national affiliation. Colls offsets his attempt by disclaiming any such ambition. “There is no ‘key’ to Orwell,” he writes at the end of his introduction, “any more than he is a ‘box’ to open. His Englishness, though, is worth following through.” A modest grab, then – and, as we shall see, a good grab. But a grab nonetheless.

George Orwell was, argues Colls, “deracinated”. He went to Eton but he was not of the ruling class. He served as a colonial policeman in Burma but he was alienated from the Raj. He became an intellectual who disliked intellectuals, and a socialist who distrusted almost all forms of socialism. He belonged nowhere.

Except, eventually, to England – not Brit­ain, says Colls, which was too abstract an identity, but England. Between coming back from Burma in the late 1920s and the publication of Nineteen Eighty-Four in 1949, Orwell came to understand, and wanted to defend, the peculiar virtues of Englishness as understood and practised by “ordinary” English people. Bluff wisdom resided in the folk of England – whose gentleness and stoicism presumably distinguished them from alien intellectuals and alien peoples. The socialism of Orwell can be moot, Colls suggests, but his Englishness is the most real part of him.

There are several ways in which – quite apart from the success or otherwise of Colls’s thesis – this book is a kind of Orwellian triumph. Colls is a lovely writer, who is fearless in a way that academics too often are not. He is happy to subvert clichés, make little speeches and is willing to permit useful generalisations. A sentence such as the following, concerning Orwell’s class, takes a lot of risks for a good return: “The English class system, home or away, was an exercise in fine weights and measures which only a haunted class like the middle class could understand.”

Colls is full of learning and insight, and is happy to borrow (with attribution) from the wisdom of others. So he endorses Ross McKibbin’s idea that the true beginning of the short triumph of British (and therefore English) “popular left politicisation” was not in 1944 0r 1945, but in 1940 when Winston Churchill proclaimed the republic of blood, toil, sweat and tears.

Before the Second World War altered the world for Orwell, he had returned from exile in Burma, been down and out in the two capitals, written a bad novel and taken himself off to the north of England – where he discovered the working classes. The first part of The Road to Wigan Pier is the travelogue of a southern writer in the northern land, the middle-class boy in the proletarian world.

This might have been an exercise in slumming it (Harry Pollitt, the Communist Party leader and himself a working-class boy, accused Orwell of just that) but it was one for which very few other writers volunteered. “Unlike nearly every London journalist there is (and has been)”, Colls writes, Orwell understood what back-to-back housing was. All I can say is: “Guilty” – perhaps because generations of us could not understand how anyone could build anything so stupid or wicked.

Colls credits Orwell for the effort but, just as Orwell later does for Dickens, not always for the result. Orwell’s workers, he points out, have no pleasures, no organisations, no spokespeople, heroes or political parties.

Orwell finished The Road to Wigan Pier with some thoughts about socialism; and then, nine months after coming back from the north, he left for Spain. Why he did so is rather beyond Colls’s scope, as is almost anything to do with Orwell and Abroad – save for Spain, where Orwell discovers how bloody Abroad can be and how ideology can make people suffer. But, more importantly, he realises that there are great lies being told and obfuscations being made, mostly by the Stalinists. After that (this is me, not Colls), lies and obfuscation become the real enemy. Without them, something may be done. With them, nothing good can happen.

One of Colls’s best chapters is the one dealing with the book Orwell wrote after Homage to Catalonia, the novel Coming Up for Air, composed in Marrakech in 1938. Colls dissects the ambivalent relationship between Orwell and his suburban anti-hero, George Bowling, who is cynical, practical and ordinary. In the book, says Colls convincingly, Orwell un-deracinates. He “declares his reconciliation with his class and his region, however much they have changed”.

You sometimes wonder what kind of biography Orwell would have written of Orwell. Not one, perhaps, in which the author writes of his subject, as Colls does, that “He did not always get things right, but unlike some who lived through the 1930s and 1940s, he did not have to recant or excuse his former associations.”

Colls is open-eyed enough to show how Orwell made almost as many mistakes as anyone else. As “an attack on left intellectuals in general”, writes Colls, Wigan Pier, which fails to acknowledge people such as John Maynard Keynes, is “ludicrous”. In Homage and elsewhere, Orwell “was unrealistic about the Spanish revolution and it took him too long to work out why”. Indeed, “Orwell might have spent a little less time responding to his own situation,” scolds Colls, “and a little more time thinking carefully about the art of the politically possible.” True.

Orwell cannot simply be given a pass on having opposed, from 1937-39, contemplating war with Germany, signing a manifesto entitled “If War Comes We Shall Resist” at the time of the Munich Agreement, asserting the moral equivalence of Britain and German imperialism and arguing the toss against rearmament right up to the summer of 1939. As Colls points out, there were plenty of people who could see what was going to happen. As late as 1940, in the essay “My Country Right or Left”, Orwell “revealed himself as the best and worst of political commentators”. He assented to the war but on the condition of bloody revolution.

“What sort of movement did he think would lead the revolution?” demands Colls. “One led by [Orwell’s publisher] Victor Gollancz? Hardly. One led by Fenner Brockway and the Independent Labour Party? Surely not.”

This was a problem of swift transition. Orwell turned 180 degrees and Colls attributes the volte-face to Orwell’s English patriotism. The country, he discovered – the true country – embodied values worth defending. Values of a practical, gentle, empirical people; people who eschewed any universal ideology, whe­ther it was Marxism, fascism or Catholicism. People who didn’t kill each other because they disagreed over politics.

From “Inside the Whale” and “The Lion and the Unicorn”, to his essays on tea and comics, Orwell espoused Englishness. Colls astutely points out that sometimes – as in the case of “Boys’ Weeklies” – he clearly enjoyed what he seemed to be condemning. He professed to dislike the Church of England but was baptised, married and buried according to its rites.

Although Colls makes a good fist of Orwell the Englishman, in the end he cannot help but give himself away. Twice he mildly berates Orwell for not having observed the first English folk revival. The problem is that this revival was a romanticisation of Englishness, not a reflection of its popular reality. Composers and intellectuals liked it; the people preferred movies, musicals and, later, rock’n’roll.

The nature of the claim Colls makes on Orwell is even more obvious near the end when he imagines what Orwell might have thought had he survived tuberculosis. He says that the working class to which Orwell committed in 1936 was “deserted by the Labour Party (though not the Labour Party by them), and was exposed under New Labour to heavy migrant competition for jobs and resources”, leading to the death of its culture. And “after 1979 Mrs Thatcher would surely have brought his deepest hostilities to the surface”.

Were Orwell around to update his “Politics and the English Language”, he might have fun with that “surely”, which means the opposite. And is it possible that it is Colls who could stand Mrs Thatcher and who thinks New Labour allowed in too many migrants? It is hard not to spot indigo blotches of Maurice Glasman’s Blue Labour behind Colls’s thesis.

Colls argues that at the 1951 Festival of Britain, a year after Orwell’s death, the English knew who they were. By the time they got to the Dome in 2000, they had lost that knowledge. As for the 2012 Olympic Games, they were merely a throwback, a “late celebration of left patriotism”.

As an Englishman with Greek, Sierra Leon­ean, Jewish, Namibian and West Indian blood relatives, I disagree. The theme of the London Games was how the nation has changed and continues to change. It was Mo Farah, Jessica Ennis and the parachuting Queen that constituted the identification. Or, as Orwell wrote (and Colls quotes), “nothing ever stands still. We must add to our heritage or lose it, we must grow greater or grow less, we must go forward or backward. I believe in England, and I believe that we shall go forward.” So thank you, Professor Colls, but now I’ll grab my Orwell back.