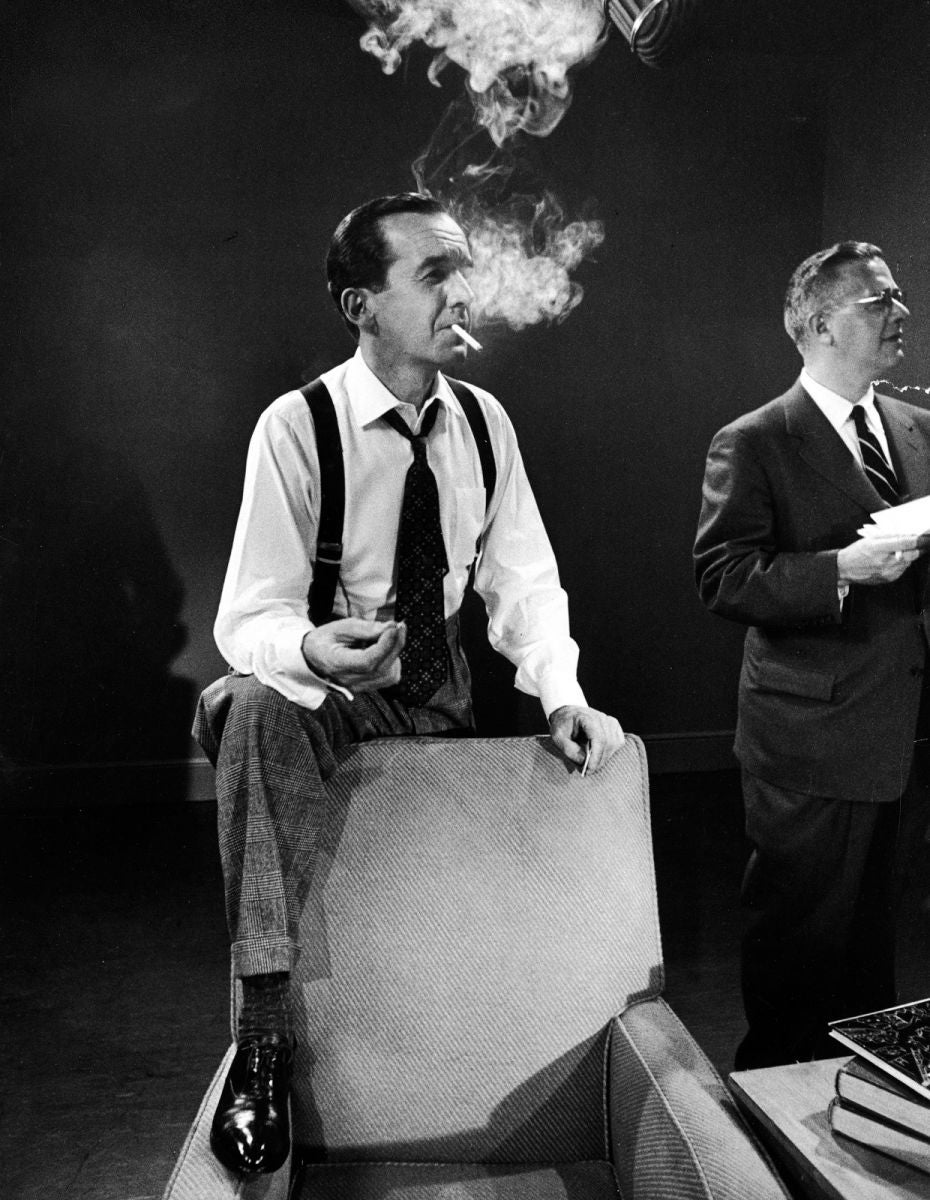 It remains – 50 years after the event – one of the most replayed moments in American television news. Early afternoon, 22 November 1963: a popular, dreary CBS soap opera, As the World Turns, was being broadcast from New York to millions of housebound “home­makers” (to use a particularly grim expression of the era) across the country. Suddenly, the domestic scene being played out was interrupted by the sight of America’s favourite uncle, Walter Cronkite, filling the screen.

Cronkite had a face like Mount Rushmore and exuded homey gravitas – a man who was equally at ease at a White House state dinner or drinking coffee at a truck stop with a Wyoming rancher. He looked more than solemn but was maintaining his anchorman’s sangfroid. An unconfirmed report had just come in from Dallas, Texas, stating that President John Fitzgerald Kennedy had been shot. For the next few minutes, all was confusion – it was the low-tech days of television news and CBS didn’t have a crew, as yet, at Parkland Memorial Hospital, where the president had been rushed. Then there were unconfirmed reports that a priest had administered the last rites to Kennedy.

Cronkite took off his big, heavy, black spectacles (the sort of glasses you’d expect to see on a cost accountant). Then, in a voice that was modulated and reserved, he told the nation: “From Dallas, Texas, the flash apparently official: President Kennedy died at 1pm, Central Standard Time, 2pm Eastern Standard Time, some 38 minutes ago.”

What happened next – and it only lasted ten seconds or so – became iconic. Having announced the president’s death, Cronkite put his glasses back on, only to take them off again, struggling to contain his emotions. But he didn’t break down. Had he done so, he would have violated the stoical “voice of the nation” code. He understood that he needed to hold it together for the country.

If Cronkite had lost it at that horrific moment – the assassination of the prince of our new American Camelot – it would have caused panic. The television news anchorman was, until recently, regarded as a repository of calm in moments of national exigency. He was the one who told the American people, “We can get through this together.” He spoke wisely, without the political agendas and baggage of the president.

Although most countries have their own celebrated newsreaders and commentators, in the US, the anchorman has traditionally been regarded as a sort of village explainer, rising above the machinistic fray, providing clarity, reassurance and wisdom. Long before the arrival of television, Americans always responded favourably to those who ministered to the national psyche. As befits a country that began as a religious experiment – and which, despite the church/state separation embodied in the Constitution, harbours a curious belief that we are God’s preferred nation – the most revered American presidents (Lincoln, Roosevelt, even Washington) are seen as father figures who embodied those virtues that we like to think define the soul of the nation: independence, integrity, moral rectitude. (In reality, despite our talk of family and community, the US still largely operates according to the rules of social Darwinism.)

The very silly and sharp 2004 comedy Anchorman (whose long-awaited sequel has recently been released) brought us into a 1970s world of bad clothes and outrageous sexism. With the whiff of the second city/second rate, the film followed the exploits of Ron Burgundy (played by a hirsute Will Ferrell) – a San Diego television newsreader who is the embodiment of premier cru naffness. 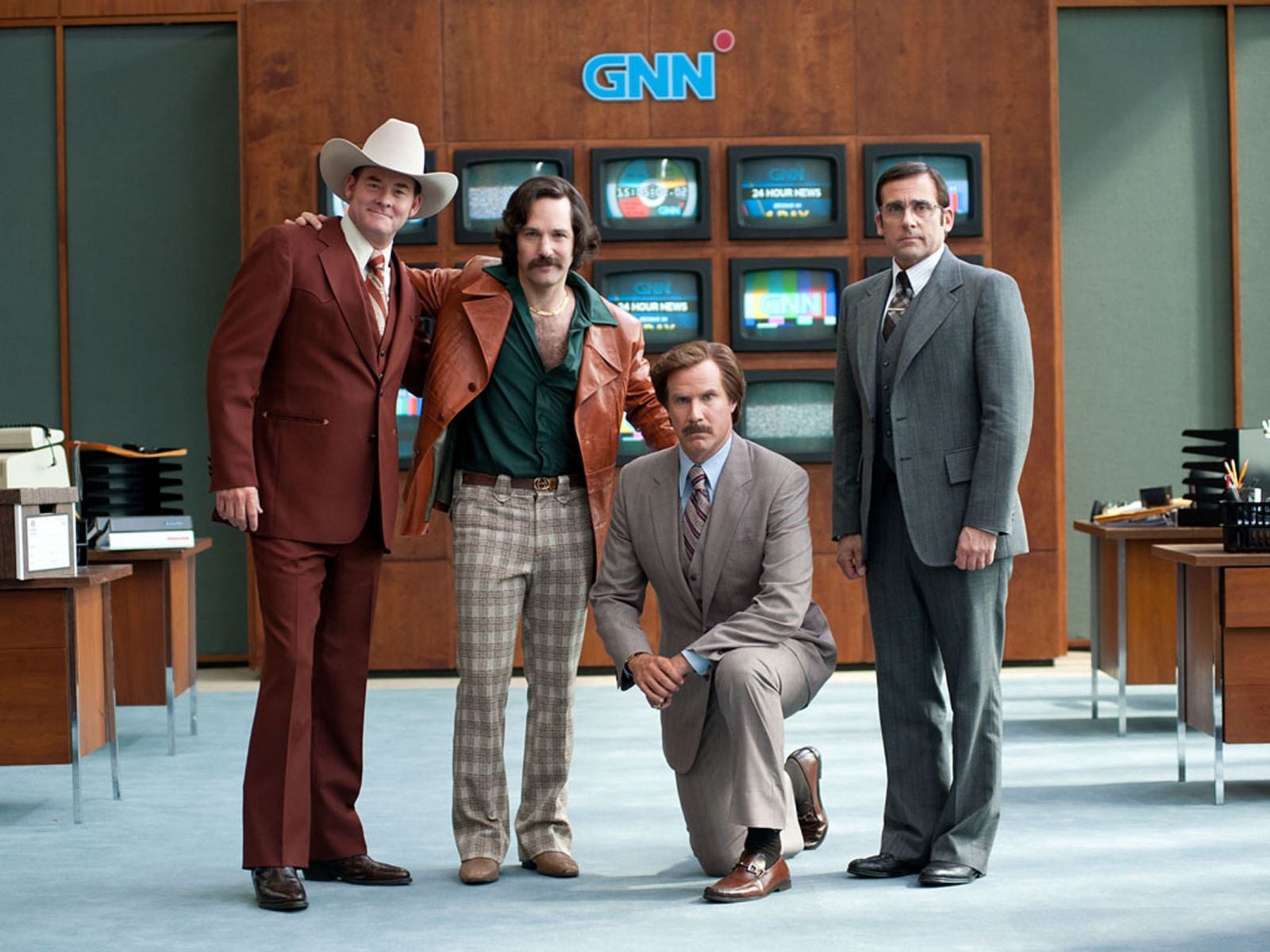 These days, anchormen (and anchorwomen) can be easily mocked for their square-jawed, button-down rigidity (Brian Williams of NBC News), their ideological inanities (Bill O’Reilly, who works for that Pravda of the Republican Party, Fox News), or their all-American wholesomeness (Katie Couric of CBS News, who was that network’s anchor from 2006-2011 and showed her journalistic teeth with a series of interviews with Sarah Palin that was a disaster for the McCain/Palin presidential ticket). In a country where cable TV has been a part of the culture for over 25 years and with the internet now making that one-time staple of national life – the evening news – increasingly irrelevant, the role of the anchor is on the wane.

Yet it is worth remembering how crucial the anchorman was for the first 50 years of American television broadcasting – and also what a canny and essential role he could play in redirecting the national debate. Back in the early years of television, there were three national stations (all still extant today): NBC, ABC and CBS. When it came to the news, CBS was long considered the standard-bearer of televised journalistic integrity, thanks to the 19-year tenure of Walter Cronkite.

Before him, there was Edward R Murrow, an old-school, heavy-smoking journalist who used this new medium as a visual form of investigative mud-raking. To understand the anchorman’s power in the nascent days of television, just consider Murrow’s broadcast in March 1954, at the height of Senator Joseph McCarthy’s witch-hunt. Only half-looking at the camera (in the days before the teleprompter, the newsreader had to keep glancing downwards), Murrow almost single-handedly instigated the rapid political demise of that “reds under the bed” opportunist, who had destroyed so many lives, with one of the most fiercely eloquent castigations ever delivered against a politician:

We must not confuse dissent with disloyalty. We must remember always that accusation is not proof and that conviction depends upon evidence and due process of law. We will not walk in fear, one of another. We will not be driven by fear into an age of unreason . . . The actions of the junior senator from Wisconsin have caused alarm and dismay amongst our allies abroad and given considerable comfort to our enemies. And whose fault is it? Not really his. He didn’t create this situation of fear; he merely exploited it – and rather successfully. Cassius was right. “The fault, dear Brutus, is not in our stars, but in ourselves.”

Then Murrow signed off with his trademark line: “Good night and good luck.”

Can you imagine an anchorman today getting away with quoting Shakespeare and not being labelled an eastern elitist by the Sarah Palins of the world? Yet Murrow was not the last US anchorman to use his position to speak out against wrong-headedness or malfeasance in the body politic. Walker Cronkite raised public doubts about the wisdom of Lyndon Johnson’s Vietnam strategy in a broadcast that helped shift opinion away from the escalation of that desperate misadventure. Having visited Vietnam, he made the following declaration on his news broadcast on 27 February 1968:

To say that we are closer to victory today is to believe, in the face of the evidence, the optimists who have been wrong in the past. To suggest we are on the edge of defeat is to yield to unreasonable pessimism. To say that we are mired in stalemate seems the only realistic, yet unsatisfactory, conclusion . . . It is increasingly clear to this reporter that the only rational way out then will be to negotiate, not as victors, but as an honourable people who lived up to their pledge to defend democracy and did the best they could.

Similarly, the beginning of the end of the Nixon administration started when John Chancellor of NBC News delivered this measured broadside against the president during the Watergate crisis, on the evening that Nixon perpetrated the “saturday night massacre” in October 1973. Chancellor’s broadcast ended with this coup de grâce: “In my career as a correspondent, I never thought I’d be reporting these things.”

Nixon left office less than a year later. Chancellor’s firm, modulated tone of righteous indignation augmented the seismic public shift against the president that resulted in his resignation in August 1974.

The news anchor, with his paternal gravitas, was almost always a man. The first Anchorman film charts what happens when a woman anchor is introduced to the San Diego station dominated by the alpha male Ron Burgundy. The result – shock, disgust, fear and then all-out attack – is a fairly accurate reflection of what happened in 1976, when Barbara Walters became the first female anchor on a network evening news show, co-hosting with Harry Reasoner, at ABC. Reasoner reportedly dismissed Walters’s appointment as a stunt and threatened to quit. He did little to hide his discomfort on air: “Reasoner . . . seems as comfortable on camera with Walters as a governor under indictment,” the New Republic observed. It was another 30 years before one of the big three networks could boast a solo female evening news anchor, when Katie Couric started at CBS in 2006.

Major corporations began to buy up the big networks in the Reaganite 1980s. And with the arrival of Murdoch’s Fox News in 1996, the US was introduced to a newfangled form of television news that – though proclaiming itself as “fair and balanced” – was unapologetically ideological.

Still, the old-school anchorman, as represented by the last three upholders of this patriarchal role – Peter Jennings of ABC, Dan Rather of CBS and Tom Brokaw of NBC – played crucial calming roles during the terrorist atrocity that was 9/11. All three men had been seasoned reporters (covering world events and wars and working as foreign bureau chiefs) before being given the big job talking to the nation as the face of the nightly news.

Brokaw has now retired. Jennings died of lung cancer. And Rather’s career hit a serious skid courtesy of George W Bush, after he raised questions about a dossier purportedly written by the president’s former commanding officer about Bush’s time in the Texas Air National Guard. (The documents were later alleged to be forgeries, though in an interview after he left CBS News, Rather insisted otherwise, noting: “Nobody has proved that they were fraudulent, much less a forgery . . . The truth of this story stands up to this day.”)

The big three networks still try to promote their new anchors as the people you trust for the news. And every local affiliate has its own anchors, looking grave as they report a five-car pile-up on the interstate or smiling broadly when announcing that a high school cheerleading squad has been picked to perform at some big American football match. Fox News’s anchors continue to espouse the rightwards march of the Republican Party. Over on MSNBC, American progressives now have – in anchors such as Chris Matthews and Rachel Maddow – intelligent liberal voices in the midst of the cultural wars that have so shaped and divided American life since the 1960s.

In an age of Twitter and 24-hour digital news, we need more than ever a voice of informed reason to steer us through the chaos of national and global events. But, presumably in an effort to maintain ratings, the evening news is so often laden down with soft-focus “human interest” stories that the anchorman’s role has been denuded. Who now can tend to America’s psyche? We long for a Walter Cronkite or Edward Murrow – but we’re left with Ron Burgundy.