Today is the 106th anniversary of the birth of feminist philosopher Simone de Beauvoir. The 106th anniversary of an event isn’t a particularly special one most of the time – the debates kicking off at the moment over the causes and legacy of the First World War are happening in the centenary of the year the war began, not waiting until 2020, after all – but nevertheless, the big news sites are all covering it.

Here’s the Guardian (twice!), here’s the Telegraph, here’s the Mirror, here’s the Independent (also twice!), here’s Le Matin, here’s CNN Turkey, here’s a stock investment analysis site called 4-traders, here’s Poland’s Gazeta. Those are just a sample of how many sites, around the world, all chose to host the same story on the same day, and from the same angle.

Click any of those links and you’ll see why – she’s in today’s Google Doodle. Indeed, try searching for Simone de Beauvoir on Google today, and no fewer than four of the top seven results are links to news stories about her being “honoured” with a Doodle: 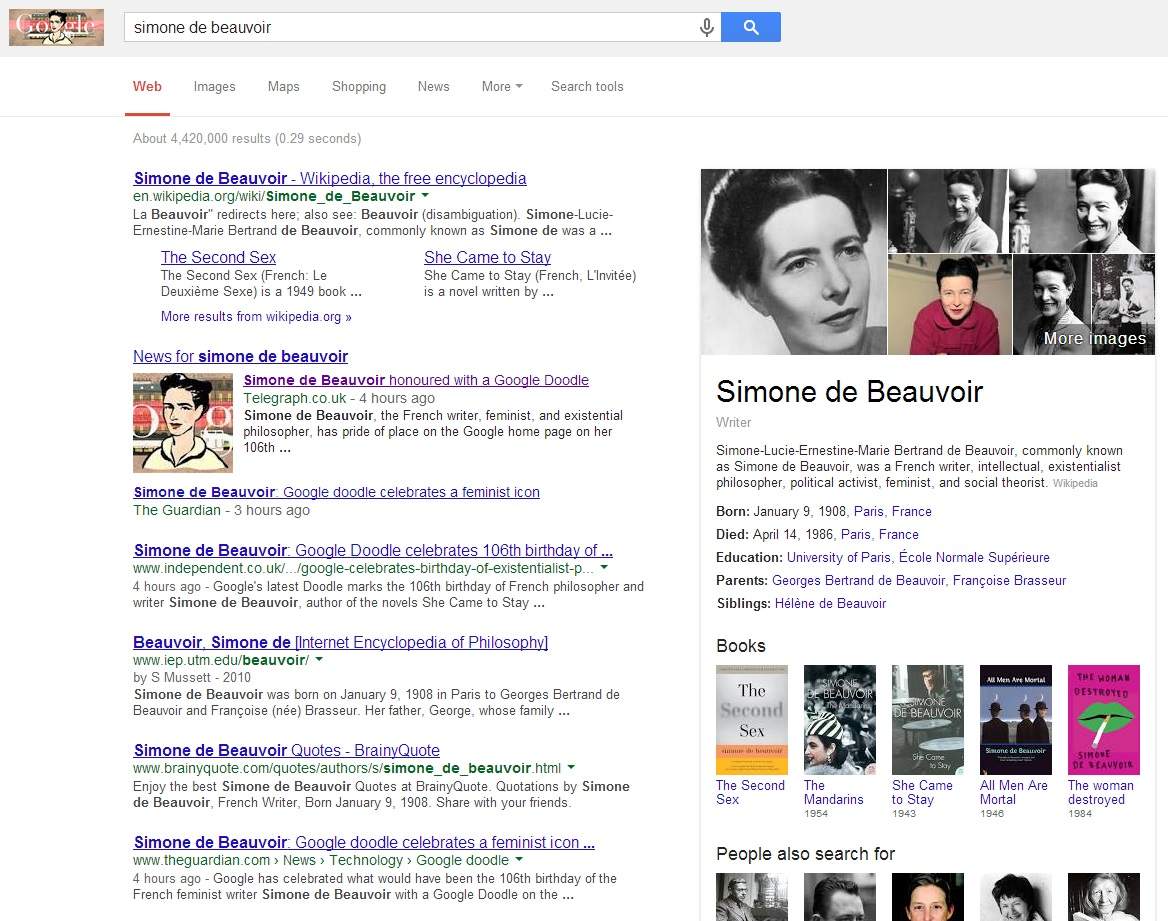 It’s even clearer that it’s the Doodle, not de Beauvoir herself, that’s the real news story, if you search on Google News for her name: 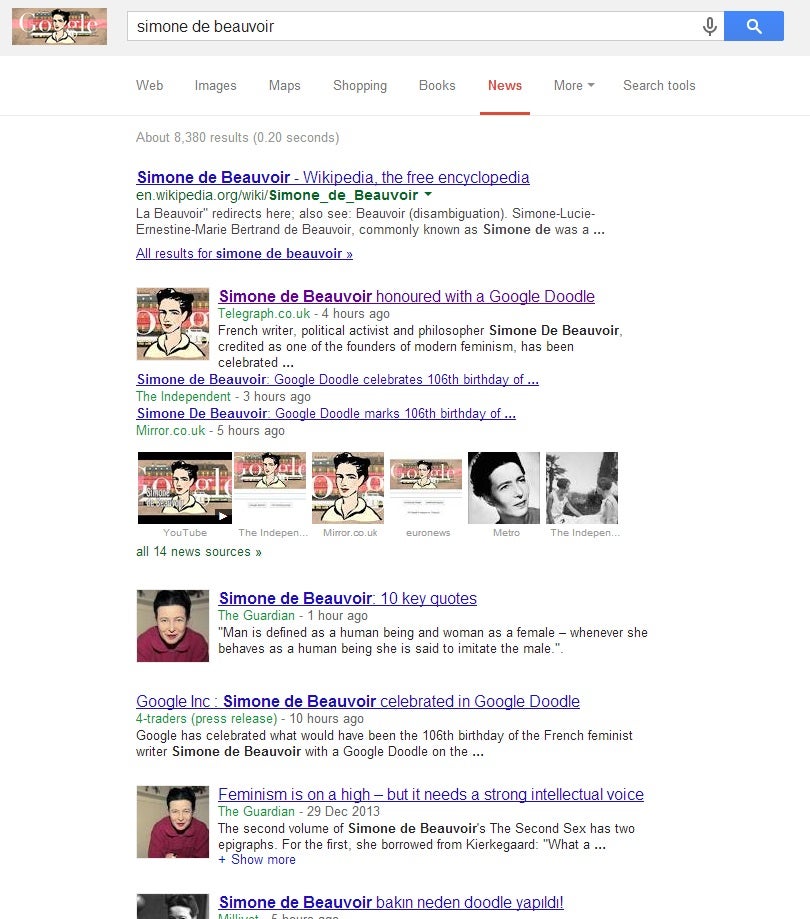 These articles are all basically the same when you read them: Simone de Beauvoir’s in a Google Doodle, and here’s a few paragraphs outlining who she was and why she deserves it. In fairness to the Guardian, which ran a special series of Comment Is Free articles on de Beauvoir on the centenary of her birth, she’s not an unusual subject. The others though? Not so much. Can’t find anything on the Telegraph‘s site about de Beauvoir’s 100th birthday, nor any other mentions outside of a few book reviews. Search the Mirror’s site and the only other mention of de Beauvoir is in an article about another philosopher, Kierkegaard, getting the Google Doodle treatment. And you can be sure that that stocks site hasn’t dealt with her before either.

Here’s the page where every single Google Doodle is collected, most of which appear on all of Google’s regional sites. That helps newspapers in Europe and the US which want hits – they can see what goes up on Google’s Australian homepage hours before it goes live in their own region. Put together a quick article, push it live fast enough, and that’s a spot on the results page for a famous historical figure staked out for a few days.

Rather than say this is a good or a bad thing – and I’ve written those types of articles before, so I’m not going to claim innocence – it’s more an interesting example of the incentives that digital journalists are confronted with. What matters in online journalism is the speed of publication, not necessarily the quality, because that correlates to the greater number of shares, clicks, engagements, whichever metric you prefer.

The algorithms that Google’s News page uses also rely on the size and perceived readership of the sites it features, along with the number of articles it puts out a day, along with other factors, to decide which stories to promote and which to ignore. In the case of Google Doodles, we can see the emergence of a symbiotic relationship: Google’s choice of a person or topic gives newspapers an easy topic to cover with guaranteed interest from a key source of traffic, keeping them near the top of the News rankings for other topics; while Google gets traffic to its services from people made aware of its cute little commemorative cartoon or game.

Google, then, creates the news (or at least some news), and has the ability to raise awareness about niche topics or person who are perhaps not particularly well catered for by the media most of the time (see: the Telegraph covering the birthday of an important feminist thinker). Two days ago the Doodle commemorated the 123rd birthday of Zora Neale Hurston, an African-American author and anthropologist, in the US, a fascinating figure I had absolutely no familiarity with and which I’d have remained ignorant of if I hadn’t been looking into Doodles for this article. So thanks, Google. Just be epistemologically aware that you can, to an extent, game your search results.