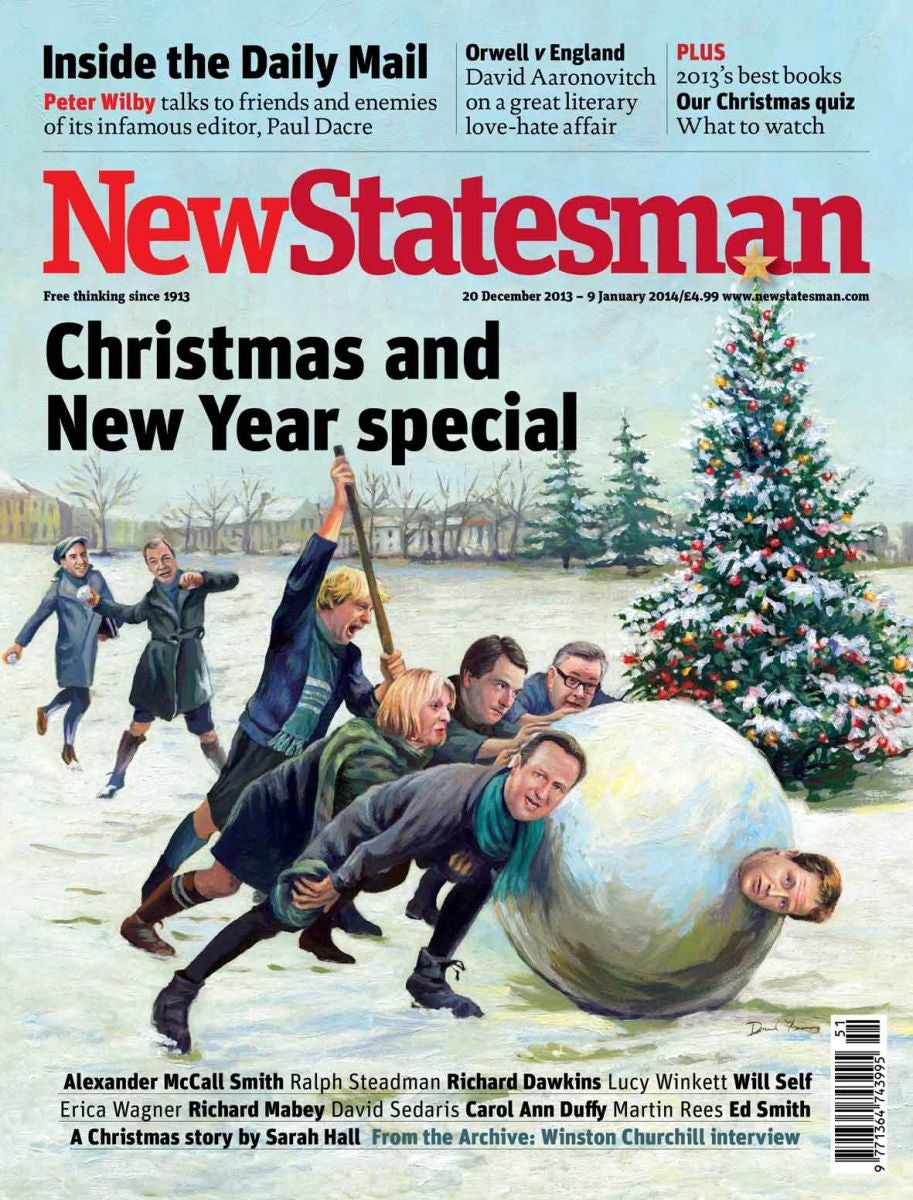 NICHOLAS CLEE: HOW I LEARNED TO LOVE AMAZON

THE POLITICS COLUMN: RAFAEL BEHR ON WHY CAMERON AND MILIBAND FAILED TO MAKE PEACE WITH THE PAST IN 2013

ALEXANDER McCALL SMITH NAVIGATES THE ETHICS AND ETIQUETTE OF CHRISTMAS

MEHDI HASAN: LITERALISM PLAGUES ALL RELIGIONS, NOT JUST ISLAM (read the column in full below)

DAVID SEDARIS REMEMBERS HIS “BROKE AND COLD” WINTER OF 1983

THE REAL ANCHORMEN: DOUGLAS KENNEDY ON THE RISE AND FALL OF THE AMERICAN NEWSREADER

IAN STEWART ON WHAT OPTICAL ILLUSIONS TELL US ABOUT OUR BRAINS

This week, Peter Wilby explores the Daily Mail and talks to friends and enemies of its infamous editor, Paul Dacre. What is the secret to Dacre’s success?

Everyone who has ever worked for Dacre, who has just passed his 65th birthday, praises his almost uncanny instinct for the issues and stories that will hold the attention of “Middle England”. No other editor so deftly balances the mix of subjects and moods that holds readers’ attention: serious and frivolous, celebrities and ordinary people, urban, suburban and rural, some stories provoking anger, others tears. No other editor chooses, with such unerring and lethal precision, the issues, often half forgotten, that will create panic and fear among politicians.

Former employees (who ask to remain anonymous) give Wilby an insight into the feared newspaperman’s ebullient management style:

Dacre has few social graces and even less small talk. His body language is awkward, his manner prickly. He seldom smiles and, according to one ex-columnist, “He doesn’t laugh, he just says, ‘That’s a funny remark.’” He treats women with old-fashioned courtliness, opening doors and helping them with coats, but is otherwise uncomfortable with them, perhaps because he was one of five brothers, went to an all-male school and has no daughters. He speaks gruffly, with a slight north London accent and an even fainter trace of his father’s native Yorkshire. He sometimes buries his rather florid face deep in his hands, as though exasperated with the world’s inability to share his simple, common-sense values. He became notorious for the ripeness of his language – so frequent was his use of the C-word, almost entirely directed at men, that his staff referred to “the vagina monologues”.

Wilby points out that while Dacre shows no signs of slowing down after two decades at the helm, his contract has been renewed for only one year. With Geordie Greig, the 53-year-old editor of the Mail on Sunday, rumoured to be waiting in the wings, what does the future hold for a Daily Mail without Dacre?

Over the two decades of his tenure, the paper has seemed to defy time and gravity. He has no truck with the fashionable and transitory and he acts, in effect, as a one-man focus group. “The question asked about a story at the Mail,” says a former editorial executive, “is not ‘Will it interest the readers?’ but ‘Will it interest the editor?’”

His paper is suffused with a nostalgia for a lost Britain. The formula is unique and it will probably be impossible for a successor to reproduce it with anything like Dacre’s manic energy and conviction. Greig, an urbane and sociable Old Etonian and former Tatler editor who is descended from a long line of royal courtiers, would be a very different editor.

“If Dacre goes, it will be the end of the Daily Mail,” says a former columnist. “Dacre is a great man, in so far as journalism can produce great men. I know the left will be cheering when he goes but, believe me, the rich and famous will cheer more.”

THE POLITICS COLUMN: RAFAEL BEHR ON THE GHOSTS OF POLITICS PAST

The NS political editor, Rafael Behr, reflects on 2013 in his final column of the year and argues that for both David Cameron and Ed Miliband it was a period “in which hope of owning the future was sabotaged by an inability to make peace with the past”. Cameron, says Behr, allowed his party to indulge in 1980s nostalgia after the passing of Margaret Thatcher in April and appeared to move away from modernisation and towards the old “nasty party” image. Behr points out that:

. . . just as Cameron failed to move out of Thatcher’s shadow, Miliband missed an opportunity to define himself in positive terms against the past. With sufficient confidence (and support in the parliamentary party), he might have leapt free from New Labour ultras and hard-left reaction in a single bound. Instead, for much of 2013, it looked as if old factions were wrestling for control of the party’s identity, with its leader cast as a spectator.

It is the new wave of younger MPs that could help both parties shake off the past, says Behr:

More significant was the promotion of MPs who were elected for the first time in 2010 – Tristram Hunt, Rachel Reeves, Gloria De Piero, Emma Reynolds – “clean skins” who are neither scarred nor contaminated by New Labour-era civil war. Miliband’s hope is that this generation will help convince voters his party has a new, forward-looking agenda shaped by its current leader, when the Conservatives are determined to present him as a throwback to an unelectable past. Labour’s class of 2010 is marked by a capacity, lacking in many of their older colleagues, to view the strengths and weaknesses of Blairism without personal rancour. As one young shadow cabinet minister puts it: “Who gives a toss about all that baggage? We just want to win.”

On the Tory side, too, much hope is pinned on recent recruits. The lower and middle ranks of government are now stuffed with young MPs – Liz Truss, Matthew Hancock, Esther McVey, Sajid Javid. Like their Labour counterparts, they have a view of their party’s future that is not jaundiced by rigid nostalgia and historic resentments. Most do not fit neatly into categories of “moderniser” or “traditionalist”. They often combine social liberalism on issues such as gay rights with ultra-Thatcherite economics.

Following in the footsteps of Mary Robinson and Caitlin Moran, the former NS guest editor Richard Dawkins is the latest contributor to our “What Makes Us Human?” series, in partnership with BBC Radio 2’s Jeremy Vine show. Dawkins concludes that a thirst for knowledge is one of the defining human characteristics:

The human mind has reached out to the wider universe and far beyond the time constraints of a human lifespan. We now know that the world limiting our ancestors’ brief lives is a tiny speck orbiting a small star among some hundred billion stars, in an average galaxy among some hundred billion galaxies. We know that the world began 4.6 billion years ago and the universe 13.8 billion. We understand the evolutionary process that generated us and all DNA-based life.

There’s plenty that we still don’t understand, but we are working on it. And the urge to do so is perhaps the most inspiring of all the unique qualities that make us human.

From the archive: Kingsley Martin meets Winston Churchill in 1939

Caroline Crampton on the choristers who work all Christmas

Stuart Burrows on the spectacular 2013 comeback of The Great Gatsby

A crêpe jambon, oeuf et fromage is Will Self’s meal of the year

Rachel Cooke on what to watch on TV this Christmas