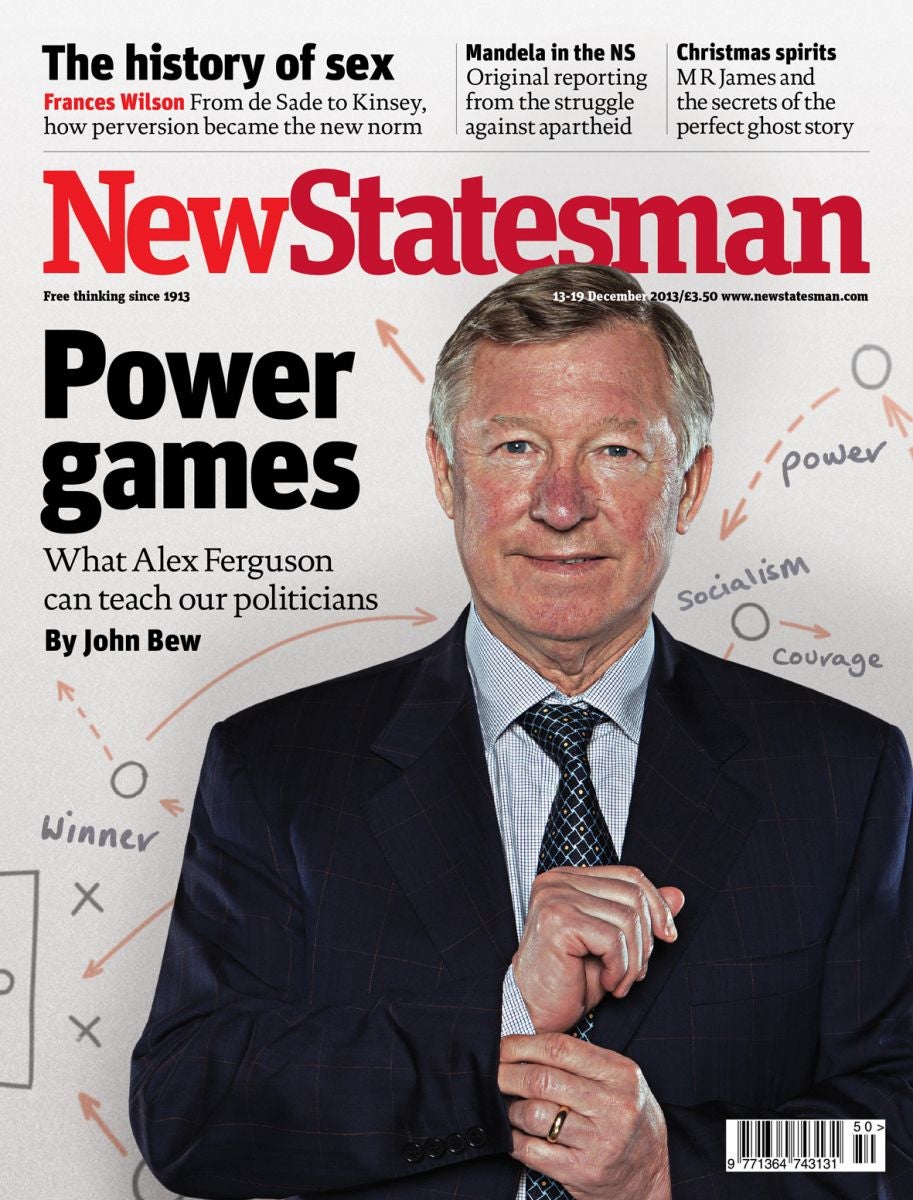 PLUS STEVE YATES ON THE NEW BIOPIC OF THE LATE ICON

ANTHONY SELDON ON THE REAL ETON RIFLES: THE TRUTH ABOUT PUBLIC SCHOOLS AND THE FIRST WORLD WAR

THE POLITICS COLUMN: RAFAEL BEHR ON WHAT DAVID CAMERON AND ED MILIBAND HAVE IN COMMON

SOPHIE McBAIN MEETS FAWZIA KOOFI, THE WOMAN WHO WANTS TO BE AFGHAN PRESIDENT

LAURIE PENNY ON THE PUBLIC SHAMING OF SEX WORKERS

This week the NS remembers the life and considers the legacy of Nelson Rolihlahla Mandela. The NS editor, Jason Cowley, recalls his first visit to the country in 1998 when many were fearful of what would happen after Mandela had served his only term as president. But, Cowley asks, was Mandela “too willing to forgive his Afrikaner oppressors and too reluctant to challenge the corporate power structures that, on the whole, remained in place after the end of apartheid”?

The issue includes a reprint of a report by Sarah Baxter which appeared in the NS in April 1994 as South Africa stood on the brink of widespread violence following the assassination of Chris Hani, the leader of the South African Communist Party. The NS columnist Ed Smith remembers a visit to South Africa still earlier – in 1992 – when, as a 15-year-old on a school cricket tour, he felt “pincered by the double prejudice” of South African blacks and whites. Just three years later at the Rugby World Cup final in Johannesburg, writes Smith, Mandela saw how sport could transcend political divisions: “when he pulled on the Springbok jersey, Mandela found the image that perfectly captured his political message of liberal reconciliation”. Finally, Steve Yates talks to the film producer Anant Singh about the 18-year journey behind Mandela: Long Walk to Freedom, the new biopic of the late icon.

For this week’s cover story, the award-winning historian and NS contributing writer John Bew breaks one of his own cardinal rules – to avoid “the unnecessary intellectualisation of football, a simple game made complicated by idiots” – in order to consider “the political thought of Sir Alex Ferguson”. What values and attributes enabled a man who started life in the working-class shipbuilding hub of Govan, Glasgow, to enjoy a long, successful and highly paid career managing “the most popular and valuable sports team in the world”?

We are not used to individuals who combine professional dominance with such longevity. Most political careers end in failure. Ferguson was able to step down in triumph at the time of his volition after winning the Premier League, the last of 49 major trophies. Our statesmen are lucky to have ten years at the top – a time span not dissimilar to the career of the average footballer.  . . there has been no shortage of efforts to clone his creed. At the last count, more than 30 of his former players have followed him into management.

So can the highly successful “Ferguson formula” be replicated in politics, asks Bew?

The Ferguson formula is not transferable because he is a product of a British world that is almost extinct. What he embodied was a non-southern version of success, born in Britain’s industrial heartlands and tied closely to the values and self-image of the skilled industrial working class. The binds of family and community were the bedrock, particularly through hard times. Within this, there was room for individual force of will and the possibility of social mobility – through a combination of learned expertise and personal responsibility. . . This form of Britishness, which once had a natural home on the left, played a great role in the shaping of this nation but as a result of social, economic and political changes, it has dwindled and almost disappeared.

Bew concludes one of the secrets of Ferguson’s success is adaptability:

Both in his professional conduct and his personal world-view, Ferguson has demonstrated an ability to look beyond his immediate world without rejecting it. Indeed, he has harnessed the best qualities from whichever locale he has operated in but never followed a mantra to the point of subservience and superstition. More than anything, the defining characteristic of his managerial technique has been his approach to change. This has not simply been to accept it as a fact of life, but to anticipate and shape the future.

The shadow justice secretary and shadow minister for London, Sadiq Khan, talks to the NS’s George Eaton about his frustration with the London mayoral “beauty parade” and “ego politics”, why he thinks London needs 800,000 new houses and why he’s supporting the introduction of a mansion tax.

For Khan the three biggest issues facing the capital are:

“housing, housing, housing”. Having grown up on a council estate in Earlsfield, south London, before his father, a bus driver, saved enough to buy his own home, he tells me: “I understand how important council housing is. I actually think it’s got so bad that housing is the single biggest challenge facing London politicians of my generation.”

While Ed Miliband has pledged to build at least 200,000 homes a year by 2020 if Labour is elected, Khan points out: “The number of new houses we’ll need in London is, according to councils, 800,000 . . . it’s arguable that London could take it all. We’ve got big, big questions and no one’s talking about them.”

Is Khan launching his own pitch for the mayoral nomination, asks Eaton? Khan refuses to deny he has an interest:

“I think the job of a conscientious, hard-working shadow minister for London is to bring together the best ideas in the business and do this booklet. If I was running for the job of mayor of London, this would not be the time to be having long, deep discussions about the future direction of London, but I think it’s important for London’s future and for Labour’s future. I’m not interested in a beauty parade or a contest of personalities.”

Khan, who supports the introduction of a mansion tax, has little patience for Labour colleagues Tessa Jowell, David Lammy and Diane Abbott, who would block the shadow chancellor’s proposal:

“All I say to colleagues, in the kindest, politest way, is: ‘Actually, you look at the bigger picture. Are you in favour of trying to help those who own the least by giving them a new rate of tax at 10p? If you are, then ask yourself how you go about doing that.’”

Khan explains that frustration with the London mayoral “beauty parade” recently led him to pull out of an event hosted by Progress at which Jowell, Lammy and Abbott were speaking:

“When I was first asked to do the Progress event, I was told it was going to be a forum to discuss ideas about London and it was quite clear to me that it was turned into a beauty parade,” he says. In an uncoded rebuke to those already positioning themselves to win the mayoral selection contest, he adds: “I’ve got no interest in playing ego politics. It’s about me making sure that I do the job I’ve been given as shadow minister for London with the seriousness it deserves.”

In a column dictated to his British lawyer Clive Stafford Smith, Guantánamo Bay detainee Shaker Aamer, who has been behind bars for 12 years without being charged of any offence, explains the eccentricities of the Gitmo censorship policy:

Clive Stafford Smith comes to see me every three months or so. I ask him to bring me books. When I am allowed to read, it lifts – for a short while – the heavy gloom that hangs over me. Clive amuses himself (and me) by testing what the censors will let through. It is difficult to identify any consistent or logical basis for the censorship: in months gone by, I have been allowed to read Nineteen Eighty-Four by George Orwell, but Aleksandr Solzhenitsyn’s The Gulag Archipelago did not make it through.

On his most recent visit in October, Clive gave me a list of the titles he had dropped off for me, so I could let him know later what had been banned by what I prefer to call the Guantánamo Ministry of Information. One was Booky Wook Two by Russell Brand. I understand that Brand uses too many rude words. I suppose you have to be amused by that: the US military is solicitous of my sensitive nature, and wants to protect me from swearing. These are the same people who say that all of us at Guantanamo are dedicated terrorists

THE NS ESSAY: ANTHONY SELDON IN DEFENCE OF THE PUBLIC-SCHOOL RECORD IN THE FIRST WORLD WAR

In this week’s NS essay, Anthony Seldon, master of Wellington College and author of “Public Schools and the Great War”, challenges the long-held assumption that rank and file soldiers suffered more than public school-educated officers in the First World War and that the horrors of the trenches were exacerbated by a pervasive public-school ethos.

They [public school men] died at nearly twice the rate of the other British soldiers who fought in the First World War. Yet today, the common view is that deluded public school products were responsible both for the folly of taking the country into the war and fighting it with shocking callousness towards the ordinary soldier.

Public schools are firmly in the dock, accused of the contradictory positions of utilising clinical efficiency in killing and of amateur incompetence and other-worldliness. . .the time has come for a fresh look. Were the top commanders as uniformly inept and callous as widely believed? Were the generals acting out some public-school fantasy, or were their decisions coloured more by their prolonged exposure to the uncompromising military strategy of the time? Were the junior officers, whose thinking was powerfully shaped by their recent experience of school, shallow and unfeeling? Were the schools homogeneous authoritarian factories, or did some produce sensitive and rebellious young minds? Was the “public school ethos” what it has been made out to be?

Seldon finds many officer products of schools such as Eton, Wellington, Radley and Uppingham did their utmost to serve the men in their care. He finds, too, that “public school alumni served their fellow men as doctors and chaplains” and “were often in the vanguard of criticism of the war”.

THE POLITICS COLUMN: RAFAEL BEHR ON WHAT CAMERON AND MILIBAND HAVE IN COMMON

As the Independent Parliamentary Standards Authority (Ipsa) rules MPs deserve an 11 per cent pay rise, NS political editor Rafael Behr argues in this week’s politics column that “voters may be more receptive to the case for well-paid politics if they thought they were getting a more representative set of recruits for their money”. Yet neither of the leaders of the two main political parties have anything like representative backgrounds, Behr argues. Even though they come from very different social backgrounds, both David Cameron and Ed Miliband grew up in political families and were always destined for political careers:

The differences between David Cameron and Ed Miliband are vast enough to obscure the one thing they have in common. They both went into politics because it seemed like a natural thing to do – a feature that also distinguishes them from the majority of the population.

Both men are products of rarefied social spheres that made a career in Westminster obvious and available. Cameron, Eton educated and aristocratically connected, became a Conservative. Miliband’s upbringing at the top table of North London’s Marxist intelligentsia propelled him in the opposite direction. Talent explains their subsequent progress but neither man set off on a path marked by resistance.

Will Self on the “new cobblers” written on modern sweatshop clobber

Let the Right One In at the Royal Court