All writers are thieves, robbing graves by night and even by day. As one myself, only rarely do I wag my finger at this form of kleptomania, but in the case of ITV’s Lucan (11 December, 9pm), written by Jeff Pope and based on John Pearson’s 2005 book, The Gamblers, I find that I’m unable to do anything but play the judge. This series – yep, it’s in two parts – isn’t a work of art. It’s a plodding, moderately well-acted thing (with one catastrophic exception, which I’ll come to in a moment) that treads thoroughly tired ground in the name of nothing but ratings. This makes it pretty cheap, in my view.

Meanwhile, Lord Lucan’s widow, Veronica, is still alive, as are his three children, Frances, George and Camilla. So, too, is Neil Berriman, son of Sandra Rivett, the nanny Lucan bludgeoned to death with a piece of lead piping on the night of 7 November 1974, in what appears to have been a case of mistaken identity (the earl was really hoping to bash in the head of his wife, from whom he had recently separated). How grim for all these people. They have my sympathy.

The series does, however, give us the opportunity to examine one of television’s greatest failings: its conviction that toffs aren’t really worth properly fleshing out, even that they might not be capable of deep feeling. I’m sure Lucan and his chums were ghastly: shallow, spoiled, vain, casually misogynistic. But couldn’t Pope have drawn this ghastliness with an HB pencil rather than a magic marker? 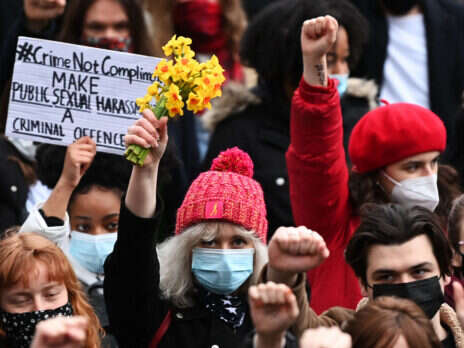 What woman would be saved by the Home Office’s new Safer Streets-funded apps?

Several of the lines that Lucan (Rory Kinnear with one of Nigella Lawson’s eyebrows on his upper lip) was forced to splutter in the first episode were laugh-out-loud clichéd. It isn’t enough to throw in the odd “old thing” here and there, and then to sit back and assume that all the oiks at home will simply lap it up. They won’t. Yes, it’s well known that Lucan’s close friend, John “Aspers” Aspinall (Christopher Eccleston) – who ran the Clermont Club, where the murderous earl gambled away his fortune – kept a private zoo at home and was much concerned with the primacy of the male in the wild. But Pope barely let him open his mouth without making reference to the behaviour of primates, breeding and bloodstock. Meanwhile, the moronic Lucan sucked it up. He was Tarzan and Veronica was Jane, and Tarzan had to win. Was this really how his mind worked? I doubt it. However thick, I expect his mental processes were a lot more complicated than this.

Still, I might just about have bought it had Aspinall been played convincingly. Eccleston, though, is dementedly miscast, with the result that he has turned in a catastrophically bad performance – one of the worst I’ve ever seen. He simply can’t do posh. He has no charm and no insouciance. His voice sounds forced, every “h” a crazy fart of determination, every long vowel a constipated groan. So hard is he concentrating on his enunciation that he seems unable even to move freely – unless, of course, the stiffness is part of his idea of posh.

Like all Lucan’s pals in this version of the tragedy, Aspinall is convinced that Veronica is “unhinged”. After all, aren’t all women unhinged? Again, I’m sure this was in the air. But it strikes me that the countess’s class might have played a part in their loathing, too – her stepfather, I gather, ran a hotel – and this is something that the drama chooses not to explore, perhaps because to do so would involve nuance. Far easier just to line up the sexist boors, not a cigarette paper between them, and present us with a cabal. The public loves a cabal, especially a posh one.

Veronica herself is well played by Catherine McCormack, an actor of whom we see far too little. Anxious, out of her depth, battling to keep custody of her children; she is like thousands of women before and after, the only difference being that she lives in Belgravia. I also relished Jane Lapotaire’s slyly nasty turn as Susie Maxwell-Scott, the late wife of another of Lucan’s pals and one of Pearson’s sources (the tale is framed by his journalistic researches, so we see her mostly in widowed old age). Maxwell-Scott is portrayed as a traitor to her sex, happy now as then to throw Veronica Lucan to the lions (I’m speaking metaphorically, but the big cats were always on standby down at Aspers’s place in the country; perhaps it was to their cages that Lucan was hoping to take the mailbag that contained Rivett’s body). Her first loyalty is to her class. The barbarians are at the gates – or at least, a journalist is.