When the Conservatives met in Manchester for their conference this year, one activist fondly recalled that 40 years ago the party held a majority on the city council. Today, it has no representation at all. The same is true in Liverpool, Newcastle and Sheffield. In these northern cities, as in Scotland, voting Tory has acquired a status similar to an eccentric pastime.

The party currently holds just 43 of the 158 parliamentary seats in the three northern English regions (see map below), fewer than the number it won in the Labour landslides of 1945 (44 seats) and 1966 (45 seats). At the 2010 general election, only 31 per cent of northerners voted Conservative, compared with 43 per cent of voters in the rest of England and 47 per cent in the south. Unless the Tories improve on this, they cannot hope to win the parliamentary majority that has eluded them for the past four elections. As things stand, 39 per cent of northerners say that they would “never vote” for the party. 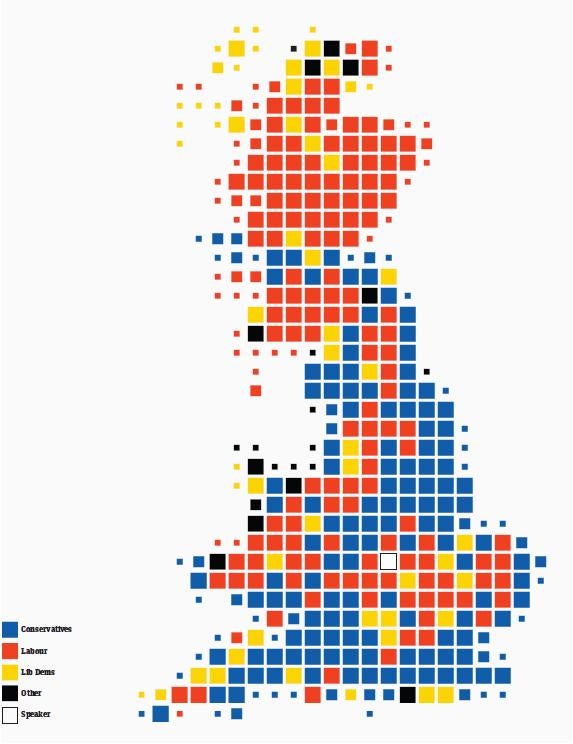 This chart, adjusted for population density, shows the parliamentary constituencies of the United Kingdom

America has learnt nothing from its million Covid deaths

Although the Tories’ “toxicity” is easy to identify, it is harder to explain. Contrary to popular belief, the party’s northern difficulty is not primarily because of differences in class and employment status. As polling by YouGov has shown, professionals and managers in the north are less likely to vote Conservative than unskilled workers in the south (33 per cent to 34 per cent). Some Tories attribute their weakness to the existence of Labour’s “client state” in the form of the north’s disproportionately large share of public-sector employment. (Government employees account for 20.3 per cent of all jobs in the north compared to 17 per cent elsewhere in England.) Yet public-sector workers in the south are more likely to vote Conservative than their private-sector counterparts in the north (33 per cent to 32 per cent). 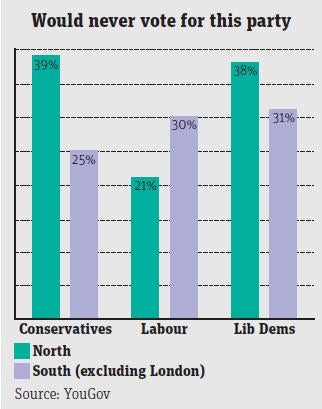 There is greater evidence for the importance of ideology. Northern voters are more supportive of higher taxes and higher state spending than their southern counterparts and less supportive of private-sector involvement in public services. But the differences are too marginal to account for the chasm in voting intentions. Rather, it is the Tories themselves who are the problem. If the Conservative brand is toxic in much of the United Kingdom, it is radioactive in the north. Nearly three-quarters of northerners (73 per cent) believe that the party cares “more about the rich and affluent than ordinary people”, compared with 62 per cent of southerners, and 42 per cent believe that David Cameron is “out of touch”, compared to 32 per cent in the south. Less damaging than the decision to cut the top rate of income tax was the perception that the Tories did so on behalf of their well-heeled friends in the south-east.

If northerners believe that the Tories regard the region as a foreign land and its people as oddities, it is often not hard to see why. In July, the Conservative peer Lord Howell touted the “desolate” north-east as an optimal location for fracking. On 20 November, in response to the finding that 39 per cent of northerners would “never vote” for the party, Margaret Thatcher’s former press secretary Bernard Ingham, a Yorkshireman no less, cursed their “bovine stupidity”.

There are Tories who have begun to think more imaginatively about how to revive their party’s fortunes. The campaign group Renewal, led by the northern Conservative activist David Skelton, has called for policies such as a higher minimum wage, a mass housebuilding programme and free party membership for trade unionists. Others have proposed the introduction of proportional representation for council elections to allow the party to regain a base in local government. Yet too many Tories still give the impression of wanting to dissolve the people and elect another. As long as they continue to regard northerners with a mixture of indifference and contempt, they should not be surprised when they respond in kind.