This book begins in motion, as if to dramatise the restlessness that characterises all of its main characters. Lord Byron, best-selling author of his age, is leaving England for exile, first in Switzerland, later in Italy. Percy Bysshe Shelley is leaving too, with his mistress, Mary Godwin, and her stepsister Claire Clairmont. We head with them, first of all, for the shores of Lake Geneva (where Frankenstein will be hatched) and eventually for Italy. Also in the company is the 20-year-old John Polidori, Byron’s personal physician, treated with varying degrees of scorn by his employer, who dubbed him “Pollydolly”. 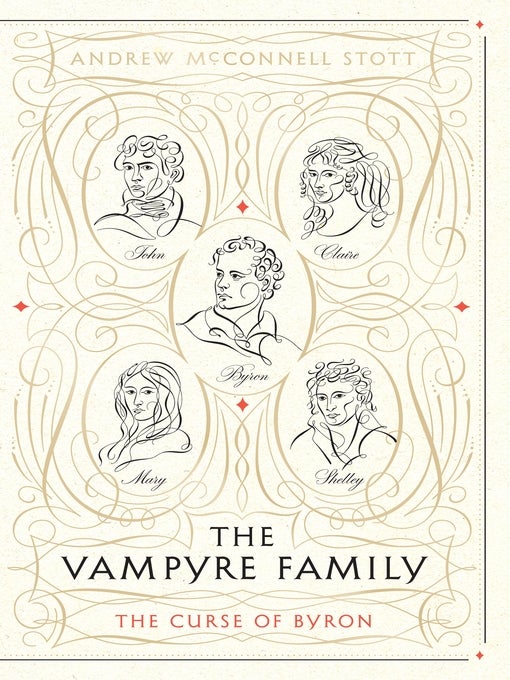 There have been thorough biographies of all the protagonists and most of their letters and journals have been published. What can be new? Only the narrative trick of seeing things from the camp follower’s point of view. As the relationship between Shelley and Godwin deepens, we are invited to feel Clairmont’s ennui as she has to sit and listen to them calling each other “Pecksie” and “Elfin Knight”.

When Polidori leaves the Villa Diodati and travels on foot across the Alps to Italy, we travel with him and are only allowed to meet Byron again when Polidori does. Stott writes with a brio and wit that make every page a pleasure, yet he has nothing new to tell us. The mysteries that previous biographers have failed to solve – notably whether there was a sexual relationship between Clairmont and Shelley – remain resistant.

His narrative logic makes the gravitational pull of Byron and Shelley seem mysterious. Some of their poetry is mentioned en passant but we are offered hardly any reason to share the powerful feelings of their admirers. It was Byron’s poetry, after all, that persuaded the teenage Clairmont that she had to give herself to him, body and soul. Here, Byron is impossibly conceited and selfish; Shelley is a dreamer with ideological fixations, who hardly notices the casualties around him. Arguably, while less vampiric than his lordly friend, Shelley made as many victims, including his rejected wife, Harriet, and Mary’s half-sister, Fanny, who both committed suicide within a month of each other in 1816.

Yet it is Byron who is to be the demon, his intimacy a “curse”. The book’s title recalls Byron’s own poetic self-image – rendered in darkly self-referential works like Cain or Manfred – as a fallen angel, destined to live beyond normal moral boundaries. The vampire metaphor was on everyone’s mind. Shelley’s deserted wife, Harriet, told a friend that the man she had once loved was dead and had become “a vampire”. Stott takes his title from a hostile article in Blackwood’s Magazine that ridiculed Polidori as a member of the “Vampyre family”.

Polidori himself achieved a posthumous place in literary history as the author of the first proper vampire novel. He returned to England determined to become a writer. He tried reviewing, play-writing and poetry. But he was knocked backwards in April 1819 when his story “The Vampyre”, inspired by those hours at Diodati, was published in a London magazine as “A Tale by Lord Byron”. Stott is convinced that the tale dramatises Byron’s influence on Polidori: it features a pale, alluring nobleman called Lord Ruthven (the name given to Byron in a roman à clef by his former lover Lady Caroline Lamb). He is an unkillable blood-sucker, whose hunting ground is London high society, and he especially likes to prey on women.

The protagonist of the story, Aubrey, is befriended by the vampire and feels loyal to him, even though he will be destroyed by this friendship. The story’s misattribution seems to have been the responsibility of the unscrupulous publisher Henry Colburn, who knew the selling power of Byron’s name. Soon “The Vampyre” was a hit on the London stage but Polidori got not a penny for it.

Overwhelmed by gambling losses and literary failure, he killed himself by drinking a solution of prussic acid. Soon afterwards, Claire Clairmont learned of the death of Allegra, her child by Byron, who had insisted on taking over her care. Immured in an Italian convent, from which Shelley declined to rescue her, the five-year old died of typhus. Clairmont lived on into her 80s, tormented by this loss. Her life after the early deaths of Shelley and Byron is compacted into an epilogue. After a peripatetic existence, often working as a governess, she was rescued when she eventually received money left to her by Shelley in his will and she lived out her days in Florence.

Stott reproduces the recollection she wrote shortly before her death: “Under the influence of free Love, Lord B— became a human tyger”. Stott agrees, adding the moral that proximity to fame brought only misery to Byron’s admirers. The lesson would please the many Regency moralists who inveighed against those satanic Romantics.

John Mullan is head of English at University College London and author of “What Matters in Jane Austen?” (Bloomsbury, £8.99)