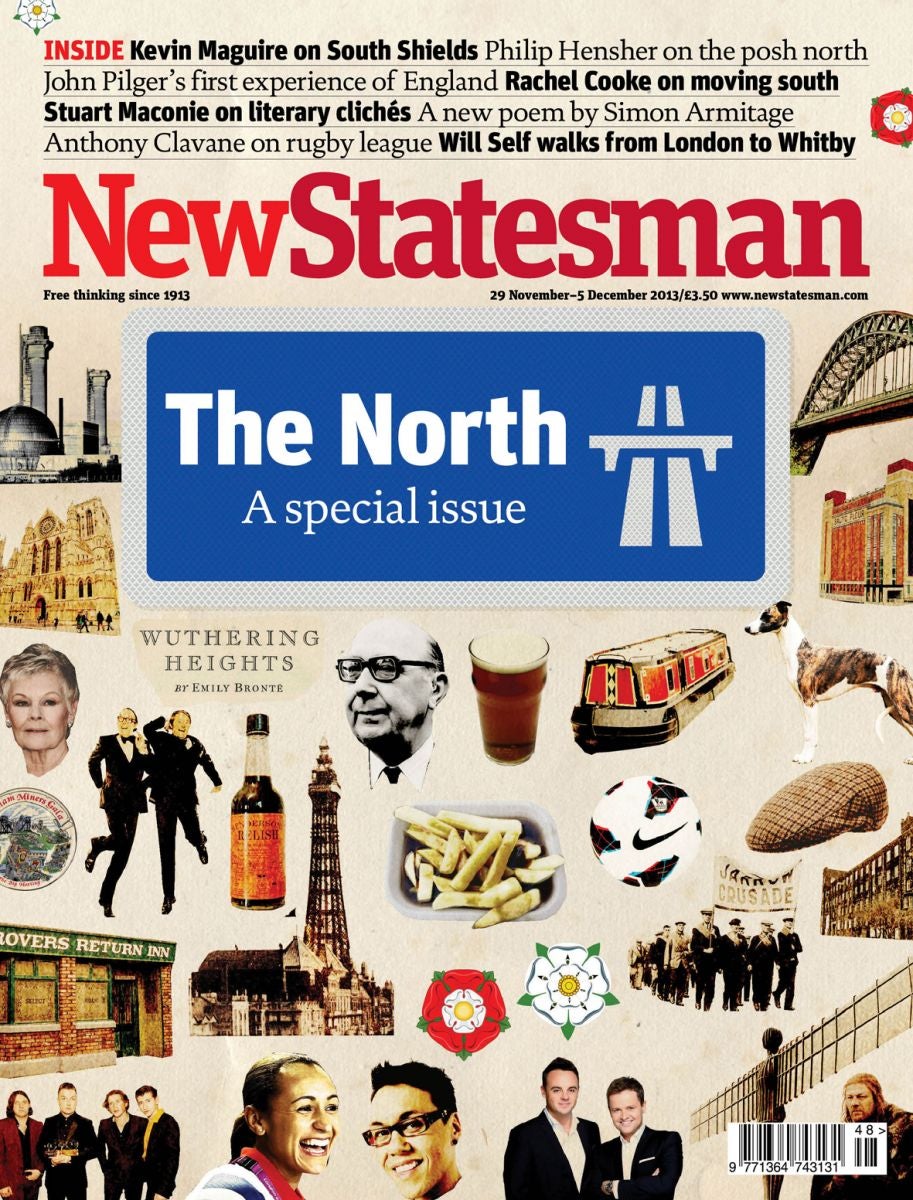 You are invited to read this free preview from this week’s New Statesman special on the north of England, out now. To purchase the full magazine – with our signature mix of opinion, longreads and arts coverage, plus Philip Hensher on the region’s bright cultural life, Anthony Clavane on the history of rugby leage, Will Self on walking from London to Whitby and a special Critics section on northern arts and literature, please visit our subscription page.

Inspired by the Kenyan author Binyavanga Wainaina’s celebrated essay “How to Write About Africa”, here is some guidance for those wishing to tackle the north of England.

First: don’t define your terms. The north is not so much a place as a national myth, so don’t confuse your reader with any specific or detailed references to, say, Merseyside or County Durham. The northerners won’t thank you for it anyway, being petty churls riven with factional differences and impacted grudges. Assume that everyone knows what and where the north is – don’t attempt anything as prosaic or useful as a definition.

Depending on the kind of piece you are trying to write, you will probably want to convey something of the following:

Re-Return to Road to Wigan Pier (Again) Revisited. Concerned liberal goes back “oop north” on any convenient Orwell anniversary to find they’re all still eating chips and dying of pneumonia.

It’s Flat White Skinny Latte Not Flat Caps Any More! Wide-eyed, well-meant “Did You Know They Have Wi-Fi and Sushi?” travel blog occasioned by Hull winning City of Culture 2017.

The Shame of My Dewsbury. Daily Telegraph piece by Today programme presenter who left in 1968 based on inaccurate rates of teenage pregnancy and an obese family he once saw on The Jeremy Kyle Show.

And so on. Try to evoke a vague, slightly chilly sense of up-thereness and isolation. Mention any traffic problems on your journey, failure of lineside equipment near Stockport or any particularly awful baguette you were offered on the train. After this, let your intentions be your guide. If your piece is generally favourable, mention any hills or cows you glimpse from first class and even risk a bit of poetry about pylons or cooling towers. If not, do note the first swear word you hear, particularly from a hoodie or a uniformed employee of any privatised industry.

Go big on phonetics, especially with regard to cursing. “Fook” and “bluddy” should be written as if in Middle English to better emphasise the mood of both the alien and the ancient. This is a primitive place, several centuries behind Islington, and a good writer will evoke this sense of primal darkness underlying the seemingly normal. Remember, it could all kick off in the north at any minute, even in Booths supermarket (their version of Waitrose). If no one actually says “Ee bah gum” or “Garlic bread?” or “Art tha oop for’t coop?”, try to engineer it. Offer money. It doesn’t matter that you’d never dream of reproducing a Bristolian or an Aussie or an Old Etonian phonetically. It is expected of the north. It makes them feel different. It makes them feel special.

What could be more northern than crime and violence? This should be reflected in your piece. Remember that different rules apply here and you must get the terminology right. Shoreditch is “edgy” whereas Longsight is “dangerous”. Bow is “real”, Whitehaven is “run-down”. Hackney is “gritty and bracing”, Rotherham is “bleak and menacing”. Other good words to drop are “blighted”, “desperate”, “red-brick”, “eyesore”, “hen party”, “fake tan”, and “Greggs”.

Food and shopping in the north is, as we all know, uniformly dreadful. However, if you are a London-based restaurant critic (is there any other kind?) it will behove you occasionally to placate your paper’s advertisers by leaving NW1 for the north. Hopefully this will be to somewhere civilised like the Inn at Whitewell or Sharrow Bay. But if, God forbid, it’s Carlisle or Leeds, be sure to let any minor discomfiture be reflected in your review. Patronise wearily. Imply that the sushi/ibérico ham/marrowbone granita is probably passable for Cumbria but would be a laughing stock in Hampstead. Mock the staff’s accents and the chef’s pretensions to metropolitan standards. Do include something disparaging about any difficulties you had parking the car or getting a taxi. The tone should be high-handed and sneering, but with a hint of noblesse oblige.

If your piece is more generally positive, you may want to include something about the region’s achievements. But remember to keep this largely to football, comedy and pop music. Display a familiarity with – but a patrician distance from – the works of the Stone Roses, Tony Wilson, Bez (he’s a funny one!) Arctic Monkeys, Jarvis Cocker, Oasis, the Verve, John Cooper Clarke and New Order.

If you can mention any of their football allegiances, all the better. Mention of Accrington Stanley usually gets a laugh.

Never forget that the north of England is essentially comic. You may be tempted to overlook this in favour of a nuanced account of how it was the Victorian industrial powerhouse that shaped the world’s economies and politics – but this would be a mistake. Rely instead on the more humorous tropes that have served other writers well. The people here are good-hearted but essentially simple, unless they are criminals or drug addicts (see all TV police procedurals) The men are blunt, half-witted and work-shy while the women are brassy, big-hearted, and of easy virtue. Mention “donkey-stoning” and “sparking clogs”. These are northern things apparently.

On no account waste your time dredging up any of the region’s political, scientific or cultural achievements; these are somewhat dull and worthy, and not exactly representative of the North as we like to think of it. Think Noel Gallagher, Gary Neville and Peter Kaye, not Alan Turing, Henry Moore, Rutherford splitting the Atom, the Pankhursts, Wordsworth, Engels or the Peterloo Massacre.

Illustrations? L S Lowry is perfect but avoid the weird Edvard Munch-esque ones, or the landscapes. Try to find one with downtrodden crowds, a mill chimney or a child with callipers. It shouldn’t be too hard. Photographs should have been taken no later than 1962, be in black and white and feature sooty-faced coal miners emerging from the pithead or urchins kicking a football in a back alley, not hi-tech office blocks or young women with iPhones drinking cocktails, however many you may encounter. Never use a picture of a northerner in a suit unless it is a TV comedian or a celebrity footballer appearing at his drink-driving hearing. If you can get a mangy dog, a rat-faced kid in a cheap tracksuit or an old dear with a tartan shopping trolley, so much the better.

Don’t go to Harrogate, Hebden Bridge, Durham, any part of the Northumberland Coast, the Lake District, the Eden Valley, Whitby, Robin Hood’s Bay or Hadrian’s Wall. This is not really “the north” as we all understand it and will only confuse your readers. Keep it urban, keep it polluted, keep it depressed. And don’t be afraid of any comeback from actual Northerners. You can always put this down to “chippiness”.