In its most recent issue, Vanity Fair published a piece by Maureen Orth on the Church of Scientology, which encompassed the relationship between its leader, David Miscavige, and its most famous adherent, Tom Cruise.

The magazine put 32 questions to the Church (and if you think that’s a lot, remember the New Yorker asked it 1,000 queries for its mega-long profile of Paul Haggis, “The Apostate”).

The questions elicited a furious response, delivered via Jeffrey K. Riffer, of the law firm Elkins Kalt Weintraub Reuben Gartside LLP. The Church has posted the missive on its media response site [PDF].

It is quite unlike any lawyer’s letter I have ever seen before. Here are some extracts: 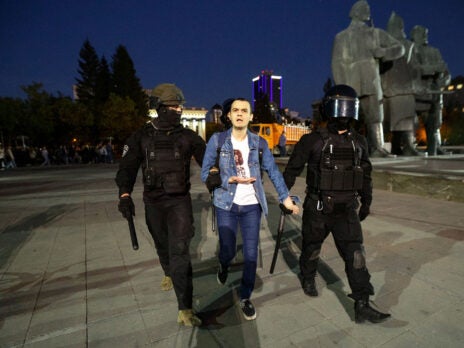 We are writing regarding your, your editor’s and reporter’s shoddy journalism, religious bigotry and potential legal liability arising out of Vanity Fair’s upcoming story about the Tom Cruise divorce. Significantly, while Maureen Orth was preparing her story, Vanity Fair ignored its staff and contributors who have firsthand knowledge of Mr. Cruise and of Mr. Miscavige and who would burden her story with the truth.

… Her request for an “interview” of Mr. Miscavige was a disingenuous sham, since she couldn’t possibly have thought that an “Oh, by the way” phone call to the Church’s Public Affairs office requesting an interview with the ecclesiastical leader of the religion could possibly be accommodated. If she were serious, she would have done at least a molecule of research in seeing that Mr. Miscavige travels across the country and around the world almost non-stop, unlike the anti-Scientologist apostate sources who form the basis of her already-written story and who are available on a moment’s notice at the press of “send” on any anti-Scientology hate-site blog. Is it usual for you to take over the editorial direction of Vanity Fair articles or is that reserved for hatchet-jobs of minority religions and its members?

Jeffrey K. Riffer did not like the thrust of the story:

Vanity Fair, which once had a reputation for journalistic integrity, is now reduced to asking the leader of a religion in its 32nd, and final question: “Would David Miscavige comment on the notion that he has been a kind of third wheel in Tom Cruise’s relationships and marriages?” Mr. Miscavige is the ecclesiastical leader of a worldwide religion; a man of impeccable character who is dedicated to his faith and to the service of its parishioners. He respects the institution of marriage and those who enter into it.

Jeffrey K. Riffer does not like people denigrating David Miscavige’s achievements, which are monumental:

Mr. Miscavige is the leader of a dynamic global religion expanding across five continents. His duties are herculean and accomplishments monumental. He is not a “third wheel” to anything or anyone. Ms. Orth is apparently willing to besmirch Mr. Miscavige’s reputation based on unreliable sources to sell magazines, while ignoring the decades of his tireless service to advance the Scientology religion as well as its international humanitarian programs for all mankind, while also ignoring reliable sources available at her discretion, e.g., Vanity Fair employees who know Mr. Miscavige personally, including a Vanity Fair employee who works for Mr. Miscavige in a professional capacity.

Jeffrey K. Riffer thinks that the story amounts to bigotry:

Ms. Orth appears to have only gleaned her information from fringe hate sites and their webmasters. If she were writing a story about a Sikh religious leader, would she first latch onto the sites of white supremacists, then interview their most virulent and violent members and follow it up with mere “fact check” questions to the Sikhs themselves? At the eleventh hour? And refuse to give the names of her white supremacist sources?

The scenario is no different here. Scientology is a new religion and its beliefs not as well known as those of more ancient history. That does not excuse you or Ms. Orth for being ignorant. Rather, it demands you be even more sensitive to finding out what the true beliefs are of Scientology-which can only be told by the religion itself. Just because you don’t think you are bigoted doesn’t mean you aren’t. Bigotry and ignorance go hand in hand and you are definitely and wilfully ignorant of the actual beliefs of Scientology and the activities of its Churches.

Mr. Miscavige has never had any involvement with the hiring of Mr. Cruise’s professional staff or press agents, certainly has never spoken to Mr. Cruise’s sister about them and allegations of joking around about Mr. Cruise’s romantic relations are manifestly false since it is inconceivable (to the entire world) that Mr. Cruise would have difficulty getting a girlfriend. This goes beyond not wanting to dignify a question with a response, but goes to the credibility and ethics of your journalist.

If Vanity Fair goes forward with publication of such defamatory allegations, now that it is on notice that the story is false, the stain on its reputation will last long after any reader even remembers the article. The sting of the jury verdict will last longer still; far longer than any pleasure from racing to publish a poorly researched and sourced story.

You can read the full letter here. Hat-tip to Hadley Freeman.