Over the weekend, which fell during the Jewish festival of Pesach, or Passover, an Instagram account with the handle “hitlervideos” began serially following Jewish people on the picture-posting app. According to the users who were followed, the account shared anti-Semitic images. These went beyond simply posting historical quotes and speeches from Adolf Hitler, offensive though these would be to many. The posts, according to the complainants, included Holocaust denial quotes, posts heralding people who killed Jews, and “jokes” about murdering Jewish people in Israel. The account was swiftly reported for “hate speech and symbols” by more than 10 people, based on the number of screenshots posted on social media, but each person was met with the same reply from Instagram: The account, in fact, did not go against community guidelines.

Both Facebook and Twitter have had their own public trials over anti-Semitism. Following the 2016 US presidential election, Twitter became infamous as a favourite haven of neo-Nazis and anti-Semites who took advantage of its lax regulation of hate speech. Following this backlash, it announced initiatives to begin addressing the problem at the end of 2017. In the same period, Facebook has become synonymous with the tired buzzword “fake news”, because of the ease with which users could spread misinformation, including anti-Semitic conspiracy theories. Following revelations over Cambridge Analytica’s use of Facebook data, the company too is admitting it made mistakes and is attempting to tweak its algorithms to screen out fake news. In Britain, the Facebook data controversy has collided with another, Facebook-related one: the extent to which the Labour party has ignored anti-Semitism.

In and among all this talk of social media’s role in propagating hate speech, one platform has barely been mentioned: the photo-sharing, Facebook-owned app Instagram. The app is often characterised as being a lighter, less vicious platform than its wordier social media counterparts, largely full of wholesome images and a focus away from debate and conversation. Instagram may have received heavy flack for the way it deals with body issues and eating disorders, but little has been mentioned, or even noticed, about the way it deals with racist content posted on its site. Indeed, since Instagram is known mainly for beautiful pictures, most users don’t expect to find far-right content claiming the Holocaust didn’t happen.

A little digging, though, reveals that Instagram too has a wider anti-Semitism problem. While searches for common racial slurs largely result in freshly deleted accounts and posts, search results for anti-Semitic tags showed a mountain of hate speech. Although many of these anti-Semitic accounts may not have huge followings, hashtags like #hitlerdidnothingwrong yielded 200,000 tagged posts. Hashtags with similar sentiments, such as #holocaustwasalie, drew somewhat smaller numbers, but the results were still significant. The posts with these tags echoed what was reported to have been posted on the “hitlervideos” account, as they shared cartoons, memes, and videos that ranged from general hate speech to as severe as promoting violence. When related hashtags appeared underneath these anti-Semitic ones, suggestions included tags such as #racistmemes. 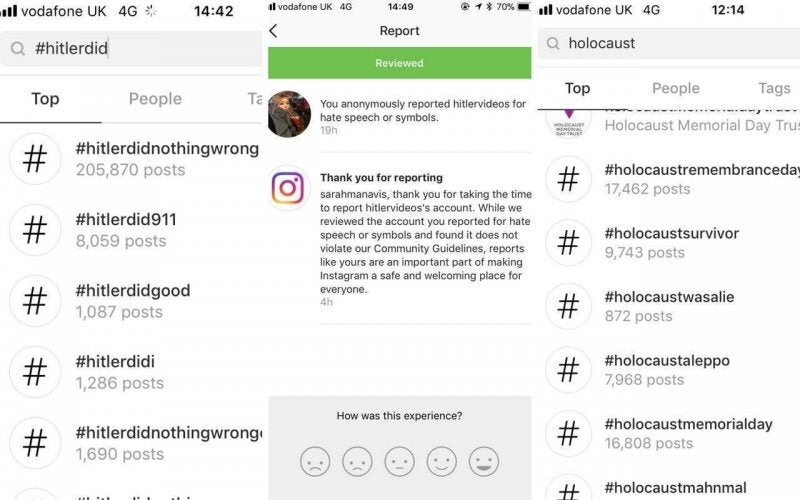 One person followed by the “hitlervideos” account was Chloe Sobel, a Jewish Instagram user who was notified of her new follower on her way home from visiting her grandmother for Pesach. Sobel criticised Instagram’s review process, pointing out that there was little way to explain what she was reporting beyond a few pre-defined complaints.

“There was no way to actually express [that anti-Semitism was the issue] when reporting the account,” she explained. “If someone’s just glancing at it to see if there are literal swastikas, they won’t see that. I don’t know what Instagram’s review process is — it was very quick, so I wonder how thorough it was.”

Sobel points to her personal Instagram, where she had posted a screenshot of the response she received following her report. She notes that the turnaround time was under an hour, a response time mirrored in other screenshotted reports posted on social media. One post showed that Instagram responded in a matter of minutes. While on the face of it, a quick response time might seem good, many forms of racism online play on subtle references, dog whistles and conspiracy theories that might seem obscure at first glance. This speedy response is in contrast to other social media platforms, like Twitter and Facebook, that often take days to comb through the content on reported accounts.

When asked for comment about their review process for hate speech on their app, an Instagram spokesperson said: “There is no place for anti-Semitism on Instagram and hate speech of any kind will be removed when it is reported. This account has been removed for violating our community guidelines. Some people who reported it, wrongly received a message stating that the content didn’t violate our community guidelines and we are sorry for this.”

Despite the reports of hate speech on “hitlervideos” being initally rejected by Instagram, the account has since disappeared. However, in its place accounts of a similar name have popped up: “Hitlervideo” and “hitlervideot”, what appear to be English and Turkish versions of the original account, surfaced on Tuesday morning.

Regardless of what is posted from either of these accounts, or what was posted by their predecessor, they are merely drops in the ocean of Instagram’s larger anti-Semitism problem. Although the platform has done some work in removing its racist content, with posts tagged with slurs being removed relatively quickly and a 24/7 team dealing with reported content, anti-Semitism appears to slip under the radar. While other social media platforms have already had their public reckonings over their users’ hate speech against Jews, Instagram’s may be yet to come unless it does more to address it.