Last Boxing Day, Amelia Womack’s 11-year-old nephew made a passing comment that would ultimately see 20,000 people brand his aunt a liar. Womack, who is deputy leader of the Green Party, was relaxing at home with her nephews, trying to choose a film to watch after spending the day playing games. “We were going through what we could watch and we had a film called The Spy Next Door,” she says. When neither of her nephews was interested, she compared the film to James Bond in order to pique their interest.

“Oh, I don’t really like James Bond,” her nephew replied. Why? Womack asked. Her nephew told her that he’d recently seen the cover of a James Bond book featuring a semi-naked woman. “The reasons that it made him uncomfortable might have been many different reasons,” says Womack now, “but the reason he gave at the time was: ‘Why do naked women have to be there to sell books?’”.

Later that evening, Womack tweeted about the conversation with her nephew, ending her retelling with a hashtag: #ProudAuntieMoment.

The post was shared over 400 times and liked another 4,000. On Sunday evening, nearly three weeks after it was first posted, the tweet saw Womack crowned winner of the Didn’t Happen of the Year Awards, 2017. The accolade – which remained on to her Wikipedia page for a day before moderators deleted it – posits that Womack is a liar; that her nephew said no such thing; that she made up the tweet.

“I’m still just baffled that people can make assumptions about something they weren’t at… based on their own assumptions of what 11 year olds are like,” says Womack, who says the initial response to the tweet “drained” her Christmas. “And I was celebrating my birthday when the [Didn’t Happen] award came out; people were directly attacking me around my birthday.” Womack also says people sent abuse to those who wished her happy birthday on the site.

“It was just mind-boggling.”

Nothing ever happens on the internet. When someone tells a story online – of a text they received, of a conversation they overheard, of 50 cows that broke into their back garden – someone else will inevitably be ready with a two-word reply. “Didn’t happen,” they’ll type, or those who can’t be bothered to type can choose from an array of ready-made sceptical memes. There’s a box labelled “Things That Never Happened”; a Venn diagram of separate circles reading “Things that happened” and “This”; and a mock-up of betting odds reading “Didn’t Happen @ 1/1000”. 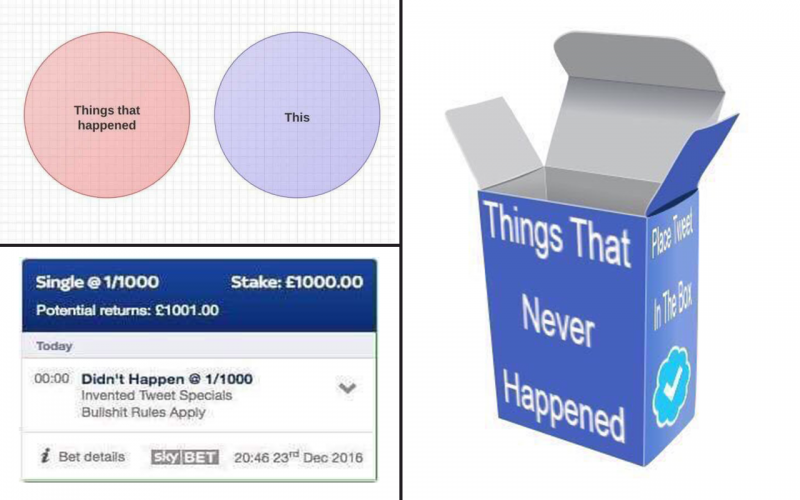 Every year, once a year, these internet sceptics hold a ceremony. For the last two years, the “Didn’t Happen of the Year Awards” (DHOTYA) has showcased an array of seemingly-made up tweets to 20,000 followers, with over 100,000 votes cast last weekend in order to crown 2017’s winner.

“I see it as a bit of fun,” says Harry, the 22-year-old from Coventry who runs the awards over Twitter (he didn’t wish to disclose his surname). “It’s a bit of a laugh, it doesn’t have an additional agenda – but sometimes it’s nice just to call people out on their lies.”

Womack has a different perspective. It’s hard for her to separate the awards from the initial response to her tweet, which saw multiple people using homophobic slurs such as “poofter”, “bent”, and “balloon knot basher” against her nephew. A day after she sent the tweet, boxer Paul Smith Jr. gained nearly 5,000 retweets and over 19,000 likes for branding her story “bollocks” and calling her a “dramatic feminist auntie” on the site.

“I was quite proud of the fact that nobody has gone out and targeted the nephew, nobody’s brought the kid into it, everyone’s just speaking about Amelia and whether the tweet is true,” says Harry of his followers. While Womack acknowledges this is mostly true of DHOTYA’s followers, she was troubled when some Photoshopped pictures of her, with some people superimposing her face onto nude women.

Beyond this, she also feared that the publicity from DHOTYA could “enable” others to attack her nephew again. “I don’t mind stuff directed to me as much, but then having stuff directed at my nephew was really hard.

“I almost feel like people don’t realise, don’t really comprehend, that it’s a real person at the other side.”

For as long as the internet has existed, people have used it to lie. In a 2014 VICE article entitled “The Sad World of Adults Pretending to Be Kids for Retweets”, journalist Clive Martin documents a persistent type of online lie – when adults make up sentimental, political, or insightful comments and claim their children said them. While it is undeniable that many on Twitter do lie like this, Womack maintains she isn’t one of these people.

“I just find it baffling that people can take what happened in the comfort of your own home and call you a liar, just because they can’t comprehend that somebody younger than them is thinking about the world in the different way,” she says, explaining that her nephew reads The Week Junior and occasionally attends political events that she speaks at. “Just because you might not know an 11 year old that would think in that way doesn’t mean it didn’t happen.”

For what it’s worth, Harry wouldn’t have chosen Womack as a winner. His favourite “Didn’t Happen” tweet was sent by Paul Dickov, a former footballer, on New Year’s Day 2017. Dickov claimed that “2 lads” had tried to mug him as he was walking home from the shops but – he embellished with a cry-laughing emoji, followed by one of a fist – he “put them in their place”.

“With Amelia’s I don’t doubt that some kind of conversation happened with her nephew,” says Harry, “but I can’t imagine it being so…” He trails off and explains. “There’s an agenda there she was trying to push, he’s probably made a comment in my opinion like ‘Why’s there a half-naked lady there?’, or whatever, I don’t think it was quite how she put it out there.”

The Didn’t Happen of the Year Awards aren’t wholly about what did and didn’t happen. (If they were, this year’s winner would surely be @theYNnels, who tweeted: “I saw a 16yrs old boy went up to a bar & drank 4 bottles of Guinness. He got up to leave & the barman asked him to pay. He bought out his birth certificate & replied; Not for sale to persons below 18 years”). The DHOTYA are also about, in the tweeted words of its most ardent followers – 93 per cent of whom are male – “how pathetic the intent of the lie is”, “the agenda pushing”, and “the pure effort someone has gone to”.

“We did a quick analysis of who was replying and it’s mostly young white men… only two women commented,” says Womack of her abusers, while Harry explains that the DHOTYA page was originally popular with football fans, and therefore is aligned with “stereotypical lad culture”. Yet far from misogynistic motivations, Harry believes Womack won because during the awards she reiterated that her original tweet was true, drawing further attention to it. He also thinks the hashtag #ProudAuntieMoment gave people something easy to parody.

“The most abuse that I get on Twitter is when I talk about women’s rights, and it’s just not a coincidence that that was about feminism and women,” says Womack.

When I reach out to some semi-finalists of the DHOTYA 2017, many are immediately keen to talk. Yet when I ask more questions – can I speak to the person who received these texts from you? Are you free to chat on the phone? – some went silent. This reluctance to explain their side of the story reinforces the idea that many of these tweets are just that – stories – and proves that the Didn’t Happen of the Year Awards do go some way in calling out genuine internet liars. But is this even necessary?

“There seems to be, especially with the way Donald Trump has brought in the whole fake news, it seems to be really popular for people to call stuff out,” says Harry, who paid “below £500” to acquire the Didn’t Happen of the Year Twitter account from its original creator. For Harry, however, the page is less about calling people out, and more about building an “online community”.

“If people were to overstep the mark then it would be something I would call out because the idea of the page isn’t to give abuse to people, it’s not a trolling page,” he says, explaining it’s all about “banter” and “good fun”. He also says that he is cautious about trolls, and even drew attention away from one of the DHOTYA finalists after he set his Twitter page to private during the awards. “I wanted to try and deviate away from him as much as possible, because having looked through his profile he seems to do a lot for mental health, and I didn’t want to the page to target him, because he handled it in a different way to how other finalists handled it,” he explains.

“Amelia Womack has blocked us and I’m sure she’s woke up this morning to a lot of notifications, potentially unwanted notifications, but you know it’s all in good humour.”

Yet just because Womack didn’t publicly tweet about being affected didn’t mean she wasn’t. “I’m still baffled that people would focus on something when it included a child and it incited homophobia and abuse towards that child,” she says. “Over time I’ve got a thicker skin but then people who commented supporting me were getting abuse directed against them.”

Womack later argues that this behaviour should not be excused as “banter”.

“Let’s be clear what we are talking about. What has been aimed at me over Twitter in the past 48 hours, and what faces women politicians on social media every day, is not banter. It is abuse. It is vile, often violent, and is having very real, damaging effects on people’s lives and mental health. Branding trolling as ‘banter’ or ‘just a joke’ attempts to excuse abuse. It is irresponsible and it is time it stopped.”

On the phone, both Harry and Womack are remarkably pleasant people. Perhaps, you could argue, both were simply trying to have some fun online that spiralled out of their own control. The existence of the awards could be taken as a positive sign that people are getting more sceptical online in the wake of fake news.

“People are going to have to start getting evidence of things,” says Harry. “If they want to make claims on the internet, there has to be evidence… If things happen, you want proof, and I think that’s what this page is starting to drive.”

Yet the fact that an incredibly plausible story could be crowned the least plausible story of the year speaks to a greater political environment, in which online trolls stop at nothing to disparage and discredit feminists. The fact that others, who claim not to have misogynistic motivations, could freely mock Womack also speaks to an online culture in which we care little about the impact of our words.

“People think it’s not real, people were even saying that my nephew isn’t real,” says Womack, “I think that enabled that kind of homophobia and abuse.”