Former Big Brother contestant Rebekah Shelton has been subject to a Twitter death hoax which saw publications such as Mail Online, Metro, The Sun, Evening Standard, and BBC Newsbeat reporting that the 32-year-old star had died. A single tweet sent from her verified account prompted the reports, with seemingly no publication attempting to corroborate the news.

BBC Newsbeat appear to have taken down its story, and the article will no longer load. 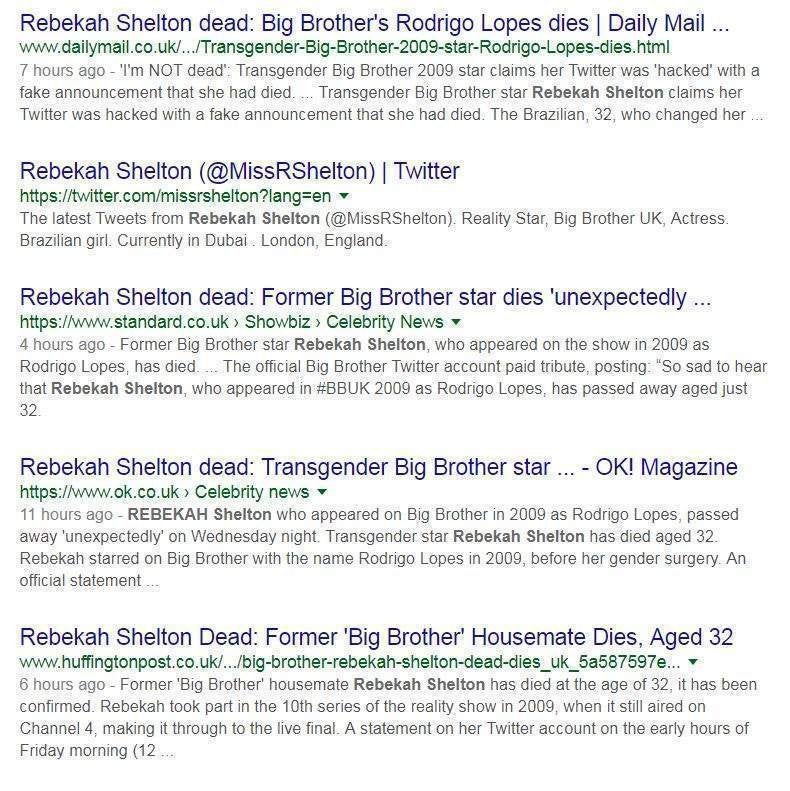 “Please stop spreading this news!!!!!” Rebekah pleaded online. The original tweet which prompted the news was posted to her account by an unknown hacker, and read: “We’re sorry to inform everyone of the sad news that our wonderful and lovely Rebekah died unexpectedly on Wednesday night. We ask that you respect the family’s privacy at this time.” Many of Rebekah’s former Big Brother housemates expressed their condolences online, with author Gerry Stergiopoulos‏ writing: “Hope I will wake up soon and this was all just a bad dream.”

I’m not dead!!!!!! Please stop spreading this news!!!!! My lawyer is already working on this and this person who wants to spoil my happiness is going to pay for it!!!!! pic.twitter.com/6PEzjjEGye

In her video, Rebekah says she has “been through hell” because of the experience, which was clearly exacerbated by the publication of the hoax in the mainstream media. While tweets have frequently set the news agenda since the 45th president of the United States started using his Twitter account to announce policy changes and threaten nuclear war, the use of a singular tweet as evidence in this instance is troubling. Before the hoax tweet was posted, Rebekah hadn’t tweeted since 2015, so news organisations should instinctually have questioned who had control of the account.

Rebekah now joins the ranks of Home Alone’s Macaulay Culkin and Get Your Own Back’s Dave Benson Phillips in being subject to an online death hoax. Phillips claimed that because he didn’t have Twitter in 2009 when the hoax was first spread, he was unable to sufficiently convince people he was alive. “Acquaintances just read it and went, ‘Oh. That’s a bit of a shame. We were just about to do something with him. We’ll just move on,’” Phillips told VICE.

Offline, the celebrity death hoax isn’t new – with the “Paul is dead” rumour in the 1960s speculating that Paul McCartney had died and been replaced with a lookalike. Yet the internet makes it exceptionally easy for these rumours to spread, and it is understandable that social media users, struck by grief, share them. What is less comprehensible is that reputable publications now thoughtlessly turn rumours into news.

The twice-stolen identity of Taiwan Jones: why people lie on the internet