We are nearly as certain as it is scientifically possible to be that there isn’t any life on Mars. There is still every chance that there was life at some point, and we might still find it. The landscape is clearly marked with signs of water erosions, and Curiosity and Opportunity (the two rovers currently trundling around up there) have taught us a huge deal about its geology – including the discovery of “abundant” traces of water in Martian soil. Mars clearly had a lot of liquid water on its surface at some point.

The question, though, is why it doesn’t have lakes, rivers, oceans, and streams any more – and what it looked like when it did. Nasa’s Goddard Space Flight Center has taken a stab at visualising the Martian world of 3.7 billion years ago ahead of its Mars Atmosphere and Volatile Evolution (or Maven) mission which takes off on 18 November, producing a quite lovely animation:

It looks just like Earth because back then Mars had two Earth-like things going for it that it doesn’t any more. Firstly, the habitable zone around the younger, larger Sun – that’s the range of orbits around any star within which is neither too hot nor too cold for a planet to have liquid water on its surface – was further out, and secondly Mars also had a thick atmosphere. Without the pressure that comes with an atmosphere, liquid water will either freeze solid or evaporate instantly, as happens currently on Mars.

The habitable zone moving inwards had the happy side effect of making the Earth habitable, and eventually – as the Sun enters its final few billion years and swells in size, becoming a red giant – that zone may well move out further again and give Mars a chance at hosting liquid water again. That is, if it gets an atmosphere too, and that’s the mystery. We know it must have been there once, but it isn’t there now, and we can’t be sure why that it. We’re not even totally sure if the atmosphere’s disappearance is wholly responsible for the transformation of Mars from wet, blue globe like you see above to dusty, red ball that looks like this: 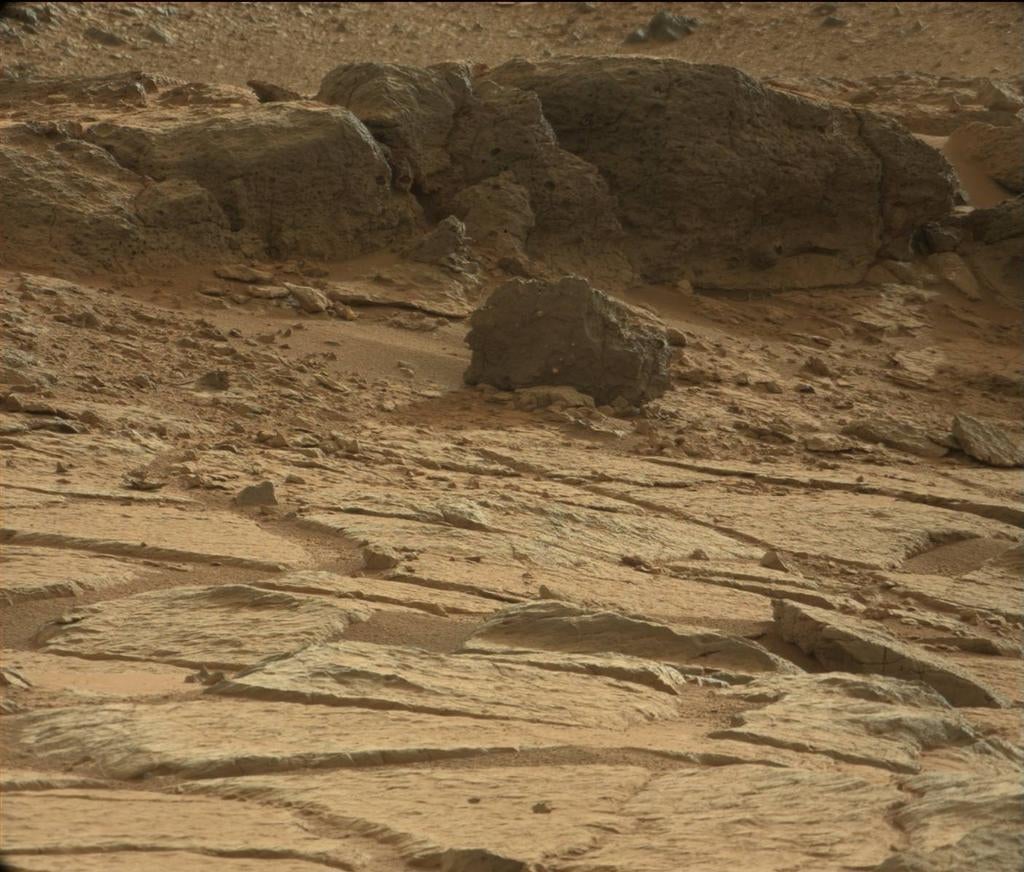 That’s a picture taken by the Curiosity rover.
Credit: NASA/JPL-Caltech/MSSS

One possibility for what happened to the atmosphere is that Mars’ core cooled down and stopped generating both plate tectonics and a magnetic field, which would have formed a barrier that would have stopped too many atmospheric particles being stripped away into space by the solar wind. Without active volcanoes to generate gases to replace the lost particles, you end up with the situation today where the surface pressure on Mars is, on average, 0.6 percent that of what you’ll find on Earth. That’s equivalent to being 35km up in the sky on Earth, nearly twice as high as where commercial aeroliners fly.

Maven is an orbiting probe that will launch on 18 November and try to uncover more data about Mars’ atmospheric past. Here’s Joseph Grebowsky, the mission’s project scientist:

Studies of the remnant magnetic field distributions measured by Nasa’s Mars Global Surveyor mission set the disappearance of the planet’s convection-produced global magnetic field at about 3.7 billion years ago, leaving the Red Planet vulnerable to the solar wind.

Maven has been designed to measure the escape rates for all the applicable processes and will be able to single out the most prominent. Previous remote Mars observations from orbiting spacecraft have observed the geological features that have been used to estimate the amount of water that did exist and have analysed the global distribution of water ice and surface chemistry to infer that water was lost through time. Mars Curiosity rover has the ability to analyse the chemical composition of the solid surface, which contains information of the atmospheric composition during the formation of the planet, in particular the isotope ratios, the lower atmosphere composition, and the current gas exchange with surface reservoirs. MAVEN is going to measure the current rates of loss to space and the controlling processes. Given the lower-atmosphere information and the nature of the escaping processes, one can extrapolate from current conditions into the climate of the past.

The probe will reach Mars in September 2014, and is scheduled to work for one Earth year on its mission of uncovering more Martian secrets.