The Science Museum’s new exhibit on the Large Hadron Collider (called Collider) opens tomorrow, and though it may have captured the public’s attention with the search for the Higgs Boson – or “God particle” – it was Peter Higgs himself who spoke this morning and insisted that he isn’t the only one who deserves credit for predicting its existence. It was fitting, as Collider emphasises that the process of proofing Higgs’ theory involved thousands of thinkers, each with their part to play.

Higgs first theorised about his boson in 1964, but at the Science Museum today – in a tiny recreation of the much-larger-in-real-life lecture theatre at Cern – he pointed out that, actually, there were six people writing about the same theory in 1964.

He said: “There were three groups – Robert Brout and François Englert in Brussels, myself in Edinburgh, and Tom Kibble, Gerry Guralnik, and Carl Hagen at Imperial College. The two in Brussels were by a long way the first – they were ahead of me. I was second to be published, my approach was seen as complementary to theirs. The other three at Imperial College lagged behind in publication, the consequence was they got less of the credit.”

Brout died in 2011, and the Nobel Committee, in Higgs’ words, decided to “award the prize to the surviving two of the first three”. However, Higgs argued that they should have included Kibble – who is still working at Imperial College London – as a prizewinner. “What he wrote in 1967 was the kind of bridge from my very simple model of 1964, and I think his work is important and I think it’s a shame he’s been missed out.”

The Nobel Prize’s historic function – as a reward for acts of individual genius – increasingly looks incapable of recognising that, these days, science often requires collaborations between hundreds or thousands of people around the world. The Collider exhibition celebrates this, and the scientists, technicians, and engineers that operate the LHC. If you can’t get to Switzerland to see the LHC, Collider will most likely be the next best thing.

Ian Blatchford, the Science Museum’s director, was bullish this morning in declaring that “in London this week, you can see pearls at the V&A, gold at the British Museum, Paul Klee at the Tate, and you can see Collider here – and forgive my arrogance, but I think of those four, the most pioneering and ambitious [exhibition] is here”. It is, he said, “a special exhibition, with real, meaty science, and real objects”, and he’s not lying. 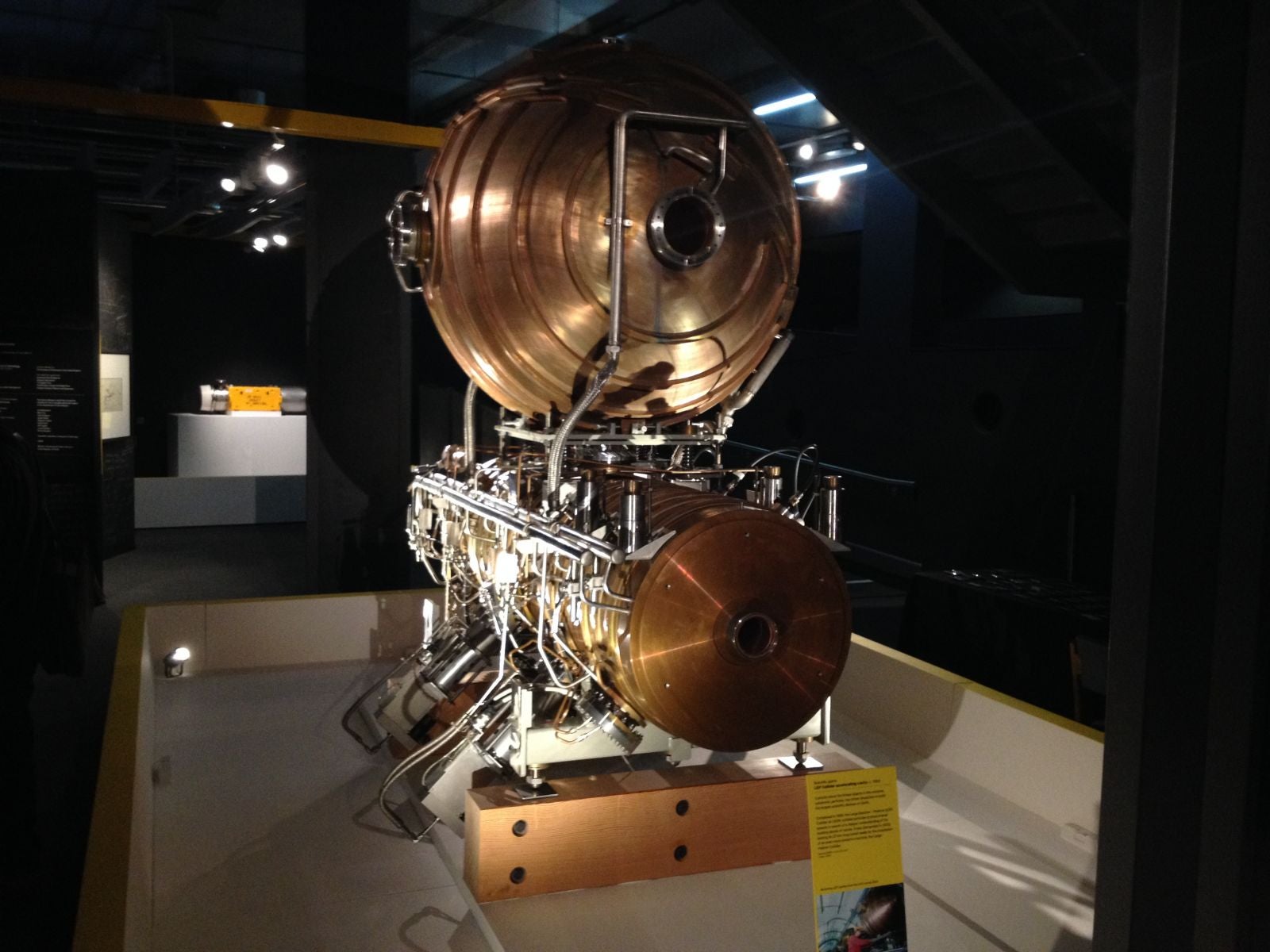 Above is part of what used to be Cern’s Large Electron-Positron Collider, which was decommissioned in 2000. Collider is full of objects from Cern’s history like this, as well as its present – everything from cross-sections of powerful magnets and tunnels to replicas of the banal workstations and concrete corridors that make up so much of the LHC complex. There’s even the bottle of champagne that Higgs bought on the day he heard that the LHC had confirmed the existence of the Higgs Boson.

Since this is about the people of the LHC as much as the science, there are exhibits that mimic offices – the only bit that doesn’t feel just like the real Cern, according to its director-general, Rolf-Dieter Heuer, because they had to be made bigger so visitors could fit inside – with video projections everywhere. Some show

Here’s one that breaks down the Standard Model of fundamental physics, and tries to explain the LHC’s next target of investigation – dark matter:

It’s impressive that everything is both visually striking (pretty, even) and yet informative, and the Science Museum should be very pleased with Collider. Particle physics isn’t an easy subject to explain, but, as Heuer argued today, scientists have perhaps made a mistake assuming people wouldn’t be interested in complicated science.

He said: “You have to imagine, these experiments are global endeavours, so one of the big experiments consists of more than 3,000 scientists and engineers. Now, 3,000 scientists from around 200 institutions around the world, you have 200, 300 professors. That means you have 200, 300 egos. You have to direct those egos so they converge. But it’s easy to converge them, because they all have one thing in mind – they want to gain knowledge about the microcosm, about the early universe, how everything began and how everything developed.”

“It fascinates everybody – everybody wants, consciously or unconsciously, to know how everything started, and it goes far beyond the discovery of the Higgs boson.”

Now listen to Ian discussing the exhibition on the NS Podcast:

listen to ‘The New Statesman Podcast: Episode Twenty-Six’ on Audioboo