Note from Helen: Cath Elliott’s Blog, An Occupational Hazard, was one of the pieces which inspired me to collect together the experiences of female bloggers about online abuse. I thought Cath was incredibly brave to write about the hatred she was subjected to – particularly since it was deliberately as humiliating and obscene as possible.

Funnily enough, her internet tormentors were from a site called Don’t Start Me Off! – which was taken offline last week by its owner after the unwelcome glare of publicity fell on it when Mary Beard spoke out about the thread about her posted there. As Richard White, the site’s owner, is now claiming that he has been badly misrepresented, I thought it was important to hear what it was really like to be harassed by DSMO. Here’s Cath, in a post originally published on her blog yesterday.

Richard White, the former site owner and moderator of the now infamous Don’t Start Me Off! claimed in Friday’s Guardian that “we never try to hurt people’s feelings.”

In his sniveling non-apology to Professor Mary Beard, who has recently been the victim of the DSMO hate mongers, White also stated: “We do not go out to be offensive”. He then implied that the only reason Beard had seen the vile comments about her was because she’d obviously gone on to the Internet specifically to look for them.

According to White, the trolls at DSMO were never actually trolls in the true Internety sense of the word because they never went after anyone off the site. They didn’t for instance harass anyone on Twitter or Facebook; they all stayed safely within the confines of the DSMO comment threads.

Well, as I’m sure you’ll understand when you see the nearly two years worth of abuse and harassment I’m about to detail here, I read that Guardian interview with White with a mounting sense of disbelief.

In the piece I posted back in April 2011 – An Occupational Hazard? – in which I detailed the abuse I’d received on that site, I said: “Of course I realise that by posting this piece I’m no doubt giving them enough ammunition to start the whole sick cycle off again, but so be it.” And I was right: that’s exactly what they did.

In the comment thread under the original piece someone claiming to head the moderating team at DSMO posted what looked very much like an apology: “Firstly I wish to apologise to Cath if some of the comments did offend her” he said, “I, for one, will try to watch out for the comments that upset Cath so much, but such is the nature of some people on the internet I feel we can only do our small part to stop the maliciously intent.”

And yet two months later, in June 2011, just when I thought things were starting to die down over DSMOgate, here’s the comment that Richard ‘Ricardo’ White, the site owner remember, tried to post to this blog:

You see, you’re in the criticism business and we all know you just love to dish it out. I’m in that business too and as any primary school child knows, if you dish it out, you have to be prepared to take it too. You seem to be unfamiliar with this concept. I’ve been on the receiving end more times than you could imagine. Rightly so, too.

Unlike you, I don’t expect never to be challenged. Does this bother me? I can honestly say, not one iota. Your brand of hilarious left-wing nincompoopery is absolutely ripe for ridicule. You love to portray yourself as the victim, but you’re nothing of the sort. You and your fellow arch ‘Liberals’ are in truth the least liberal people on earth. You ruthlessly defend your own opinions and will not accept any criticism or suggestion that you may be wrong. Is this the free society you long for? Is freedom in Cathland purely selective? It would seem so. I imagine that, to you, Joseph Stalin was just a cuddly, misunderstood champion of the poor. So here it is, Cath. I don’t give a shit if you’re offended. As long as you’re dishing it out, you’re going to be taking it too, whether you like it, or not. Now, polish those shoes, straighten that blazer and tie and get ready for assembly.” 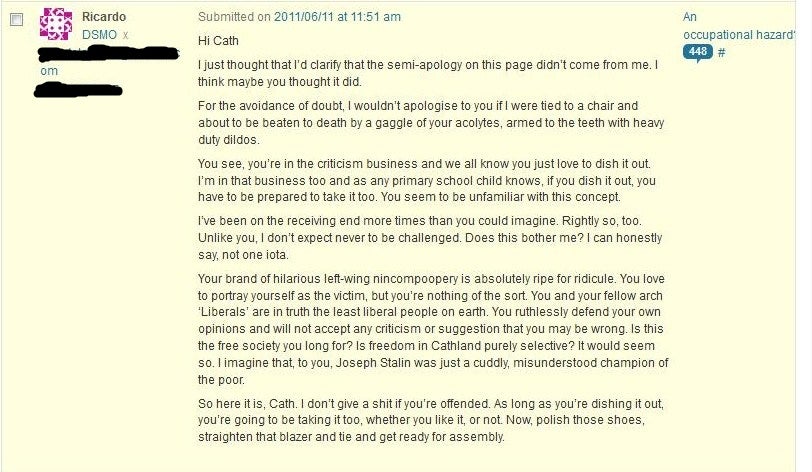 And here are some more comments Richard White has tried to post to this blog since: these ones are from October 2011: 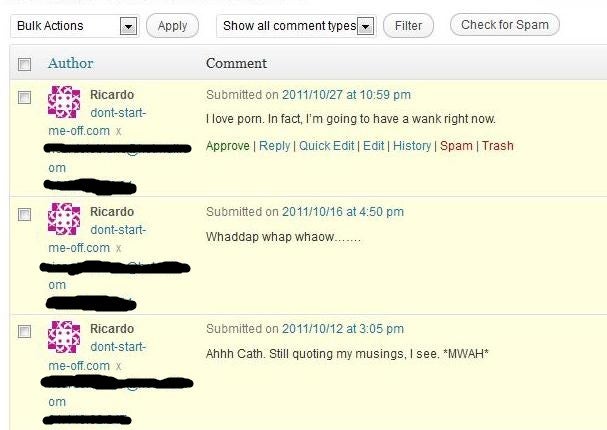 The two Cath Elliott pages on DSMO were taken down pretty quickly once the site owners realised how much bad publicity they were getting over them. However, in June 2011, after I’d made reference in a Comment is Free piece to the Internet hate I’d been experiencing, they set up another page about me – The DSMO Tucker Jenkins thread.

Here’s a pdf of the cached page that I managed to grab when they took the site down the other day: if you want to read the whole thing you need to start from the bottom of the page and read up.

And here are some of the comments about me from that page and from other pages across the site: 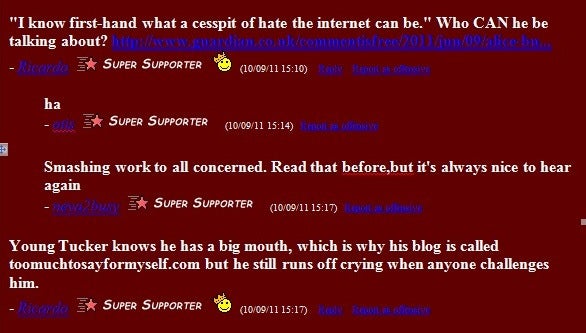 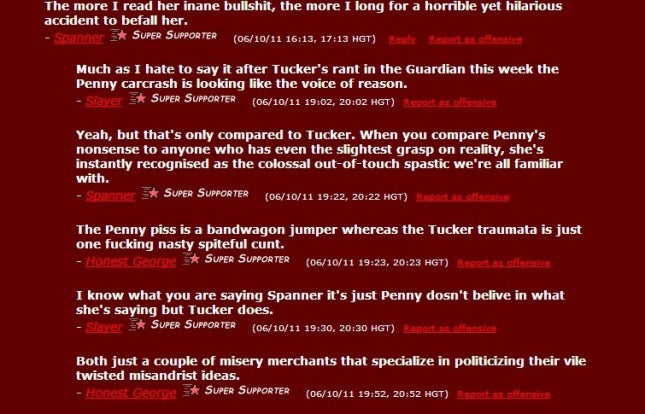 Occasionally people would complain that the Cath Elliott pages had been removed. Here’s the moderator’s response to one of those complaints – the moderator of the site that let’s remember again “never set out to hurt anyone” . 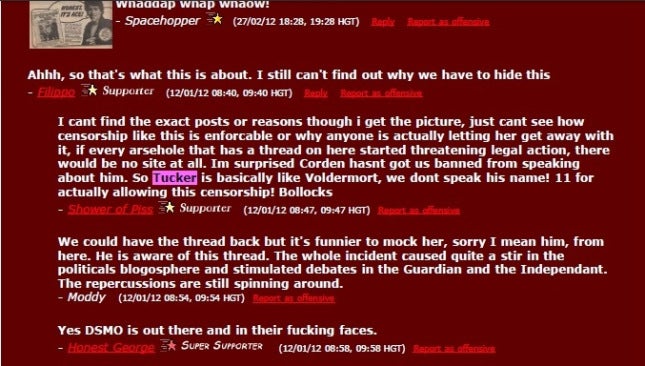 They knew I was keeping an eye on the thread because in my contribution to Helen Lewis’s New Statesman piece about online misogyny – “You should have your tongue ripped out”: the reality of sexist abuse online – I made the mistake of quoting one of the comments from the DSMO Tucker Jenkins thread. So, they knew I was reading the comments, they knew I was now aware I was being referred to on the site as Tucker, and rather than take any of that down they instead took great pleasure in the hurt they knew they’d be causing.

During the nearly two years this has been going on I’ve had the occasional Tweet from Richard White. Tweets that have come totally out of the blue and as you can see have been unrelated to anything I’ve been tweeting about: 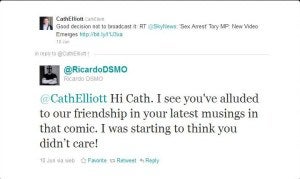 And it hasn’t just come from White. Here’s an exchange I had in August last year with @StephenBreen4, who posted on DSMO as ‘ebeneezer‘: 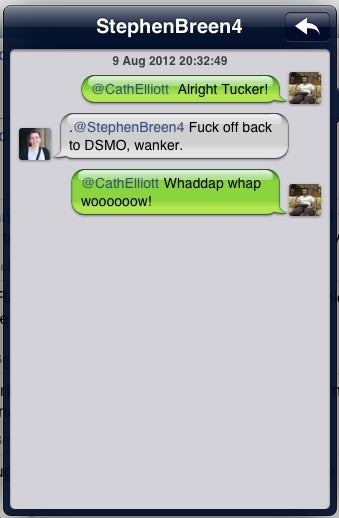 And here’s White’s response when Breen went onto the Tucker Jenkins thread to report back on my sweary response:

Sorry, what was it White said to the Guardian reporter about trolling?

The only decent thing the DSMOers have done for me in the last two years is not take the piss when my mum died. Yes seriously, I’m actually grateful to them for that. Imagine losing one of the most important people in your life, going through all the emotions that comes with grief, and at the same time having to worry that you’re going to click on to the Internet and find some bastard having a ‘joke’ about it.

To sum up then, Richard White is lying in the Guardian when he claims that he never set out to hurt anyone. And he’s lying when he says that it was self-contained, that everyone operated within the site and no-one from it ever trolled anyone.

Oh and finally, I’ve got a message for Richard ‘Ricardo’ White: all those comments you made about me deleting your contributions to my blog because I’m allegedly some kind of anti-free-speech fascist? As you can see, I never deleted anything, I just didn’t publish them until now. Because if there’s one thing I have learned from being a ‘leftie trade union cuntard’ or whatever the expression was, it’s if you ever find yourself the victim of harassment, make sure to keep all the evidence.