When I first wrote about the sexist abuse of women online, collating the experiences of nearly a dozen writers, the response was largely positive. Many hadn’t been aware there was a problem; they were shocked. Others had assumed that they were the only ones whose every word on the web was greeted with a torrent of abusive, threatening comments.

But a few reactions stood out, among them that of Brendan O’Neill, the Telegraph blogs section’s resident contrarian. He wrote that feminist campaigners pointing this out was a “hilarious echo of the 19th-century notion that women need protecting from vulgar and foul speech”. We were, he said, “a tiny number of peculiarly sensitive female bloggers” trying to close down freedom of speech.

The best response to that argument, incidentally, comes from Ally Fogg, who wrote recently:

What you fail to understand is that the use of hate speech, threats and bullying to terrify and intimidate people into silence or away from certain topics is a far bigger threat to free speech than any legal sanction.

Imagine this is not the internet but a public square. One woman stands on a soapbox and expresses an idea. She is instantly surrounded by an army of 5,000 angry people yelling the worst kind of abuse at her in an attempt to shut her up. Yes, there’s a free speech issue there. But not the one you think.

I couldn’t have put it better myself. As the months have gone on, and more “trolls” (or “online bullies”, if you’re a semantic stickler) have been exposed, the perception that what we’re talking about when we talk about online harrassment is “a few mean comments” or an insult or two has grown.

On 12 June, I wrote about American blogger Anita Sarkeesian, who launched a Kickstarter programme to raise $6,000 to research “tropes vs women in videogames”. Donating was – and I really can’t stress this enough – completely voluntary. There are Kickstarters for all kinds of things: for example,  a “dance narrative featuring some of NYC’s most compelling performers that celebrates the pursuit of love and the joys of imperfection” doesn’t sound like my kind of thing, but God Bless Them, they are 89% funded towards their $12,000 goal.

But a big swath of the internet wasn’t prepared to live and let live in Sarkeesian’s case, and began spamming her YouTube video comments with a pot-pourri of misogynist, racist and generally vile abuse. Each one individually was grim; together they constituted harassment. (You can read the full story in my blog here).

Since then, Anita Sarkeesian has been subjected to a good deal more harassment. Let’s run through the list for anyone who still thinks this issue is about a few mean words. 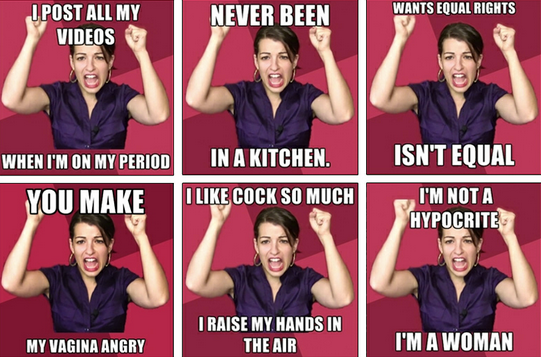 This is the kind of stuff people have been sending to Sarkeesian’s inbox, repeatedly, and posting on the internet in an attempt to game her Google Image search results. There have also been drawings of her in sexually degrading situations: 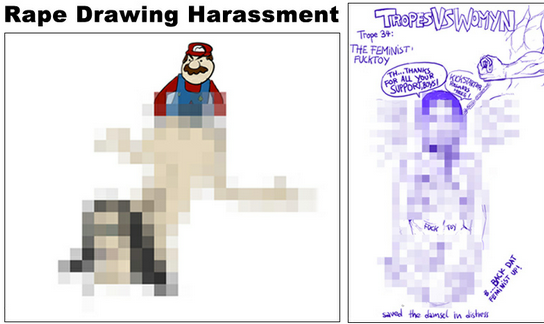 Both these sets of images are taken from Sarkeesian’s blog post documenting the harassment (and are reproduced with her permission). They have been posted on the web generally, and also sent specifically to her Facebook page, Twitter account and YouTube channel. The second set show, in her words:

The first image depicts a woman drawn to resemble me who is tied up with a wii controller shoved in her mouth while being raped by Mario from behind. The second image is another drawing (clearly sketched to resemble me) featuring a chained nude figure on her knees with 5 penises ejaculating on her face with the words “fuck toy” written on her torso.

These take a couple of forms: either the creation of specific sites dedicated to trashing you (and again, to come up in Google searches of your name) or posting your details on established forums where haters like to hang out. In Sarkeesian’s case, that has involved posting her phone number and address. It’s hard to see that as anything other than an attempt to intimidate her: “We know where you live”.

This one is so incredible I had trouble believing it existed. 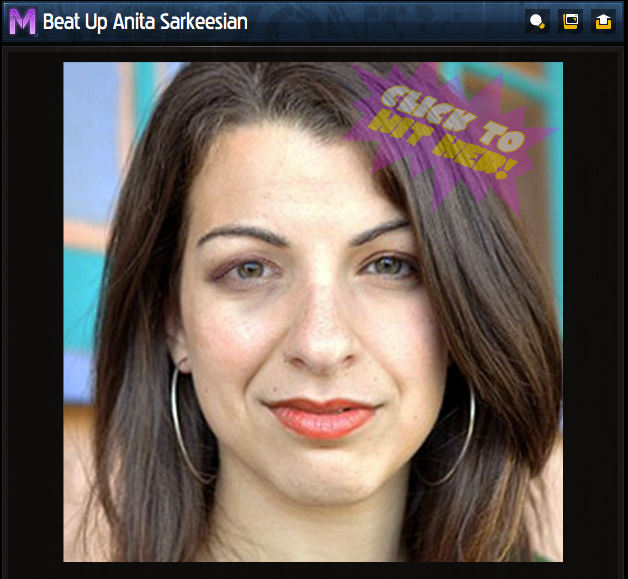 As you click the screen, bruises and welts appear on her face. 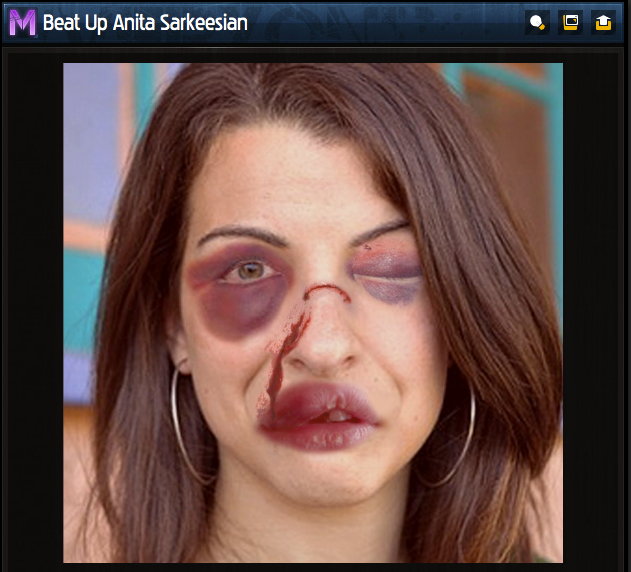 I find this fairly disturbing – the idea that somewhere out there is a man – a 25-year-old from Sault Ste Marie, a city in Ontario, Canada, who was offended enough by Sarkeesian’s Kickstarter project that he made this.

In the description accompanying the games, he adds:

Anita Sarkeesian has not only scammed thousands of people out of over $160,000, but also uses the excuse that she is a woman to get away with whatever she damn well pleases. Any form of constructive criticism, even from fellow women, is either ignored or labelled to be sexist against her.

She claims to want gender equality in video games, but in reality, she just wants to use the fact that she was born with a vagina to get free money and sympathy from everyone who crosses her path.

Some of the commenters on the game have expressed disgust, but not all of them. One wrote:

You are so right, sir. It’s the execution which lets this game down.

Hacking is gaining entrance to someone’s private data or website, while DDOSing – using “denial of service” attacks – involves sending a website’s server so many requests to load the page that it crashes.

That’s what happened to Sarkeesian’s site as her story got shared around the world. This image was posted as a way of bragging about taking it down: 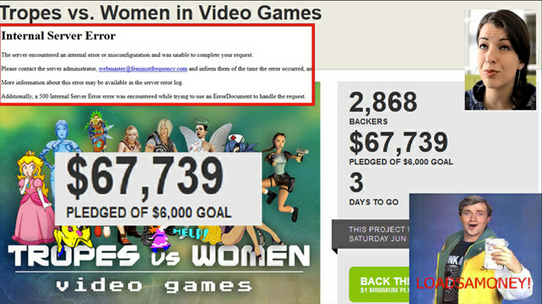 Sarkeesian is rare in sharing so much of the harassment that she has been subjected to — and it’s a brave choice for her to make. Every time I write about this subject, I get a few emails from women who’ve been through the same thing (and I’m sure there are men, too). They tell me much the same story: this happened to them, but they don’t want to talk publicly about it, because they don’t want to goad the bullies further.

If you were Anita Sarkeesian, how would you feel right now? She’s somebody with a big online presence through her website, YouTube channel and social media use. All of that has been targeted by people who – and I can’t say this enough – didn’t like her asking for money to make feminist videos.

I think Sarkeesian has been incredibly courageous in sharing what’s happened to her. Those obscene pictures are intended to shame her, to reduce her to her genitals, and to intimidate her.

I’m sure there’s plenty here which breaks the law – both in the UK and the US. But the solution here probably isn’t a legal one: it’s for everyone involved to have some basic human decency. This isn’t just a few rude words, and it isn’t OK.