The proximal cause of the news is the launch of a new feature on Twitter, expanded tweets, which lets publishers show previews of what a tweet is linking to directly in the interface: 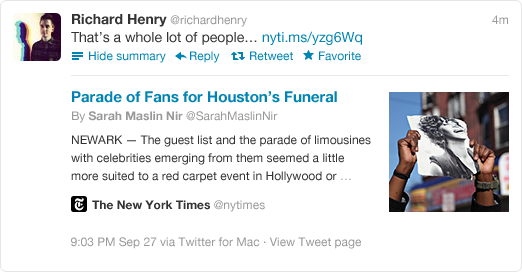 Bruce Daisley’s Diary: Twitter’s death spiral, the Qatar trap, and why watching Matt Hancock in the jungle is no fun

Yet really, the news goes to the heart of Twitter’s strategy as a company. Like most companies of its pedigree, it makes money through advertising. It sells tweets, trends, and promotion in the “who to follow” box. But if you use a third party twitter app – that is, any app not made by twitter, like Tweetbot for iPhones, Hootsuite on the web, or Ubersocial on Android – you don’t see those.

That is bad enough for the company, but up to now, the users of those apps are a minority on the service. The vast majority of twitterers use the website itself, or one of the official clients on mobile devices. So why should they care that nerds are going to be forced to do what they do normally?

Because Twitter aren’t just trying to monetise the users they currently miss out on. They also want to – at the risk of being alarmist – block the exits.

In April 2010, the company acquired the developers of Tweetie, the then-most popular independent app (this was at a time, hard as it is to believe, when they didn’t have an official app), and rebranded it as the official app. Less than a year later, they introduced a feature known as the “quickbar”. In terms of usability, it was one of the most obnoxious features added to the service since it’s inception – an always-on view of the trending topics at the top of the screen which took up valuable space on the small phone.

The quickbar was such a failure that twitter pulled it from the app, in the fear of sparking an exodus to other clients, but at the same time as backtracking on that, the company made its first ominous pronouncement on the future of third-party developers, warning them not to:

This is, of course, what most apps do – they replace, rather than adding to, what the official client can do – but for the last year, Twitter has stayed quiet on its threats. Until now. Next time Twitter introduces something similar to the quickbar, there will be nowhere to run.

They can take Tweetbot from our phones, but they’ll never take it from our hearts. They’ll just disable the API so it can’t access the site.