Who’s that at your local Tesco? Smartly dressed in a suit, holding a bag of sugar or a can of beans, smiling awkwardly at a camera? Why, it’s your identikit Conservative MP, of course!

This is the impression given by a recent, oddly uniform, spate of tweets and Instagram posts by Tory MPs, all posing at food bank donation drop-off points in branches of Tesco:

Today I visited @Tesco Wellington Road to meet volunteers for @TrussellTrust and @FareShareUK. I was pleased to make a donation to the local food bank to help those who are vulnerable and in need #EveryCanHelps. pic.twitter.com/RbSjHixgJX

Today I visited @Tesco_Scotland in #Galashiels with a food donation for the local food bank.@Tesco are working with @TrussellTrust and @FareShareUK to help those who find themselves in need.
You can mark #StAndrewsDay and help by donating long-life food too.@TescoGalashiels pic.twitter.com/p96Wwy7tMh

Today I visited @Tesco Forfar to drop off a food donation and meet the Angus Foodbank team. Tesco are working with the @TrussellTrust and @FareShareUK to help those who find themselves in need, and you can help by donating long-life food at your local store too. pic.twitter.com/3oK5ExaVBr

At @Tesco Alloa earlier making my contribution to their annual food collection with @TrussellTrust and The Gate In Alloa. Great initiative, helping those in need at Christmas. You can help too by donating any long-life food to your local store. pic.twitter.com/60eE8MoA9Q

It’s not just Conservative MPs. Tesco contacts MPs and devolved assembly members every year to ask for their support of collections held in their local stores. It has run its Food Collection campaign (an annual three-day affair ahead of December, foodbanks’ busiest time of year) with the UK’s biggest foodbank charity Trussell Trust and food distribution charity FareShare since 2012, when the “#everycanhelps” hashtag began.

More than 200 elected representatives of all parties have visited their local collections this year to support the campaign, which took place last weekend. These include Andrew Gwynne, Labour’s shadow communities and local government secretary, who dropped into a Tesco Express in Denton, Manchester, six days ago and posted a similar picture:

‪This morning I’ve dropped into @denton6544 Haughton Green to donate some food to their @fareshareuk collection. ‪I want to live in a society where food banks aren’t necessary. Let’s commit to make food poverty history: in the meantime, please give what you are able to. #EveryCanHelps

Of course, the campaign’s ultimate aim is to maximise donations to the charities, and MPs assist by raising awareness and urging others to donate.

But the tweets by the Tory politicians, particularly the four Scottish MPs who publicised very similar photo ops in the space of 24 hours, look more like a press junket than a government engaging with a domestic crisis.

Their similarity has led to people accusing them of taking lines from the party’s press office:

If you want to give the impression you’ve spontaneously donated to a food bank, probably best not to mostly copy and paste whatever the Scottish Tory PR office sent over… pic.twitter.com/oBVoXAMaie

Scottish newspaper The National collated the tweets, commenting: “On closer inspection, it appears that they may have been operating on orders from Tory HQ, since each MP tweeted almost the exact same message…”

I’ve asked Scottish Conservative party HQ if the tweets were dictated or coordinated, but have yet to hear back.

Either way, it’s not a good look. Simply turning up for photo ops without addressing the underlying causes of food bank use rings very hollow. This is particularly true for Tory MPs, as politicians representing the party of government. Even in Scotland, this is a jarring move, as despite the SNP being in government, the austerity agenda imposed by Conservative governments in Westminster has affected Scotland too.

Indeed, the Secretary of State for Scotland David Mundell faced protesters and had to leave via a back door when he opened a food bank in Dumfries three years ago. The Dumfriesshire, Clydesdale & Tweeddale MP was accused of hypocrisy by protesters, having previously denied that government “welfare reform” issues were behind food bank use.

One source tells me that ministers tend to organise visits discreetly, without doing any publicity, to avoid any backlash in their local press.

While the Trussell Trust – which is non-party political – doesn’t invite politicians specifically, it does “provide foodbank volunteers with guidance that is clear this is not a photo opportunity but a chance to have a conversation about the foodbank’s work if volunteers feel comfortable”, says a spokesperson.

“Their support for foodbanks shouldn’t begin and end with a donation or photo,” they tell me. “They need to do more and our policy team follow up centrally with any politicians that have visited collections to ask for action. This year we’ll be highlighting the action that needs to be taken on the five-week wait for Universal Credit.”

Neil Coyle, the Labour MP for Bermondsey & Old Southwark who chairs the All Party Parliamentary Group on Foodbanks, even wrote a letter of advice to MPs on how to approach visiting foodbanks this time last year, ahead of the Christmas period: 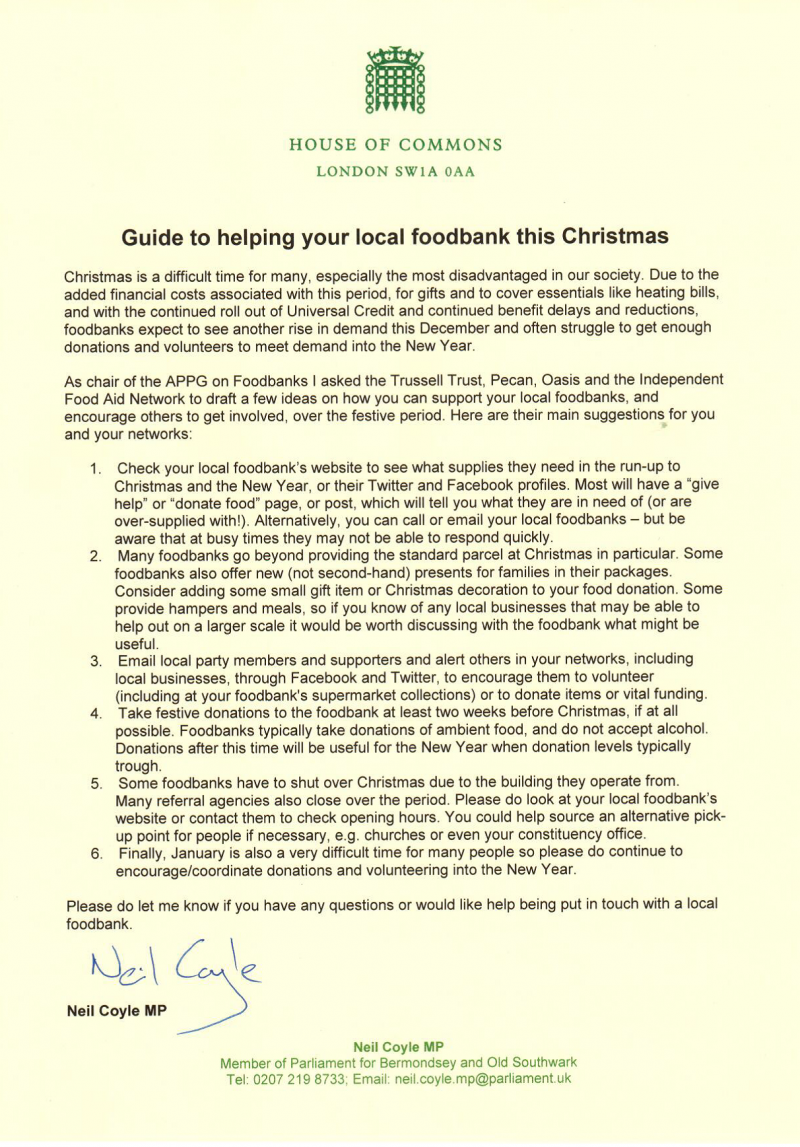 He will be updating this advice this year in light of the recent visits by MPs to ensure sensitivity at the busiest time of year for foodbanks – particularly as a result of Universal Credit and other government policies.

“Far and away, the biggest issue affecting foodbank use is Universal Credit,” he says.

On average, foodbanks in areas where Universal Credit has been in place for a year see a 52 per cent increase in demand, and foodbank use is up 13 per cent in areas where the new system has been rolled out for three months or less, according to the biggest foodbank charity the Trussell Trust.

“Turning up and grinning is simply, well, it’s insulting,” Coyle tells me. “Turning up and being practically supportive is what foodbanks need – and trying to work out how to reduce pressure on foodbanks would be the sensible thing to do.”

The biggest single reason for a food bank referral, accounting for 31 per cent in the six months leading up to November this year, was benefits not covering living costs. More than a fifth of referrals to its foodbank network resulted from delayed benefit payments – a third of which were waiting specifically for their first Universal Credit payment.

“If you’re going to engage with foodbanks in the run-up to Christmas, learn who it is they’re supporting and why,” says Coyle, who also refers to children in families that cannot claim benefits (immigration policy means “no recourse to public funds” for about 50,000 people with dependents) using foodbanks on an “almost routine” basis. “This is a direct result of government policy.”