At the outset of the Covid-19 pandemic, the Prime Minister, Boris Johnson, insisted that the UK was “extremely well prepared” for the crisis to come. Yet faced with the reality of a new and fast-spreading coronavirus, a human  catastrophe resulted.

Last March, Patrick Vallance, the chief scientific adviser, remarked soberly that limiting British deaths to 20,000 would be a “good outcome”. At the time, this assessment stunned many. But it has proved an underestimate. Britain has now suffered over 100,000 recorded deaths from Covid-19, the highest toll in Europe and one of the highest per capita death rates in the world. In this special issue, we reflect on the meaning of this moment of national mourning. As the historian Richard J Evans observes in his essay on page 25, the Covid death toll is “more British civilians than died in both world wars combined”.

Some will say that this outcome was inevitable – or at least excusable. The UK is a densely populated country and an international travel hub, and this is the worst pandemic since the Spanish flu of 1918-20. Yet we should resist such fatalism: Britain’s chastening death toll is a consequence of executive failure and avoidable errors.

From the start of the pandemic – when there was time to prevent a catastrophe – the UK failed to grasp the seriousness of the threat. Mr Johnson treated Covid-19 first with libertarian insouciance (boasting on 3 March that he “shook hands with everybody” at a hospital) and then with indecision.

On 30 January, the World Health Organisation declared Covid-19 to be a “Public Health Emergency of International Concern”. However, two months passed before the UK government imposed a lockdown, 14 days after Italy had done so. This error was compounded by other mistakes such as the despatch of large numbers of untested patients from hospitals to care homes, the abandonment of community testing on 12 March and the failure to mandate mask-wearing in shops until 24 July.

It was not only Mr Johnson who failed to reckon with the lethality of Covid-19. As our medical editor, Dr Phil Whitaker, writes on page 21, the British scientific and medical establishment was “blindsided by the first wave”, having prepared for the wrong pandemic: an influenza virus. On 13 March, Mr Vallance spoke of the need to “build up some kind of herd immunity” by seeking only to contain, rather than to suppress, Covid-19. Such a strategy – which “lockdown sceptics” continued to advocate in right-wing newspapers – would have resulted in an even more forbidding death toll.

Last summer, when new daily Covid-19 cases fell as low as 352, the UK government could have pursued a strategy of elimination, as the Asia-Pacific countries have done. But it instead told diners to “Eat Out to Help Out”, implored workers to return to offices, and allowed its borders to remain open for summer holidays. Having been warned by scientists in July of the possibility of a significant new Covid-19 variant in winter, the government helped create the conditions for it to thrive.

A year into the pandemic, we have become inured to daily death tolls that would have once shocked us, but 100,000 British deaths is a moment to reflect on those who have been lost. Covid-19 – and the isolation from loved ones that it entails – is a cruel way to die, and some have been robbed of decades of fulfilling life. Other patients who survived are suffering from “long Covid”, with debilitating and enduring symptoms.

Britain’s rapid vaccination programme, admirably implemented by the NHS, and the third national lockdown – again imposed too late – have begun to reduce Covid infection rates, but the effects of this pandemic will long endure. In the decades to come, because of climate change and the proliferation of new zoonotic diseases, we will face many other lethal threats. The Covid-19 pandemic, and the British government’s response to it, should serve as a salutary warning.

This leader appears in this week’s special issue of the New Statesman, “The Lost”, subscribe here. 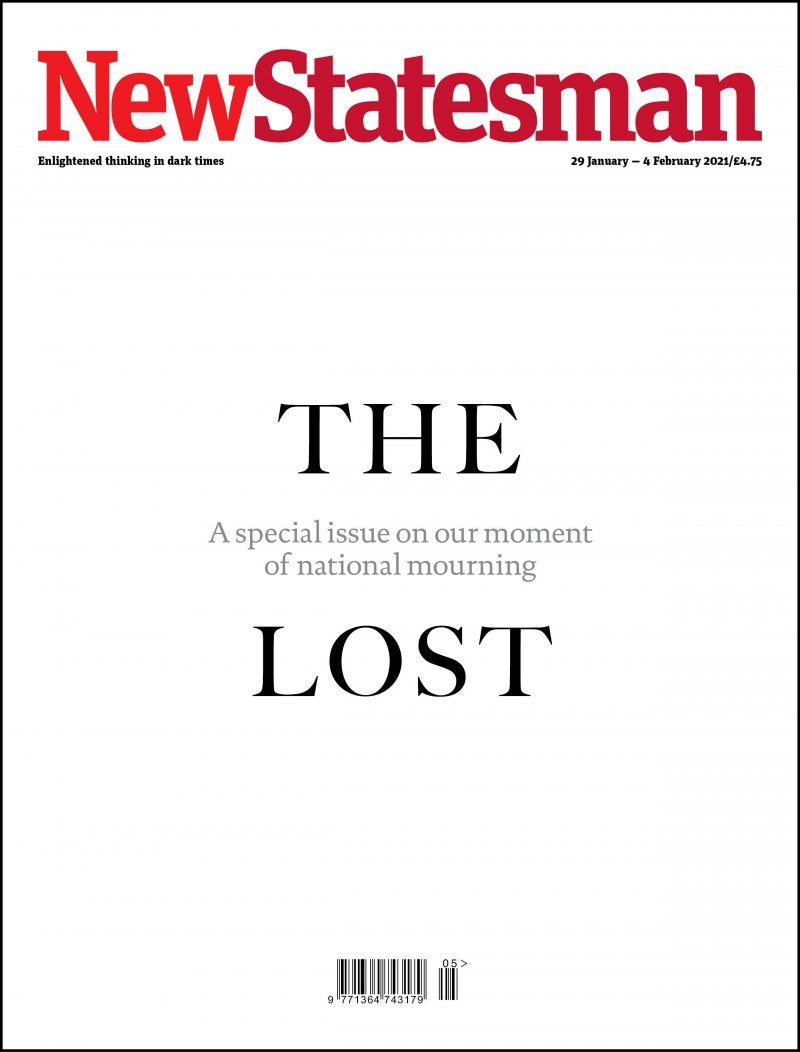 This article appears in the 27 Jan 2021 issue of the New Statesman, The Lost