In September 2019, during the evening rush hour on the London Underground, a District Line train pulled into Whitechapel station in east London. Squeezing between passengers, a young woman with a large rucksack walked down the carriages, selling copies of a magazine. Known as Pixie, she was staying at a nearby homeless shelter.

“Have a read, guys, it’s awesome – I read it myself,” she said, fist-bumping those commuters who bought a copy. If her sales pitch sounds a little too enthusiastic for a Big Issue seller, that’s because Pixie was selling something different – a new underground publication called Dope.

Across Britain, from Brighton to Edinburgh, Dope is distributed for homeless people to sell on the streets. People ranging from rough sleepers to asylum seekers can collect the newspaper for free (copies are stocked in soup kitchens and bookshops), sell it for the cover price of £3 and keep the proceeds. The ninth issue was published on 9 March and had a circulation of 20,000 – that amounts to £60,000 for homeless sellers.

In spring 2018, the quarterly paper was launched with a print run of just 1,000 copies by a publisher called Dog Section Press, which is based at the world’s oldest anarchist publishing house.

Hidden between a KFC and a nail bar in a nondescript alley behind Whitechapel station, Freedom Press is a historic industrial building that’s home to a collective of anarchist organisations. It is built from sandy brick, with red-framed sash windows, and covered in anarchist bumper stickers: “Don’t vote, It’ll only encourage them!”

The Dope team is based on the top floor, up a narrow staircase of paint-flecked floorboards. Craig Clark, the 37-year-old anarchist and founder of Dope, wore a woolly hat, black jumper and bright blue Adidas tracksuit trousers. He started Dope because he wanted to branch out from his years spent leafleting for left-wing causes and groups such as the Stop The War Coalition.

“You can’t hand out enough fliers to create a revolution,” he said, sipping his tea from a mug captioned, “You don’t have to be an anarcho-syndicalist to work here… But it helps”.

“With political groups I’ve been involved with in the past, what usually happens is that people say, ‘Oh, I made this radical newspaper but now I’ve got 50,000 unsold copies in my bedroom and we can’t get rid of them,’” Clark said.

He decided to establish a project to help vulnerable people “by deed” rather than “by propaganda”; a publication that homeless people can sell without many of the formalities of the Big Issue, which makes vendors buy their own stock.

If the Big Issue’s motto is “working, not begging” and “a hand up not a hand out”, Dope’s more radical ethos is closer to “solidarity not charity”.

Funded by book sales, online subscriptions and a Patreon crowdfunder, Dope is thriving – a sign on the front of Freedom Press alerts vendors that it is currently out of stock.

“We can’t get enough copies for people to distribute!” Clark said. “It feels like we have created this perfect, inverted pyramid scheme – managing to funnel money down to the people who actually need it, rather than it being sucked up the other way.”

Stylishly designed with edgy covers by illustrators and street artists, Dope’s contributors include the poet Benjamin Zephaniah and musicians Sleaford Mods. While its content is socially conscious, Dope is not overtly political.

“We didn’t want it to be called ‘Flag’ or ‘The Red Star’,” said Clark. “Our target audience is anybody.” One vendor sold copies to besuited workers outside the Bank of England, and made £100 in a day. 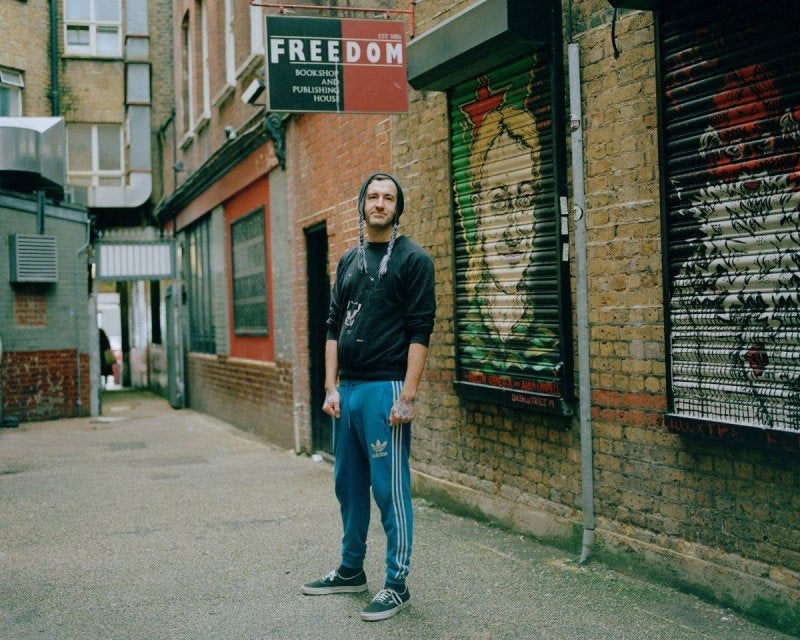 “We wanted to create a clean aesthetic that appeals to everyone,” said the magazine’s designer Oriana Garzon, a 30-year-old dressed all in black with tortoiseshell glasses, who moved to the UK from Colombia in 2019.

Instead of ID cards, badges or tabards, Dope sellers carry transparent plastic bags labelled “official vendor” that cite the Local Government (Miscellaneous Provisions) Act of 1982. The law allows the sale of newspapers without a permit and dates back to the English Civil War.

Where begging and rough sleeping are illegal under the 1824 Vagrancy Act (legislation so archaic it bans “lodging in any barn or outhouse… or in any cart or wagon”), selling papers is a legitimate pursuit of income for those on the streets.

“You create a new way of seeing homeless people. They’re shadows in the city, but with a newspaper they exist. It’s horrible that society works like that, but that’s the reality,” said Garzon.

“None of us had worked on a homelessness project before, so we had our own prejudices: ‘What if the money’s spent in this or that way,’ or ‘Maybe we’re keeping people homeless?’” Clark said. “A lot of people think like that, and so homelessness is criminalised. But the public has responded positively, and it gives the sellers a chance to interact with people as well.”

Dope’s circulation, which has risen from 1,000 in 2018 to 20,000 in 2020, is symptomatic of Britain’s rough sleeping crisis. The number of people on the streets has increased by 141 per cent since 2010, though rough sleeping figures are thought to be underestimated, according to the UK Statistics Authority.

“We don’t talk about injustice just because we’re anarchists. It’s simple: people are hungry and cold and without sleep, so they need something to offer in return for money,” said Garzon. “If a human doesn’t have these basic resources, then the system is not working. This newspaper is just to relieve that a little bit.”

This article appears in the 25 Mar 2020 issue of the New Statesman, The crisis chancellor