Last night, shortly after Boris Johnson finished a speech so eloquent that it made you genuinely long for the wit and charisma of Theresa May, one of his advisors began briefing. Despite what the Prime Minister may have said, suggested this advisor, who one suspects to have a strange obsession with branching histories and the word “Potemkin”, an election was in the offing. They even named the date: 14 October.

This rather confused me, because 14 October will be a Monday. And Britain doesn’t hold elections on a Monday, does it? It holds them on Thursdays.

Except that, as with trifling things like “leaders should stand down when they start losing votes”, it turns out that this is one of those “more of a guideline than a rule” things.

In England and Wales, local elections are held, by statute, on the first Thursday in May. That, though, is about as far as the actual law goes – there is an exception, which we’ll come back to – and even then there are workarounds in emergencies, like the 2001 foot and mouth crisis. Other elections can be held on whatever day the government chooses.

And historically, as it happens, it’s chosen all sorts. “Election Day” was only invented around a century ago: before then, elections took place over four week periods. The 1918 election, though, took place on a Saturday, 14 December. The next five included two Wednesdays, two Thursdays and a Tuesday.

Since 1935, though, Thursday has become the norm, and you can find all sorts of theories as to why floating around. That Thursday was market day, so people would be in town anyway. That it was early closing day at the shops, so they wouldn’t be at the shops. That it was the day before payday, so the men wouldn’t all be drunk. That it was as far as possible from Sunday, to minimise the chances of the church getting involved.

One of the more plausible explanations, at least to my mind, is that holding an election on a Thursday means results will be clear some time on Friday, giving the new Prime Minister a weekend to form their government: by the time the financial markets and so forth reopened on Monday, everything would be sorted. But I can find nothing to suggest that this is any more true than the fears about drunken louts or turbulent priests, so who knows. Perhaps, as with so much of the British constitution, it’s just a habit we got into. 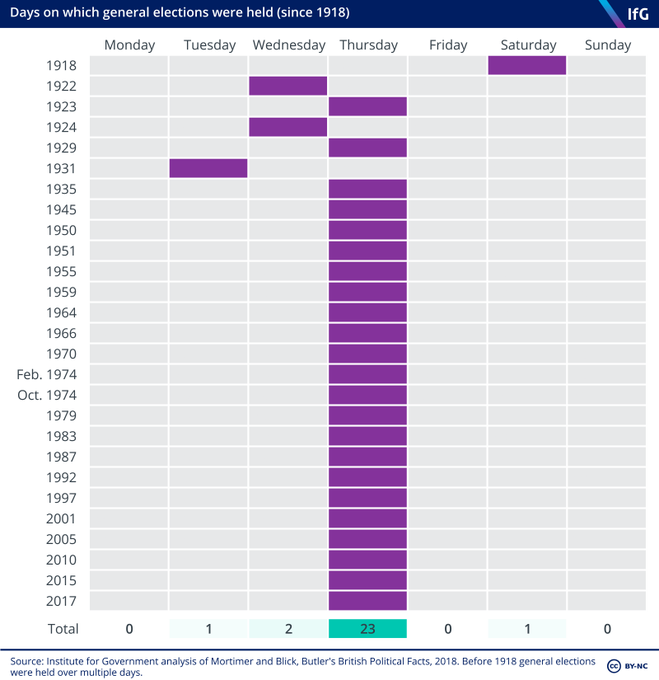 Days on which Britain has held its general elections since 1918. Image: Institute for Government, via Lee Wratten.

I said there was another law that stated that election day should be Thursday: the reason I’ve taken a while to get to it is because it’s not clear it actually matters.

The law in question is the Fixed Term Parliaments Act 2011, which states that election day would be the first Thursday in May every five years. Since that came in, though, we’ve had one election on that basis (2015), and one which circumvented the law entirely because Theresa May thought she’d get a big majority (2017), which, lol.

The 2019 election – you should probably start getting comfortable with that phrase – will circumvent that law too, which would mean a score of two to one against. The Fixed Term Parliament Act has done all sorts of terrible things to our politics but they ironically do not include fixing the term of parliament in any meaningful way.

Britain is actually quite unusual in favouring Thursday elections. Any political nerd worth their salt will know that the US law puts election day on a Tuesday. But around the world – in Australia, in Japan, in most of Europe – weekend elections are more common, largely because they increase turnout. If one wanted to be cynical, one might almost suspect that the authorities in the US and UK aren’t actually that bothered about turnout.

While we’re here – what about the time of year when Britain holds elections? Again, it’s easy to think of spring as the “natural” time for election season, simply because every election since 1979 has been held in April, May or June, so you’d have to be at least 62 to have voted in any other month.

Before that, though, they were all over the place. This makes sense, really, because in a parliamentary system elections will happen when a government falls: there’s no reason that should be more likely to happen in spring than at any other time of year. If we do go to the polls next month, it’ll be the seventh October election of the last century. 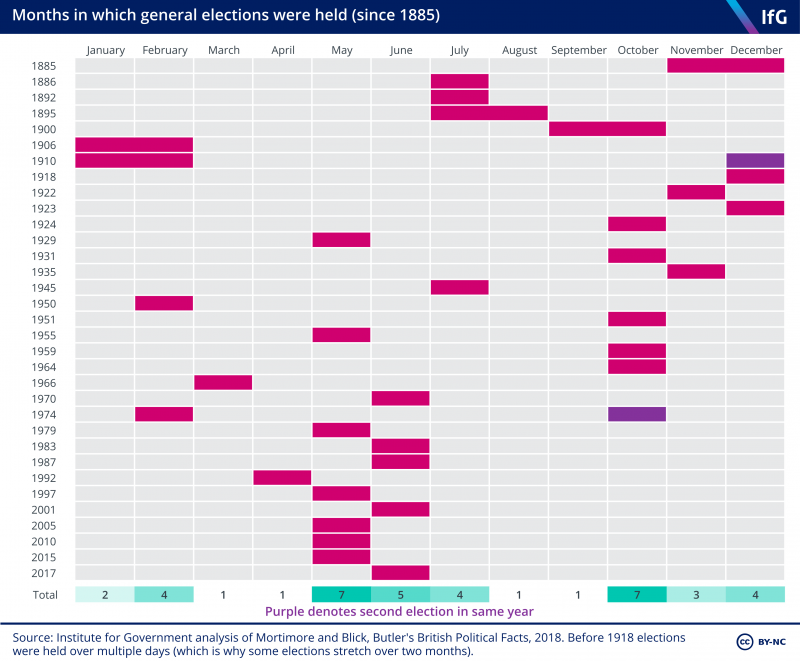 Months in which general elections were held since 1885. Image: Institute for Government, via Lee Wratten.

At any rate – Britain has never had an election on a Monday in October before. But there is absolutely nothing to stop us.