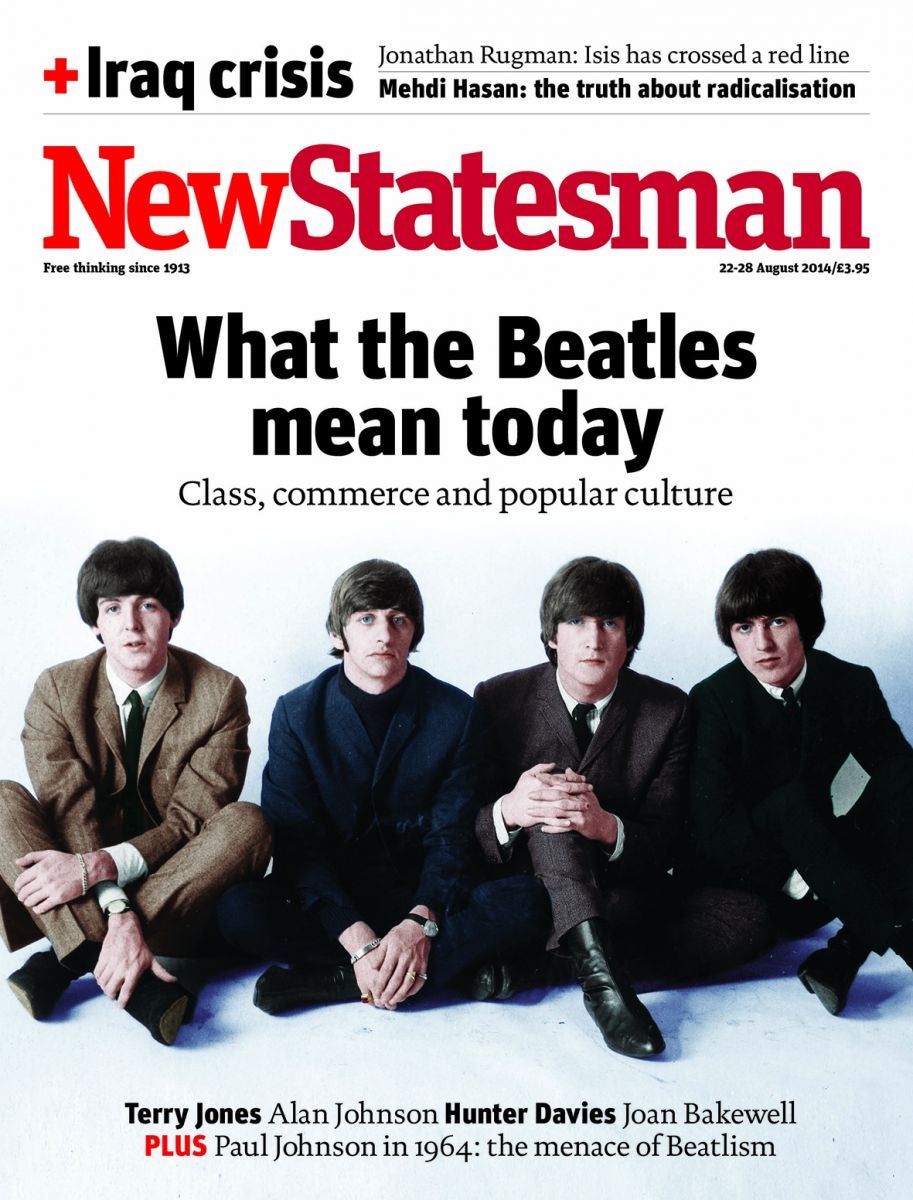 JONATHAN RUGMAN: ISIS HAS CROSSED A RED LINE WITH THE BEHEADING OF JAMES FOLEY

Can the UK save the United Nations from Donald Trump’s cuts?

On the 50th anniversary of their arrival in New York, Hunter Davies considers the band’s extraordinary legacy

From the Archive: Paul Johnson on “The Menace of Beatlism”

DONALD MACINTYRE: WHY THE BADRAN FAMILY HAS BECOME SYMBOLIC OF THE GAZA CRISIS

“ISLAM FOR DUMMIES”: MEHDI HASAN ON THE BANAL TRUTH ABOUT RADICALISATION

HELEN LEWIS: WHY ISN’T THERE A UKIP OF THE LEFT?

LAURIE PENNY ON THE FERGUSON PROTESTS: WELCOME TO AMERICA – WHERE THE POLICE SHOOT AN UNARMED BLACK TEENAGER AND CALL HIM A VILLAIN

BRYAN APPLEYARD ON THE NEW LUDDITES: WHY DIGITAL PROPHETS ARE TURNING AGAINST THE MACHINE

ANDREW MARR AND MARK LAWSON AT THE EDINBURGH FESTIVAL: THE JAMES PLAYS TRILOGY AND THE FRINGE’S RALLIES FOR THE YES CAMPAIGN

JONATHAN RUGMAN ON JAMES FOLEY: “A RED LINE HAS BEEN CROSSED”

Jonathan Rugman, foreign affairs correspondent for Channel 4 News, reports from the Kurdish city of Erbil, just half an hour from the front line with the
“gun-toting crazies of Islamic State”. Rugman is equally horrified and perplexed by the execution of his fellow journalist James Foley by the Islamic State (formerly “Isis”) jihadists:

. . . James Foley disappeared near the Syrian town of Taftanaz in November 2012. I was in the same town a few months earlier, welcome (or so I thought) to report on the uprising against Bashar al-Assad. Now, James has been executed and I cannot understand what changed in the hearts and minds of some of those who took us in and helped us. After not one but a multitude of jihadist atrocities too many, a red line has been crossed at last.

Rugman also reports on the rescue of Yazidi refugees from Mount Sinjar by the Iraqi army, having struck a deal with the pilot of one of the ancient Russian-made helicopters being used for the mission:

Our pilot warned us that the Yazidis might try to storm the helicopter and so it proved: a desperate crush, bodies clambering over one another and people screaming. I found myself dragging dehydrated children towards the back. One of the Iraqi machine-gunners kicked refugees away so he could shut the door. Then, when we thought it was all over and our cargo of human misery was airborne, the gunner started firing because jihadists were shooting at us from below.

Rugman is bothered by the west’s apparent lack of interest in the plight of Iraqi Christians who were hounded out of Qaraqosh by jihadists, but at least, he says, the Yazidi exodus has caught the world’s attention:

By the time I am on the plane home, I have reduced a presenter on Fox News to tears with my tales of suffering Yazidis – tales undoubtedly helped by how photogenic these gentle mountain people are. Both the BBC and ITV claim to have found babies named “Hope” born on the mountain, while I’ve met a mother who had her infant suckle the milk of a mountain goat to survive.

For this week’s cover story, the NS columnist Hunter Davies considers the legacy of the Beatles on the 50th anniversary of their arrival in New York. Davies revisits Paul Johnson’s February 1964 column for the NS (reproduced in this issue) in which the future Statesman editor declared the band a “mass-produced mental opiate”, a “bottomless chasm of vacuity” and the “apotheosis of inanity”:

The thing about popular culture is that liking it, or not liking it, has little to do with brains or intellect, education or social background. It is the backdrop to our lives, influencing us at vital stages, sinking into our souls, usually staying with us for ever.

One of the strangest things about the Beatles phenomenon, Davies argues, is the potency of their legacy:

. . . the further we get from them, the bigger and more influential they become. The scruffiest scrap of paper signed by them is worth a fortune. Universities all around the world are studying their work. The 50th-anniversary celebrations this year of their arrival in New York seemed to receive just as much coverage in the United States as the band did back in 1964. Quite recently, there have been two academic books suggesting the Beatles helped bring about the fall of communism. Even I wouldn’t go that far.

Elsewhere in the issue, Alan Johnson, Geoff Lloyd, Joan Bakewell and Terry Jones pick their favourite of the Fab Four (Paul, Ringo, George and John, respectively), while the actress Maureen Lipman recalls a heady night at a 1963 Beatles concert at the Regal Cinema in Hull – and the 40 pairs of abandoned knickers found at the end of it:

As far as I was concerned, the Beatles were a nice-sounding group of young men with shiny hair and no lapels. Nothing to sing about [. . .] Then I reached my road to Damascus. In the second half, John Lennon stepped forward to the mike, thighs straining against his shiny and confining suit [. . .]

My Cornetto dangled. Sweat ran across my upper lip and down my virgin armpits. The screaming was increasing in volume and intensity. Someone was about to implode. I realised with an electric shock that the screaming someone was me.

THE POLITICS COLUMN: WHY IS THERE NO UKIP OF THE LEFT?

In this week’s Politics Column, Helen Lewis asks why nobody has exploited the potential for a radical-left alternative to Labour when many people are to the left of the party on issues such as rail renationalisation and utilities. With the Greens plagued by “loony left” headlines and holding only a tiny predicted share of the vote, and with the Socialist Workers Party imploding, there is a clear opportunity for a new party to launch a populist critique of Labour, Lewis writes. But she won’t hold her breath for it:

Voters might think Labour isn’t doing enough to protect the Health Service from those dastardly Tories but their exasperation hasn’t reached a sufficient pitch for them to give up on the party entirely. Similarly, the country might be to the left of Labour on rail and utilities but people don’t feel strongly enough about those issues for it to affect voting intentions.

There is one final factor: money. In recent years, Ukip has benefited from wealthy donors such as Paul Sykes, who spent £1.5m on a poster campaign for the party in April. There is a dearth of left-wing multimillionaires desperate to pour money into a new party and so far Miliband has managed to keep the big unions onside. If either of those things changes, we might get an answer to the question: “What on earth would a left-wing Nigel Farage look like?”

In a follow-up to his “10 Days Inside Gaza” report for the 8 August issue of the NS, Donald Macintyre recounts the latest twist in the story of the Badrans, a Gazan family whose home in the Nuseirat refugee camp was targeted in an Israel air strike. Ten-year-old Mohammed was blinded in the attack and doctors feared his entire family had been killed. It transpired that other members of the family had in fact survived the attack – but then Mohammed’s father, Nidal, was killed in another air strike on a mosque in Nuseirat. As Macintyre writes, “. . . in Gaza, happy endings are always conditional”.

The unfurling fate of the Badran family goes to the heart of the debate around Israel’s actions in Gaza and the high number of children killed in air strikes there.

The Israeli human rights organisation B’Tselem has identified 72 Gazan families of three or more people that have been killed in their own home in the course of Operation Protective Edge: 547 people in all, including 250 minors, 125 women under the age of 60 and 29 men and women aged 60 or above. Many of these families no doubt included at least one militant from Hamas or another armed group. In other cases, there is no evidence as yet that they did. B’Tselem and other human rights groups, such as al-Mezan and the Palestinian Centre for Human Rights, argue strongly that there is no justification for the high number of casualties among civilian relatives.

MEHDI HASAN ON THE BANAL TRUTH ABOUT RADICALISATION

In his Lines of Dissent column this week, Mehdi Hasan finds the reading choices of the “wannabe jihadists” Yusuf Sarwar and Mohammed Ahmed highly suggestive:

Can you guess which books [Sarwar and Ahmed] ordered online from Amazon before they set out from Birmingham to fight in Syria last May? A copy of Milestones by the Egyptian Islamist Sayyid Qutb? No. How about Messages to the World: the Statements of Osama Bin Laden? Guess again. Wait, The Anarchist Cookbook, right? Wrong.

Sarwar and Ahmed, both of whom pleaded guilty to terrorism offences last month, purchased Islam for Dummies and The Koran for Dummies. You could not ask for better evidence to bolster the argument that the 1,400-year-old Islamic faith has little to do with the modern jihadist movement.

This is the banal truth about radicalisation, argues Hasan: the young men involved are “berks not martyrs”, more Four Lions than the “long beards and flowing robes” of the Daily Mail’s imagination:

If we want to tackle jihadism, we need to stop exaggerating the threat these young men pose and giving them the oxygen of publicity they crave, and start highlighting how so many of them lead decidedly un-Islamic lives.

WELCOME TO AMERICA: LAURIE PENNY ON THE FERGUSON PROTESTS

The NS columnist Laurie Penny reflects on the stark contrast between a hipster café in the overwhelmingly white college town of Cambridge, Massachusetts where she is sitting and the Midwestern suburb of Ferguson, Missouri, where a “battle for America’s soul” is raging as protests about law enforcement and the police shooting of the black teenager Michael Brown have turned violent:

At many of the protests, only one side had weapons. Peaceful demonstrations, with people holding up their hands – just as Brown is said to have done – have been met with tear gas and pepper spray. Journalists have been attacked and arrested. Amnesty International has sent observers.

For white Americans in sleepy university towns, life goes on as normal. The streets are clean and there are still bagels for breakfast. For everyone else, the jig is up. Social media is making all sorts of convenient fictions impossible to sustain. It remains to be seen if the idea of America as a just and mighty world policeman can survive the internet age – and what the consequences will be if it can’t.

Peter Wilby’s First Thoughts: the BBC is on a Cliff edge