Where did the £372bn that the British government has spent on the pandemic so far come from? There are three possible answers. The first, and most optimistic, is that it was not real money: it was created by the government, at no real cost to the economy, and it won’t be repaid by the belt-tightening of austerity. The ­second, pessimistic view is that the money was as real as any other, and that we will be burdened by the cost of the pandemic for many years to come. The third view is that we just don’t know.

Which of these views prevails will have profound political consequences. If either of the first two answers is shown to be correct, it could prove costly for the Conservatives at the next election, though in truth this is unlikely, given the strength of their lead in the polls; the third may entrench Tory power for another decade.

It is not hard to see why the money the UK has spent on the pandemic response seems unreal. Boris Johnson’s government borrowed an extra £299bn to get us through the last fiscal year. At the same time, the Bank of England created £340bn of extra money under its quantitative easing (QE) programme, in order to meet its 2 per cent inflation target and prevent the collapse of financial markets. It spent the money on buying safe financial assets from financial ­institutions, and by coincidence, the lion’s share – £330bn – went on buying government bonds.

This outcome gives credence to an unorthodox idea: that the money created in QE is available for public spending. For decades, Conservative economic policy has been based on supposedly hard truths about money. “There is no such thing as public money,” as Margaret Thatcher put it. “There is only taxpayers’ money.”

But the remarkable money creation of the last year is not so distant from what Jeremy Corbyn called “the People’s Quantitative Easing” in his 2015 leadership campaign. This was based on the idea that governments should use money created by central banks to fund public spending without worrying about inflation, which can always be stopped by raising taxes, especially on businesses. Proponents of this view call it Modern ­Monetary Theory (MMT). Conservatives call it the magic money tree.

This creates a conundrum for the Conservatives. If they maintain their conventional view of economics, they will need to impose a new period of austerity to pay for the pandemic. But if MMT proves to be true, they will face an opposition able to offer a much more ambitious and fully costed spending programme.

The question of whether QE represents a new long-term source of spending ­money for the government, or whether the old fiscal rules of tax-and-spend continue to hold true, will ultimately be answered by inflation. The extra money printed by the Bank of England over the past 15 months, combined with the £200bn of savings built up by households during the pandemic, has the potential to drive up prices across the economy. The Bank of England would have no choice but to react with higher interest rates, increasing the cost of government borrowing and making free money from QE impossible. Andy Haldane, the chief economist at the Bank of England, ­recently wrote in these pages of the risk of rising ­inflation in a post-Covid economy.

However, if there is only a short spike in inflation as people return to the shops before they go back to work – and we return to the same economic malaise of low growth and low inflation that persisted before the pandemic – then we may well see the emergence of a new public finance model.

[see also: Is the neoliberal era finally over?]

At this stage we simply don’t know what the future holds. This ambiguity creates a problem for Keir Starmer, and an opportunity for Rishi Sunak. Sunak is running a very different economy from that which George Osborne took over in 2010, and in a very different political climate. To Osborne, austerity was multi-purpose, satisfying Tory voters’ view of the economy while allowing him to ­defund local government in Labour strongholds and to cast New Labour, in the long tail of the financial crisis, as profligate and incompetent.

Sunak will not be able to reduce public spending in the same way, but the ambiguity of the challenge catches Starmer’s Labour on the wrong side of politics. Sunak can behave like a Modern Monetary Theorist to finance projects close to Conservative voters, new and old, such as levelling up and the Help to Buy property scheme, while maintaining an orthodox Tory line when criticising Labour’s spending plans. The 1 per cent pay rise for nurses in England is a case in point. Starmer can say that it is outrageously mean, but he can’t say where he would get the money for a more generous settlement.

Labour can never win this argument as long as the Tories pretend there is a limit on public spending that does not really exist. The priority for the opposition is to understand the scope for government spending without creating inflation; to grasp the opportunity the pandemic has created for a new approach to public finances. Arguably, the greater opportunity here is for Labour, because to win this argument would mean a change not only in public spending, but in how the UK addresses another of its most pertinent crises: inequality.

Quantitative easing is supposed to have an impact on consumer price inflation, but its main impact is in bidding up the price of financial assets. Since the Bank of England introduced its latest QE programme on 19 March 2020, it has created money equal to around 18 per cent of UK GDP. During this time, the FTSE 100 share index has risen by 35 per cent and UK house prices have risen by 8.9 per cent, but consumer price inflation has only edged upwards from 1.5 per cent to 2.1 per cent. This flow of money into investment assets has greatly increased inequality, because the wealthiest 10 per cent of the population own 45 per cent of the country’s assets. Those who already had the most have profited the most.

This increase in inequality created by asset price inflation has become systemic, because the financial markets have become addicted to QE. Central ­bankers are so afraid of a repeat of the banking system collapse that followed the Wall Street crash of 1929, that they have found themselves intervening to provide cheap money for the financial markets every time markets fall by 20 per cent (an intervention known as the “Greenspan Put”, after former Federal Reserve chair Alan Greenspan). 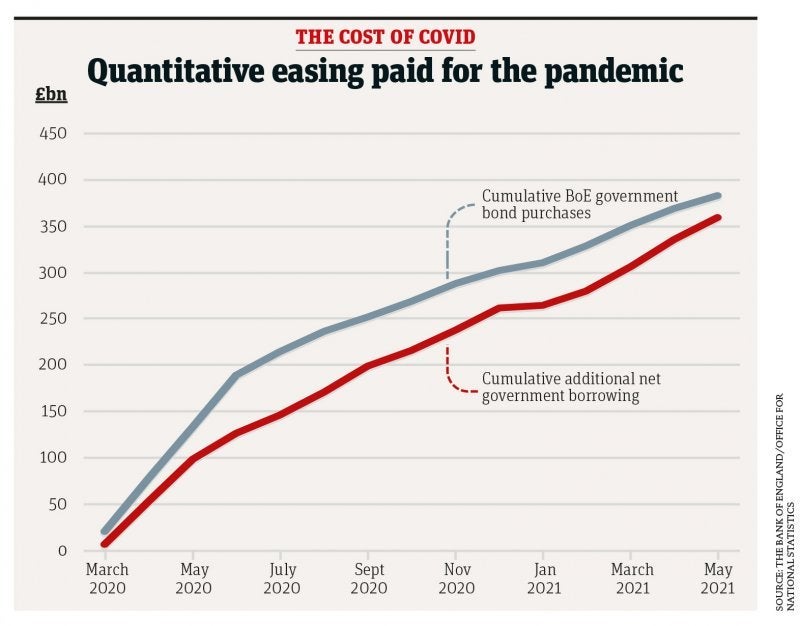 Until the 2008 global financial crisis, that meant reducing interest rates, but since then interest rates have been close to zero and QE has been considered the only option. The downside of this approach is that the cheap money from the last bailout helps to inflate the next bubble, which in turn bursts and means even cheaper money is then needed to stave off systemic collapse.

The problem of inflating the next bubble is made worse by the fact that central banks have no responsibility to intervene if asset prices are seen to rise too quickly. This means there is only one way that QE can go. With each turn of the business cycle, the economy is likely to step into a deeper dependence on money created by the Bank of England, and each turn of the business cycle is likely to make inequality in Britain worse.

Labour’s great missed opportunity in 2009 was the failure to recognise the possibilities that QE represented, and to devise policy that matched money creation by the Bank of England with additional government spending over the business cycle. If this had been recognised at the time, recent political history would have been very different.

But this opportunity still exists. If Labour can establish the controversial – but ­increasingly obvious – point that the ­government and the Bank of England are not, in practice, truly independent of one another, it can create policy that counterbalances the increase in inequality caused by QE by ­creating jobs on the public payroll, and it could make QE a more effective tool at addressing weak demand in the consumer economy. To do so would also be prudent, in that it would not entail a net increase in government borrowing. And it would be electorally effective: the ­Conservatives would be robbed of the argument that Labour’s plans were unaffordable.

The catch is that this model only works if the government acts to hold down inflation. There are three specific policies that could achieve this end. The first is investment in digital infrastructure to improve productivity: this means that workers can be paid more without causing inflation. The second is investment in green infrastructure, so that Britain becomes less vulnerable to inflation caused by rising input costs.

The third strategy is internationalism. Bringing China into the Western supply chain brought 20 years of inflation-free growth. Adding South Asia and Africa to Western supply chains could bring another 50 years. International trade has facilitated QE by keeping inflation at bay. Using QE to finance public spending therefore ­redistributes one of the benefits of globalisation such that UK workers have something to gain from open borders.

Globalisation has made the City of ­London extraordinarily profitable while creating a sense that much of the rest of the country was being left behind. There has been a growing consensus over recent times that allowing this to ­happen was a serious mistake, but no one has yet found an alternative. Using the money created to stabilise the financial markets to improve public infrastructure and services is surely that alternative.

It will entail a much bigger public payroll and more government involvement in the economy over time. Some might see it as the end of free-market capitalism, but the dependence on repeated bailouts from the Bank of England is a system that constrains capitalism. The financial markets have brought this situation upon themselves. They sold the rope on which they will hang.

Christopher Gasson is the publisher of Global Water Intelligence