Elections are not about how many votes you win. They are about how many more votes you win. At the general election, the Conservatives under Boris Johnson won only marginally more votes than under Theresa May in 2017 (an increase of 1.3 per cent). But Labour’s vote collapsed, plummeting from 40.0 to 32.1 per cent. In 2017, Jeremy Corbyn’s strength deprived May of a parliamentary majority. In 2019, his weakness handed Johnson the first comfortable Tory majority in 32 years.

This is why the decisions made by Labour over the next 10 weeks are vital. The next election will not be a referendum on Johnson. It will be a choice between Johnson and Labour’s leader. In the next five years, Johnson may be seen as ineffective, untrustworthy and scandal-ridden. But he will be re-elected if Labour’s leader is less appealing.

For almost a century, British elections have been a contest between the same two parties and their leaders. The UK did not elect Margaret Thatcher or Tony Blair outright. They chose Thatcher over Jim Callaghan, Michael Foot and Neil Kinnock; and Blair over John Major, William Hague and Michael Howard. For both Thatcher and Blair, their strongest opponent was their first – a serving prime minister. But they each faced weak oppositions during their decade in power. If Labour elect an inadequate leader, as they tend to do, and stick with them until the next election, as they almost always do, then Johnson will be handed a similarly free ride.

The next few weeks may determine the next decade. Three months after losing the 2010 general election, Labour arguably lost the 2015 election when they chose Ed Miliband as their leader. In 2015, they chose Corbyn, gifting the Tories another half decade of seemingly unelectable opposition. In March – the scheduled date for the end of the leadership contest – they may repeat the favour yet again. 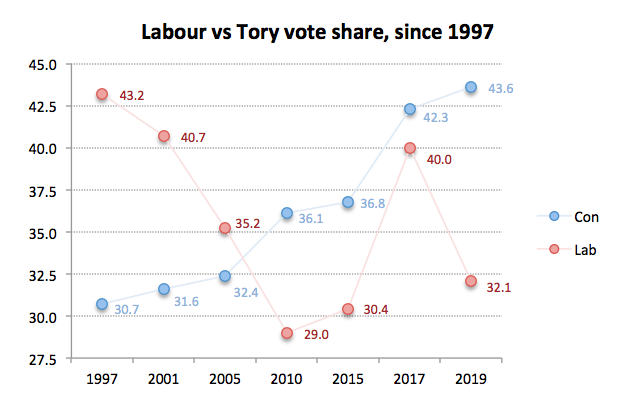 Labour frequently fail to pick a winning leader. Since 1951, the party has allowed ten candidates to fight an election. Only two of them have won: Harold Wilson and Blair. Eight have failed. If the party was funded by its ability to pick leaders, it would be insolvent. In contrast, eight of the 12 Conservative leaders since Churchill have won an election.

Yet Labour has shown no interest in reforming the way it picks its leader. If anything, the process has been weakened. After rushing to pick Miliband and Corbyn within three months of defeat in 2010 and 2015, they have now shortened the timetable even further. One plausible candidate, shadow education secretary Angela Rayner, has already stood aside to give shadow business secretary Rebecca Long Bailey, the Corbynite successor, a clear path to power. A defeated leadership are trying to anoint a continuity candidate after leading Labour to their worst result in 84 years. 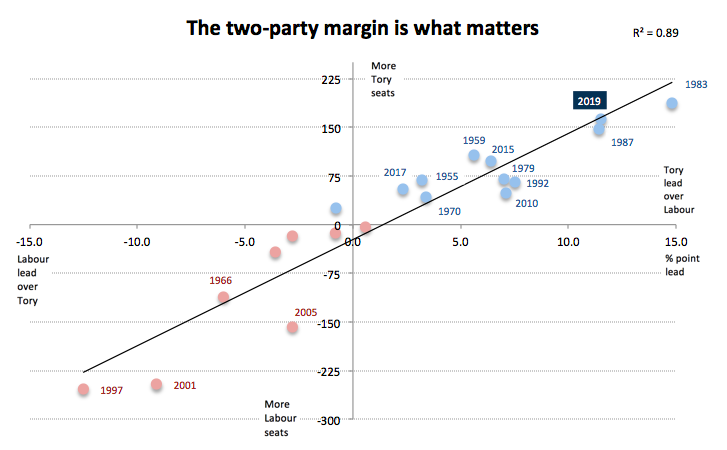 But what of a new third party – could that be the story of the next decade? Almost certainly not. The last time a third party displaced the long-standing opposition was in 1922, when Labour eclipsed the Liberals. That shift was decades in the making, and the result of both the Industrial Revolution and the First World War.

Labour was a social movement, whose founding leader, Keir Hardie, was first elected to parliament in 1892, 30 years before Labour’s ascent. It took a generation for the party to unite the many left-wing groups who sought to represent the working class. Labour then held power for just three years between 1922 and 1945. It took another world war for the party to govern with real power under Clement Attlee, 53 years after Hardie won his seat. 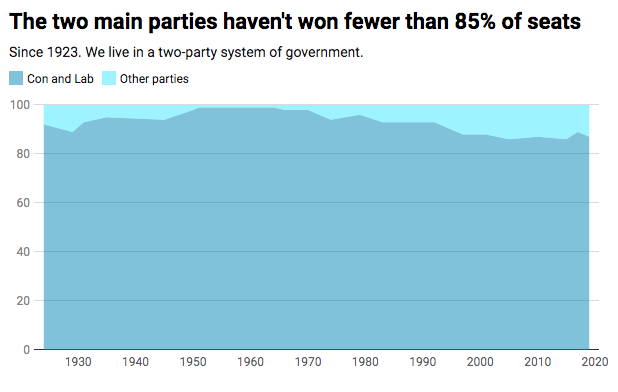 A long-established alternative route to political power in Britain is entryism. Unlike the rise of third parties – a once-in-a-century event – entryism happens all the time. It has happened to both major parties in the past decade: Arron Banks-led Brexiteers have infiltrated local Tory parties, and the hard left have taken over Labour’s National Executive Committee. Most party leaders have come to power after an internal revolution. New Labour and the “Cameroons” were once-small factions that won control of their parties, and then won the country.

Now Dominic Cummings has won, 17 years after his short-lived stint as Iain Duncan Smith’s director of strategy in 2002. Duncan Smith was the wrong leader, and was deposed before he fought an election. In the absence of an obvious successor, the Tories replaced him with the similarly inadequate Howard. Labour may now face the same dilemma: perhaps a Long Bailey leadership can be averted, but will the alternative be any better than Howard?