Not since the election held in December 1910 was dominated by the Irish Question and by the status of the House of Lords, has a British poll had such a major bearing upon two seismic constitutional questions at once. The current election will do much to determine whether the UK leaves the EU, and, the timetable by which it does so – if the Conservatives are able to form a government. It is also the “future of the Union” election, with its result bound to affect whether the UK will continue to exist in its present form.

In Northern Ireland, Scotland and Wales, domestic constitutional questions are vital ingredients in the campaign, and these sometimes clash with the politics of Brexit. If you are a Scottish Conservative voter who wants to Remain in the EU and opposes independence, you could well face a tough choice about which of the unions you prioritise when deciding how to vote.

But in England the domestic constitutional drama figures far less. All the questions about devolution, national identity and governance, which are staple themes elsewhere, are notable by their absence in the campaign in England. In part this is because there are plenty of other major issues competing for attention, aside from Brexit itself. Yet still it is quite remarkable that the English appear so detached from the likelihood that the territorial integrity of the state in which they are the largest partner faces mortal danger, especially given the SNP’s commitment to making a formal request for a second independence referendum, and the growing possibility of a border poll in Northern Ireland. Should Johnson win a majority on 12 December, the stage is set for a major confrontation between his administration and the Scottish government.

Even if British politics has reverted to the default assumption that the English care only for bread-and-butter issues, like health and the economy (Brexit aside, of course), it is a mistake to assume that the English are indifferent to the questions being debated so loudly everywhere else in the UK. An appraisal of the national sensibility and political world-view of England’s multitudes is imperative at a point when a good deal of opinion has fallen for a caricature of chauvinistic nationalism sweeping across the English heartland.

In fact, changes to the English psyche of a more subtle, contradictory and far-reaching kind have been under way for some time. Grasping these is increasingly important because the UK’s future will be determined not just by the decisions of voters in Northern Ireland and Scotland, but also by how the English, and their political representatives, respond to them. In fits and starts over the last three decades the compound of mutual tolerance and English indifference upon which the British system is built has begun to dissipate.

A growing sense of grievance about who benefits from the union, and England’s place within it, became intertwined with a range of other discontents from the mid-2000s. Some of these grumbles were age-old, such as the question of how funding is dispersed across the kingdom and whether the representatives of the smaller nations can hold too much sway over English affairs.

Over time, a majority of the English have come to believe that in the wake of devolution their own national community needs more protection and greater recognition within the British system of authority and governance – a desire that is extremely hard to meet in institutional terms. The Conservative Party did introduce a baroque set of changes to the House of Commons governing rules, a system known as “English votes for English laws”, after the Scottish referendum in 2014. But this remains invisible to people outside Westminster and barely understood by most within it. The majority in the English heartland paid little heed to the establishment of devolution elsewhere, and Northern Ireland receded markedly in the English imagination once the Troubles abated. Both the media and political establishments in London put Northern Ireland out of their mind in the wake of the Good Friday Agreement of 1998.

But the English were becoming more interested in themselves. A new focus upon what being English now meant, and whether its constituent traditions were being eroded by the twin forces of globalisation and European integration, marked the onset of a second public moment of Englishness – just over a century on from the late 19th century folk revivalism that accompanied another period of technological and economic transformation. Some pundits and politicians began to detect a political resonance to this new, and old, Englishness – the “forbidden identity”, according to Roger Scruton, which was disavowed by the liberal political authorities and politicians busy promoting a civic and multicultural Britain.

The forbidding that Scruton chafed against was evidently not that effective, as English symbolism achieved mainstream commercial and cultural status. The flag of Saint George fluttered in a thousand pub gardens, decorated numerous coffee mugs in offices and adorned T-shirts across the land from the 1996 European Championships onwards. However, at some point after 2010 the English mood changed, becoming sourer and more internally divided. Many polls showed that those who identified most strongly as English in their sense of national identity were also keenest on the idea of the UK leaving the EU.

In London, and a few other large cities, a very different pattern was visible. Britishness became a much more popular badge of nationality, and it is here that the Remain cause has found many of its strongest champions.

These divergent strands of patriotism are the effects, not the causes, of deeper shifts in mindset and outlook. And despite the many claims about English pathologies that inform our polarised discourse on Brexit, we remain largely ignorant about how much these national identities matter to different groups of people, whether they drive or reflect political values, and how they sit within the assortment of place-based, and other, identities that all of us juggle.

There are, however, signs that the English are starting to engage with these domestic constitutional issues, jolted out of their traditional indifference by the Scottish referendum and the forcible reminder of Northern Ireland’s unique position given by debates about the Irish backstop. But a marked ambivalence characterises this re-engagement. Polling suggests that people here, as elsewhere in Britain, tend to see the UK as a union of consenting partners, with each having the right to secede should they wish to do so.

But a growing number of English people also feel that the democratic rights afforded by devolution have created a deeply unbalanced system, which reflects an ingrained tendency for the state to favour other national minorities. And this reservation has fed into a much wider mood of disenfranchisement.

“Why do we never get a vote?” and “When are we going to be consulted?” were the questions typically posed by English audiences in the course of the Scottish referendum campaign. In June 2016 they got their chance to vote in the Brexit referendum – on a different, but not unrelated, issue, which also touched on deep questions of identity, self-government and shared sovereignty. 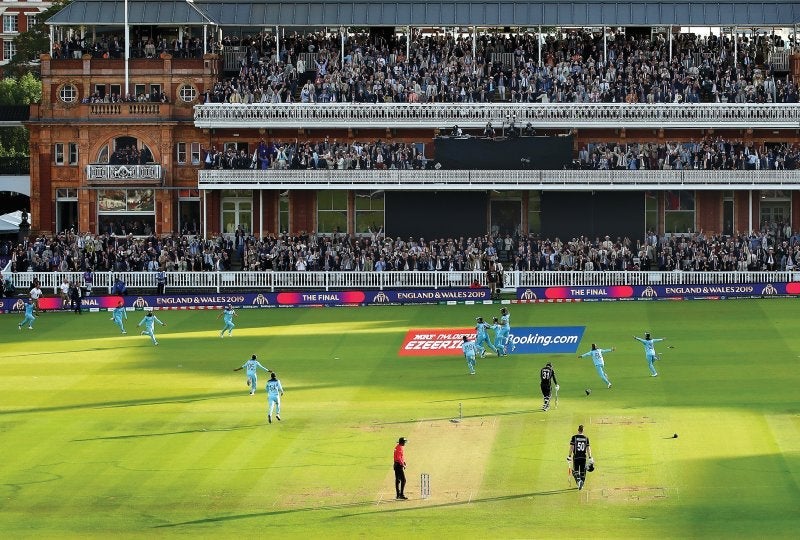 Team spirit: the end of the cricket World Cup final between England and New Zealand, 14 July

In the election campaign two very divergent governance propositions are on offer, neither of which are likely to address this stirring mood in a meaningful way. Labour has proposed investing heavily in a programme to bolster the northern regional interest. These meaty spending pledges are accompanied by a commitment to a model of regional devolution that carries echoes of New Labour’s failed efforts to introduce regional assembly government in England. On the sensitive questions of England’s democratic deficit, and what kind of constitutional order the UK needs to develop, the party has little to say.

The Tories, meanwhile, offer a new brand of English-centred unionism. This involves a more muscular and assertive demonstration of the value of Great Britain, and reflects a seam of thinking associated with Michael Gove and the think tank Policy Exchange. Its abiding aim is to rectify the deficiencies of Labour’s centrifugal devolution model and to make the Conservatives the leading force within unionist politics across Britain. This project displays some sense of the need to address English disenchantment – with extra funding promised for some of its poorest towns – but it faces the major challenge of selling pan-British unionism to three nations in England, Scotland and Wales which are, in key respects, pulling further apart – a process bound to be accentuated by Brexit.

Which of these projects will come to the fore depends on the election result, and other political contingencies besides. The coming years will be made even more uncertain by the question of how English opinion responds to the prospects of Irish unification and Scottish secession, both of which are likely to move into view as real possibilities in the next few months.

The Conservative parliamentary party’s support for Boris Johnson’s withdrawal agreement, which places the six counties of Northern Ireland within and without the EU’s customs union, says much about the priority that Brexit has assumed for many Conservatives, and the difficulty of balancing it against other conservative instincts. It also opens up a pathway towards greater disengagement from Ulster by the British state at a moment when support for unification with the Republic is rising. The contrast between the British unionism that prevails in today’s Conservative Party, and the stance of its Edwardian predecessor towards Irish Home Rule and Northern Ireland is striking. For many Tories back then, opposition to any form of Irish self-government was a vital principle, reflecting an underpinning belief in the unitary character of the United Kingdom, and Ireland’s place within it

The end of the Anglo-Scottish union would be felt much more fundamentally, and the Conservatives will fight hard to avoid this outcome. But whether the Anglo-centred unionism that Boris Johnson champions is a useful weapon in this fight, or more likely to inflame rather than calm Scottish opinion, remains to be seen. And if Labour forms a government, with SNP support, the prospects of a second independence referendum would be very high indeed, even as Brexit becomes less likely.

As these twin crises impact upon British politics, the party system that has buttressed the union is coming under the most intense pressure. This process began with the Scottish Labour Party’s collapse, and has continued as the Scottish and Welsh Labour parties become ever more disgruntled with the approach of their UK counterparts. The Corbynista mantra that class solidarity trumps the politics of nationhood looks increasingly ill-suited to the constitutional moment.

This divide is apparent in the Tory party too, where tensions have emerged between the Johnson government and the approach taken by the party in Scotland – with Ruth Davidson’s resignation in part reflecting this deepening rift.

If over the next two or three decades Ireland reunites and the Anglo-Scottish union breaks, we will have come full circle back to the 16th century, with Wales uneasily, and resentfully, incorporated into a system of English governance. Welsh politics would very likely develop a stronger pro-independence orientation, a trend that is already discernible as Plaid Cymru’s leadership talks more boldly about secession, and several senior Labour figures have declared themselves to be “indy-curious”.

For England, the coming years may feel like Groundhog Day, as successive constitutional crises follow hard upon each other. Long-avoided questions about what kind of nation England is, what kind of political community it wants to be, and what kind of union it is able and willing to share with others, have moved inexorably into the heart of domestic politics.