It happened. Despite everything, it actually happened. Parliament may have declined to break for recess, Brexit may be weeks away, and Tories remain about as welcome in Manchester as an outbreak of norovirus in a branch of Dishoom – but nonetheless, despite all these hurdles, several thousand Conservatives gathered in the city centre to talk about their and our future, on the optimistic assumption that any of us have one.

I was there for two days, because I know how to have fun, so here’s everything I learned from the experience.

The conference app says more than it means to

Check out the image that greets you when you log into the Conservative Party conference app. 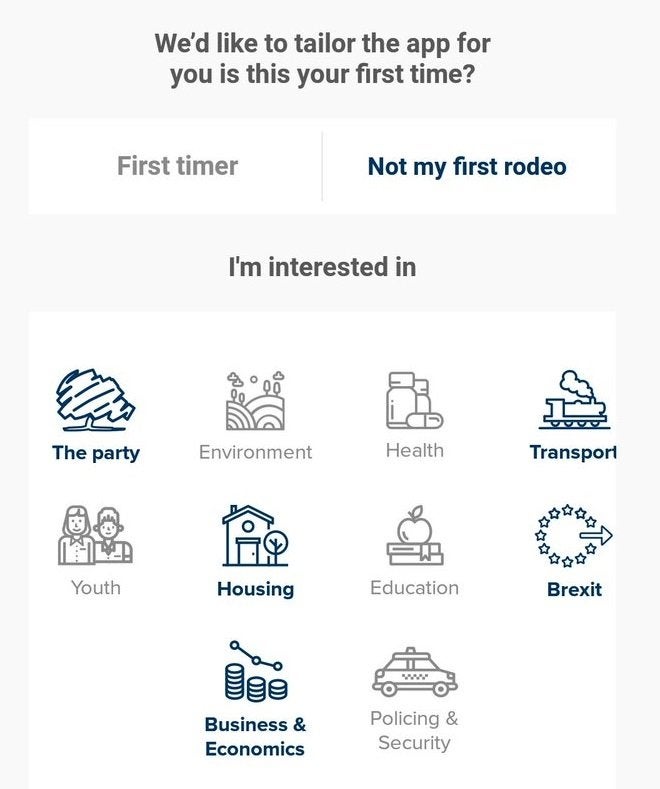 Three things strike me about this. One is that it uses the appalling phrase “not my first rodeo” which, given that we’re describing the Conservative Party Conference here, oh god. Another is that housing is in there as a major policy area. I doubt that would have been true ten or even five years ago.

But my favourite is that the line on the “Business & Economics” icon points downwards. To represent its economic policies, the Conservative Party has chosen a tiny graph charting decline. This is commendably honest, but it is not the message the party has traditionally sought to communicate.

The Tory message is clear, but also really not

Outside the Manchester Central Convention Centre there hangs an enormous banner with the words, “Get Brexit Done”. There are others inside the hall, and, just in case you were still a bit vague about the message of the week, the opening speeches all ended with it, too. Even a panel about the Northern Powerhouse – still a thing, honest – included the words “get Brexit done”, like it was punctuation, but punctuation at which, bafflingly, the audience would automatically cheer.

There were other banners offering other campaign slogans (“Invest in our schools”, “Invest in our police”) – but for some reason, these weren’t quite so prominent in anyone’s speeches. It takes quite some nerve to make the main promise of your conference a promise to deliver something you’ve been aggressively failing to deliver for the past six months because a lot of your side won’t vote for it. Perhaps this is a Sir Humphrey Appleby thing, and by putting it in the headline they hope nobody will bother reading the text.

There were two rather more unexpected messages I heard multiple times at the conference. One was the plea that the government will change the law to give renters the automatic right to keep a pet. The logic here is that Not Being Able To Have A Dog Because They Can’t Afford A House is one of those things which annoys younger voters a lot more than older ones realise. Labour already has a policy on this – and nicking that is a lot easier than actually, y’know, solving the housing crisis.

So perhaps introducing a right to a pet, even as landlords whine about it, is something that’d soothe the Tory discomfort with younger voters. Could happen, I guess? After all, Theresa May’s support for fox hunting is one of the things often cited as costing her votes in 2017.

…but a lot of them hate Tories

But there’s another point that came up in discussion of why younger voters – let’s be honest, it’s the under-50s not the under-25s – aren’t voting Tory, as if the decade of lost wage growth, collapsing home ownership, ballooning student debt, decay of the public realm and the laser-like focus on policies that improve the lot of rich old people at the expense of everybody else wasn’t enough.

I heard two different Tory MPs – Alberto Costa, Neil O’Brien – tell fringes that the party’s lack of appeal to younger voters actually overlaps with its lack of appeal to ethnic minority voters: younger Britons are simply more diverse than older ones. If you’re a Tory, the good news here is that this makes it slightly easier to solve: detoxify the party for one of those groups and you’ve gone a long way to solving both problems.

The bad news, of course, is that, as noted, the current government is pursuing a bunch of policies targeted entirely on old white people and thus almost perfectly designed to alienate everybody else, so it probably isn’t going to solve either.

Two entirely anecdotal observations: it felt very quiet, and there wasn’t any food.

Normally at conference, every fringe meeting will offer the traditional beige buffet, hot drinks and, after about 5pm, booze in an attempt to pull in the punters. And normally, the bars of the hotels surrounding the conference centre will be rammed late into the night, as people stay up bafflingly late out of an entirely misplaced sense that if they go to bed they might miss something.

None of that really seemed to happen this week. The buffets were largely absent; the bars busy, but not so busy that you couldn’t easily get served. Someone responsible for the door list on an invite-only party told me they’d been much more liberal than usual this year; so many people had failed to show that there didn’t seem any point in being hardline about it.

The obvious explanation here is that the conference nearly didn’t happen at all, thanks to the Supreme Court, so large numbers never left Westminster. But I wonder if there’s more to it than this, as the Labour Party Conference felt quiet, too (though the buffets, at least, were plentiful). The Lib Dems’s conference, meanwhile, which takes place in a smaller conference centre, was unexpectedly rammed, and if you didn’t get to the fringes ten minutes early you might as well not bother.

None of this is to say that we’re on course for a Lib Dem majority (because, lol). But, while anecdote isn’t data, it did feel like maybe one of the three parties was outperforming expectations and the other two were underperforming them.

The oddest thing about this year’s Tory conference, though, took me a while to pin down. Every speech, every presentation I heard, was premised on the assumption that the party had years in government ahead of it. All it had to do was to get Brexit done, and then it could go back to doing, well, whatever else it’s hoping to do to the country. At no point did I spot anyone even glance at the possibility it might soon all be over.

But it might be. There is a not insignificant chance that this government, which has, in various disguises, held office for nine and a half years – a decent whack for any government – might be out of the door in a matter of weeks. It doesn’t have a majority, and an election is probably coming. These could be the last days of Rome.

Then again – perhaps they aren’t. Perhaps Brexit will be delivered (again; lol), and the election won, and we’re stuck with this lot for another five years or more. Nonetheless, the refusal to countenance the possibility that things are about to go horribly, electorally wrong feels well over the line into complacency. This isn’t a party that is confident about its prospects. This is a party that has let slip this plane of mundane reality.

Then again, this article is headline “things I learned” and if I’m honest we all already knew that one. Oh well, never mind. Send tweet.