As soon as Boris Johnson became leader of the Conservative Party, and Dominic Cummings (he of Vote Leave campaign fame) was appointed his senior adviser, the Conservatives’ official Facebook page started pumping out hundreds of new ads.

At time of writing there are over 270 ads running from the page, all with the tiniest of variations and messaging tweaks: blue vs red banners, different feature images, call-to-action buttons on images or not, group shots vs close-ups of Johnson.

The ads themselves switch between asking what people’s priorities are, and a video of Boris Johnson hammering home his leadership election messages: deliver Brexit, unite the country, and defeat Corbyn.

Web-savvy, social media-optimised digital campaigning is now a standard part of political campaigning. Yet it is striking that less than a day after he became PM, the Johnson team has launched its online election campaign, and using the tactics that Cummings was so adept at deploying during the Brexit referendum. 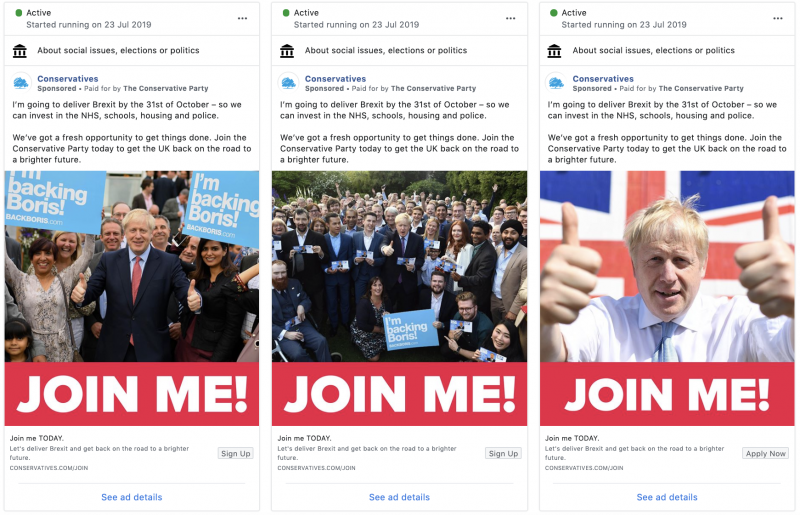 The party is not spending huge amounts of money right now but that’s not the point. It will be testing what message works with what audience, building a picture of what its key audiences look like and how they interact online. It will be using the data from whoever engages with these ads to build custom audience segments for future ads.

You don’t even need to leave Facebook – you can be retargeted based on when you stopped watching one of the videos, or if you clicked to view the comments on an ad.

The Conservatives are hoovering up data at this stage. Even if Facebook users don’t engage in this way, “lookalike” audience segments can be created of other people who have similar behaviour online who can then be targeted.

All these ads lead to a new survey on the Conservative Party website asking your policy priorities and then for your postcode, full name and email. All the info you need to start building some really strong custom audiences for an upcoming election. 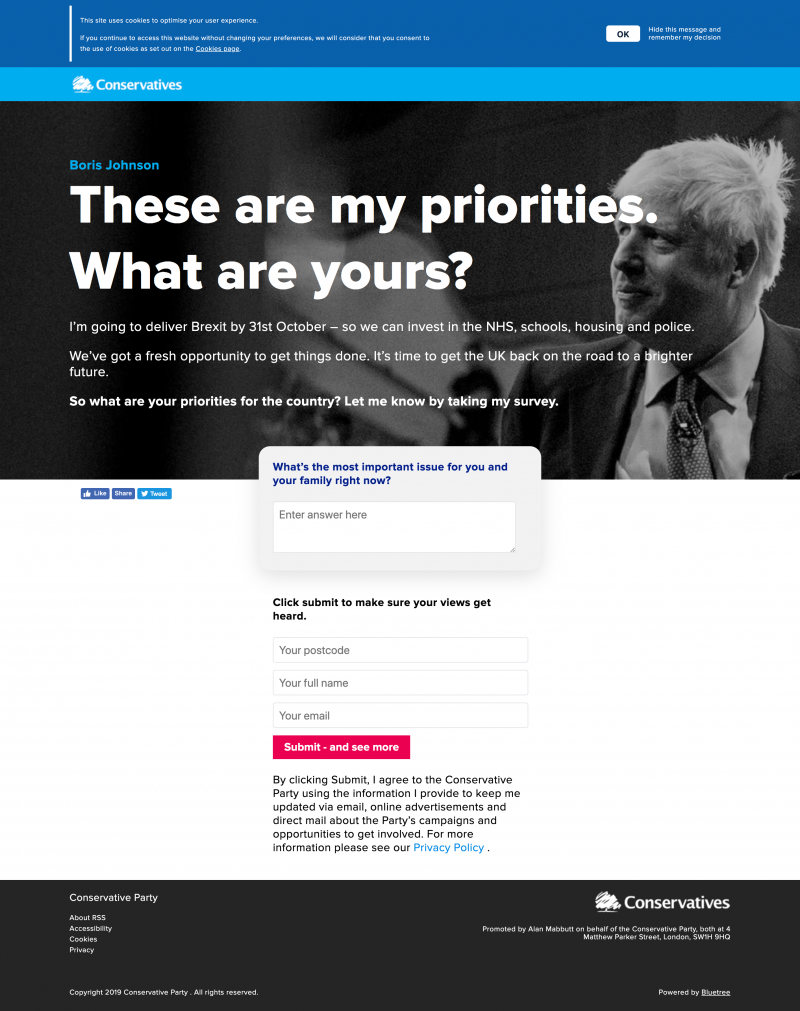 But you don’t need to enter your information to fall into another of its retargeting pools. The landing page includes retargeting pixels from Facebook, Google, Twitter and Hubspot meaning that you can be retargeted with ads on those networks based on your previous actions.

e prepared to be followed around the internet by Boris Johnson’s face if you engage with any of this content and fall into its target demographics, whether you submit the form or not.

This is a professional, well-constructed online operation of exactly the kind that Cummings ran at Vote Leave.

This barrage of digital advertising from team Johnson is likely just the beginning.

Tom Lillywhite is a digital strategist, founder of Pack and does digital for Keir Starmer MP.