Islamophobia is rife within the Conservative Party. Fourteen party members have been suspended today for Islamophobic Facebook comments, as uncovered by BuzzFeed. On the very same day, a council candidate in Harlow, Peter Lamb, resigned for racist comments, like his assertion in 2015 that “Islam is like alcoholism. The first step to recovery is admit you have a problem”, revealed on PoliticsHome.

These incidents came after the Tories suspended a Wellingborough Conservative councillor Martyn York last week over a Facebook group he moderated that contained racist and Islamophobic messages.

For some reason, this has led the Conservative MP Jacob Rees-Mogg – the subject of one of the offending Facebook groups, the “Jacob Rees-Mogg Supporters Group” – to champion his party’s action.

“Islamophobes have no place in the Tory party and it is encouraging that we have acted swiftly unlike the Socialists,” he tweeted: 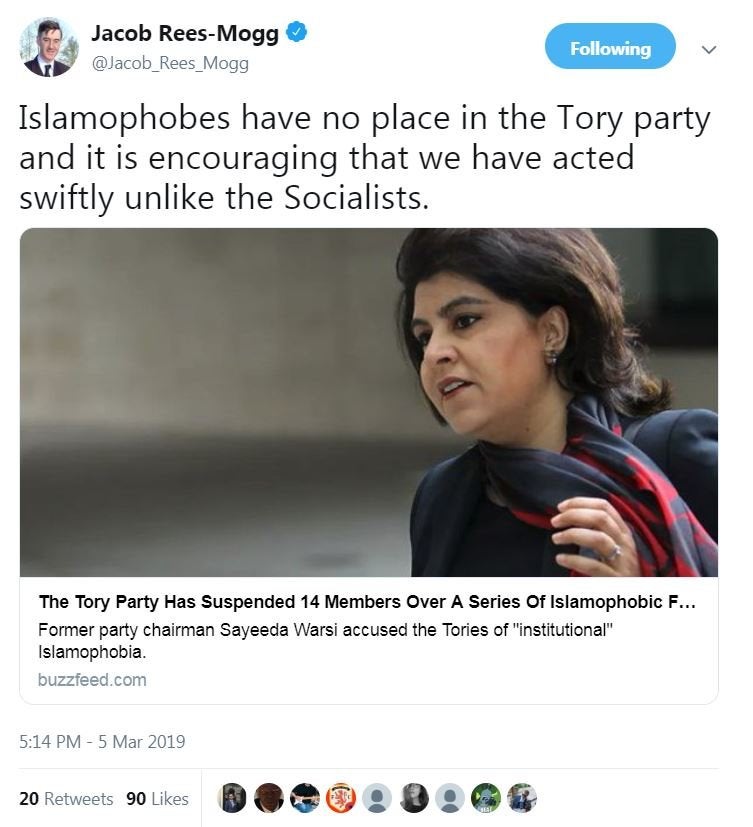 There are so many things wrong with this tweet that it’s difficult to know where to start.

First, Rees-Mogg links to the BuzzFeed report – apparently not realising that Conservative Campaign Headquarters (CCHQ) only took action when the website had contacted them about the comments it uncovered. So no, that’s not action – that’s getting caught.

Third, Rees-Mogg is simply wrong. Sayeeda Warsi, the Tory peer and former party chair who served as the first Muslim woman in cabinet in 2010-14, has been warning her party about its Islamophobia problem for years.

She resigned as foreign office minister from the cabinet in 2014 over what she called her party’s “morally indefensible” stance on Israel’s actions in Gaza, and had been warning about Islamophobia in Britain long before then – making headlines in 2011 by saying Islamophobia had “passed the dinner table test” in a speech to Leicester University as Conservative Party chair.

Since Warsi quit the cabinet, she has been able to speak more freely about the problem in her own party. Naming ministers and strategists, she accused the Conservative Party of making the political calculation not to crack down on the problem in a revealing book on Muslim Britain, The Enemy Within, published in 2017. She also called on the government to rethink its flawed anti-radicalisation Prevent programme.

In June last year, she warned that Islamophobia was “very widespread” in the party, and went “all the way to the top”.

Although Warsi told me at the time she had sent advance copies of her book to Theresa May, the then home secretary Amber Rudd and other ministers, nothing has changed in the party’s attitude towards the problem. Indeed, it has barely acknowledged it – other than to expel a few members when the press sniffed them out.

It allowed former London mayoral candidate Zac Goldsmith’s divide-and-rule election campaign in 2016, which attempted to whip up negativity about Muslims in other Asian areas of London, and only last year a Romford Conservatives campaign leaflet distributed in Havering was accused even by Tory figures of “racist signalling” (it referred to “Mayor Khan” and warned of the borough “resembling” neighbouring “inner-city” areas and “our cherished union jack flag being taken down”). It was later withdrawn.

No action has been taken by the party against Bob Blackman MP, who shared an Islamophobic post on his Facebook page last March, entitled “Muslim Somali sex gang say raping white British children ‘part of their culture’ ” (he later took it down, calling it an “error”), and was soon after found by Vice to be a member of far-right and Islamophobic Facebook groups (which he removed himself from, saying he was “completely unaware” of their content). He also has past form that has also been ignored by the party.

The Muslim Council of Britain officially called for an inquiry into Islamophobia in the Tory Party last May, citing a pattern of over ten Islamophobic occurrences from Tory candidates or representatives from 2018 alone – and its calls have gone unheeded, despite being renewed.

If this is “swift” action, perhaps Rees-Mogg needs to repair his pocket watch.