Theresa May’s former adviser and the world’s most amplified election loser Nick Timothy has urged the Prime Minister to follow Celtic queen Boudicca’s example, in his column for The Sun. Photoshopping the PM onto a statue of apparently the only woman in power men can think of (died c.AD 60), The Sun headlines the piece: “It’s your Boudicca moment, Theresa”. 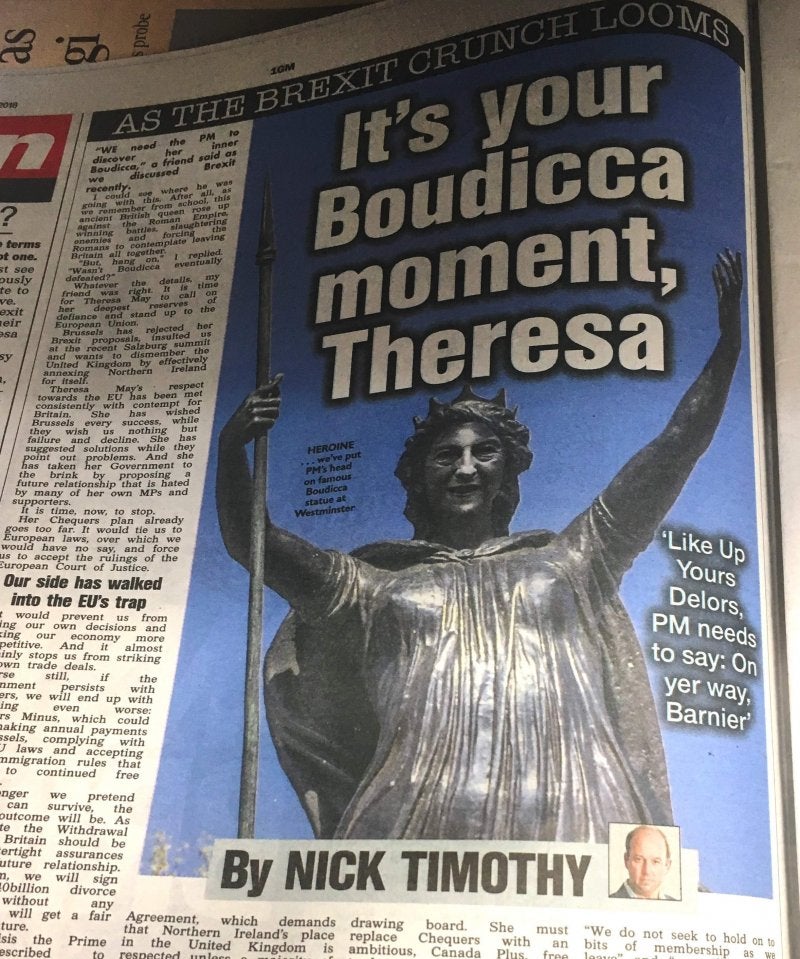 Quoting a friend who said the PM needs “to discover her inner Boudicca”, Timothy writes that “the ancient British queen rose up against the Roman Empire, winning battles, slaughtering enemies and forcing the Romans to contemplate leaving Britain all together”.

Note the word “contemplate”. While Timothy acknowledges that Boudicca was “eventually defeated”, he writes this off as an irrelevant aside – “whatever the details, my friend was right”.

In a devastating battle succumbing to Roman rule in Britain, Boudicca’s army was comprehensively defeated, with 80,000 killed, according to Roman historian Tacitus.

In the build-up to the battle, Londinium was burnt to the ground and all remaining inhabitants were killed.

Well, the town of Colchester – then the capital of Roman Britain.

4 She destroyed the commuter belt

Her warriors destroyed St Albans, of Hertfordshire – then known as Verulamium.

5 She was complacent about winning

So sure were the Britons that they’d win, their families – including women and children – were stationed in a crescent of wagons around the battle field to witness the expected overwhelming victory. They were massacred.

6 Her army was ill-equipped

Despite heavily outnumbering the Romans, Boudicca’s rebels weren’t equipped properly to do battle.

7 She took her own life

Boudicca poisoned herself after the defeat, according to Tacitus.

9 Actually this is a very good analogy for Brexit