“No honeytraps?!” In the first minute of giving evidence, Leave.EU leaders Arron Banks and Andy Wigmore were joking about the Department for Culture, Media and Sport committee chair gallivanting with Russians.

“No honeytraps!” Conservative MP Damian Collins, who is leading the committee’s inquiry into fake news, chuckled along about his hospitality visit to Chelsea FC (owned by Roman Abramovich): “I wasn’t offered Stalin’s vodka!” he professed. “Chelsea won 2-1, and that was the extent of the entertainment.”

When Collins called for the inquiry to start as it meant to go on, it clearly already had.

Nudging each other, gleefully grinning, waving at the press (“hi Carole!”) and mocking their inquisitors, Ukip donor Banks and his right-hand man, Leave.EU spin doctor Wigmore, gave Brexit Britain the inquiry it thoroughly deserves in the era of what The Economist’s Duncan Robinson has labelled “the banter heuristic”.

Like a pair of Kremlin-approved David Brents, the two men postured and Partridged their way through questioning from MPs about their Brexit campaigning – breezing through the Cambridge Analytica data harvesting scandal and sweeping aside claims of Russian connections.

Mostly, somehow, with the excuse that it was all just banter.

“We certainly weren’t afraid of leading journalists up the country path, the same with politicians,” Banks said. “I think you have to take a slight pinch of salt because we were running a campaign deliberately aimed at making fun of people, pushing them in a certain direction.”

Wigmore and Banks repeatedly confessed (well, boasted) that they’d messed with and wound up journalists and others, in order to make a splash with their campaign – hence any past exaggerated or provocative remarks about their clout.

“If I meet you for a glass of wine, there must be some dreadful conspiracy!” Banks shrugged.

“I’m an agent provocateur – not the underwear,” smiled Wigmore, claiming he was doing some boastful PR about the data Leave.EU had during the campaign. “My job is to provoke, it’s to spin stories.”

So did that include fake news, the MPs wanted to know.

“Parliament itself is the biggest source of fake news in the country,” Banks responded. “Straight after this hearing you’ll be at lunch with some Guardian journalist quaffing a glass of Chablis and spinning this how you want.”

A conspiracy over a glass of wine, you say?

Anyway, who cares about fake news versus reality? The lesson from the self-styled “bad boys of Brexit” is that facts didn’t preoccupy them during the campaign. “Winning an election isn’t about facts, it’s about emotion,” said Wigmore.

And, shortly after, when becoming increasingly frustrated by questions about his insurance companies – “I answered the question to Mrs Pow, Miss Pow… Rebecca!” – Banks refused to respond, instead snapping to the questioning MP:

“What is this? Are you the MP who got drunk in the House of Commons and harassed a woman and got drunk on a karaoke evening?”

No, just when we get to the Russia part.

Which proceeded in a similar vein.

Over the weekend, the Sunday Times and Observer revealed documents suggesting multiple meetings between Banks and Russian embassy officials and Russian businessmen ahead of the EU referendum.

Banks denied any Russian financial involvement in Leave.EU, but ahead of the hearing Collins stated that the public had a “right to know” about his relationship with Russia.

“We had a couple of issues in relation to bananas and sugars,” said Wigmore – who worked for the Belizean High Commission – to explain meetings with Russian officials. “I was trying to find investors to look at perhaps buying a banana farm that had got into trouble.”

So what was Banks getting out of this relationship?

“The first was the best,” added Wigmore, for the record.

Finally, an MP asked the million rouble question: Did you accept money from Russia?

And what about his meeting with the Russian ambassador?

“We got trolleyed, it was fantastic.”

Here began the final scene of what can only be described as a three-act farce. Wigmore produced a brown envelope labelled “Top Secret”, to giggles from the room, containing communications between Leave.EU and the US embassy. They did this to try and maintain a relationship with the US president’s team – after Banks had been labelled a Russian agent by an American think tank. 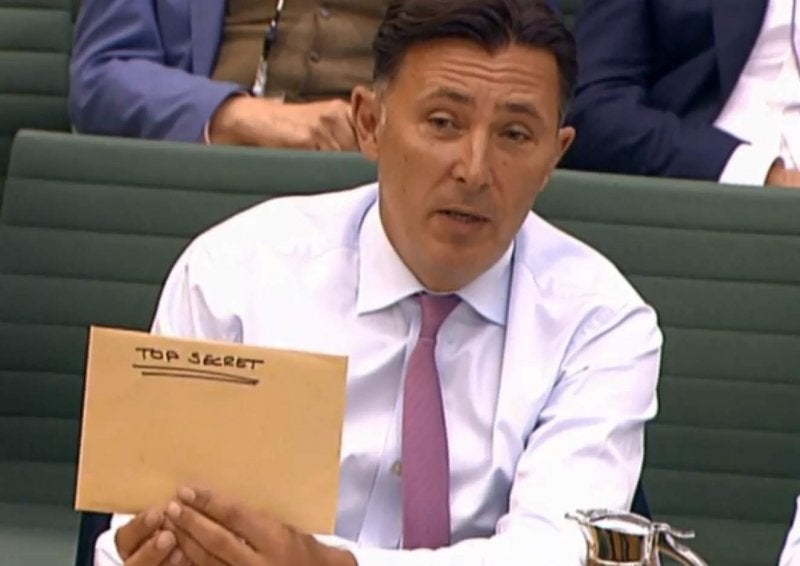 “It’s at that point that you start to take the mickey, start to think ‘this is absurd’, do what I did with journalists, because you think ‘how can they believe that?’” Wigmore said.

It seemed any tricky question about data, money or Russian influence could be batted away with this response: that the men had either been provocative and mischievous – or over-selling themselves.

“What’s the difference between provocative and lying?” one exasperated MP eventually asked Wigmore – who had called himself an “agent provocateur” twice by this stage.

“If your press man just told the truth, we wouldn’t be here!” remarked Collins.

“If we didn’t approach this with some sense of humour, we’d get locked up,” Banks quipped, when questioned why they felt it appropriate to mislead journalists and politicians.

After offering to sign a copy of Banks’ book for the MPs, The Bad Boys of Brexit (which they’d brought with them), the two men refused to answer any more questions – walking out for a lunch appointment.

“Actually, you can join us if you want?” Wigmore grinned at the stunned faces of the committee. “We’ll be in the House of Commons bar!”

Of course they will.