The poor old whining snowflakes at the Daily Mail have discovered that maybe it’s better to put the state above private companies after all.

They’ve run a ranty yet doleful lament on their front page about Britain’s “ruling class” (which they are definitely, definitely not part of, of course) showing its “hate” for “our country” by letting a Franco-Dutch firm make our post-Brexit blue passports:

“Today the Mail has a question for Britain’s ruling class: Why DO you hate our country, its history, culture and the people’s sense of identity?” 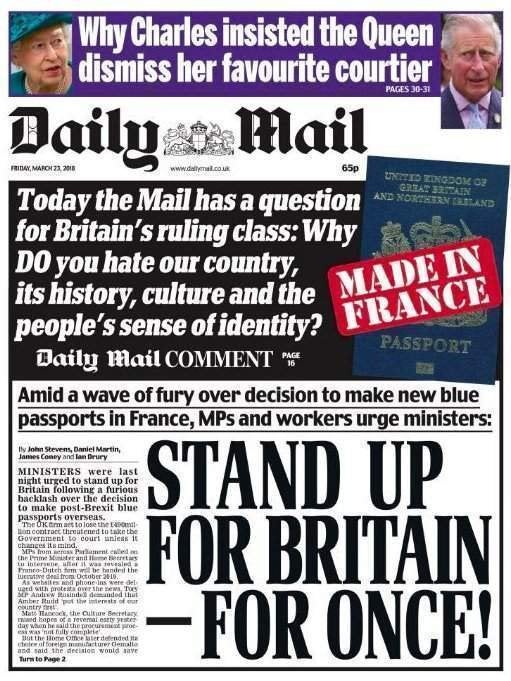 In a beautiful bit of irony, the £490m contract to make our grim new tickets to bigotry was awarded to Gemalto, a Franco-Dutch firm that beat the British-based De La Rue (lol) that also tried bidding for the contract.

The Mail’s complaint seems to be that the bloody Frogs shouldn’t be making our passports – the UK should be doing it instead. So, according to this logic, either the state should make them, or, to guarantee a private British firm winning the contract, the state should ignore free market forces?

Neither seem particularly in tune with the Mail’s usual preferences. Nor those of the Tory Brexiteers, for that matter.

Yes, this is part of European competition law – big public contracts like this have to be open to bids from across the EU. But right-wingers in this country don’t seem to mind when foreign companies run our railways (Greater Anglia, West Midlands and ScotRail franchises are majority-owned by the Dutch state company Abellio).

Looks like these over-sensitive social justice warriors want to have their cake and eat it. Political correctness gone mad.