Ahead of the Spring Statement next week, it is worth taking the long view of what might be going on in our economy.

In fact, it’s worth taking a very long view.

In the first century BC, the great Roman Republic endured various existential crises. With the breakdown of democracy, and a new period of Emperors, people started to hoard. From the Second Punic War to the dictatorship of Sulla and the invasion of Rome by Julius Caesar and his army, the people of Rome began to save, and hide, their valuables.

Imagine being a Roman, then. Your city, your nation, has been at war for years. But at the turn of the century things start to turn inwards. Buffeted by events, political failures feed through to the real economy: work is poorly paid, infrastructure programmes halt, suspicion and hostility towards outsiders rises, there is no strong leadership in the Senate, and the future feels uncertain.

Ancient historians marvel at the correlation between periods of instability and people burying their gold coins. It is awe-inspiring. You won’t find people predicting the collapse of the very fabric of their society – but you will find them burying their gold.

This graph from historian Peter Turchin tells the story: 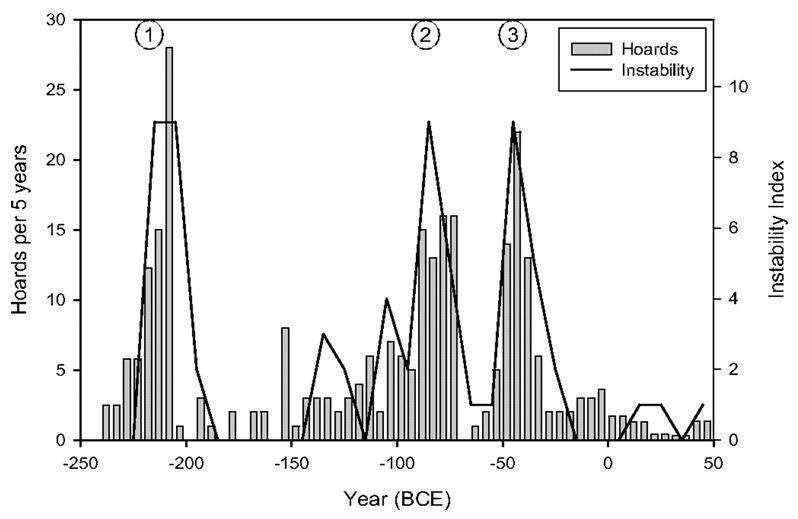 Back to Britain, today. Infrastructure projects are in peril. The National Audit Office announced last year that 16 of the Roads Investment Strategy projects are facing cancellation and 19 have been delayed until after 2020.

Since 2006, we have dropped five places, from 19th to 24th in the World Economic Forum infrastructure rankings.

Wages have stagnated. Hostility towards immigrants has marked our politics. Economic uncertainty is leading businesses to stall, and productivity growth has flat-lined.

Perhaps Britain, too, is burying its gold.

Only last week the government announced its “new” housing plan to address the lack of new building which has happened in recent years. But this is not a new housing shortage. There is a market for new housing, but developers are slow to respond. Businesses are cash rich, yet they are not investing. 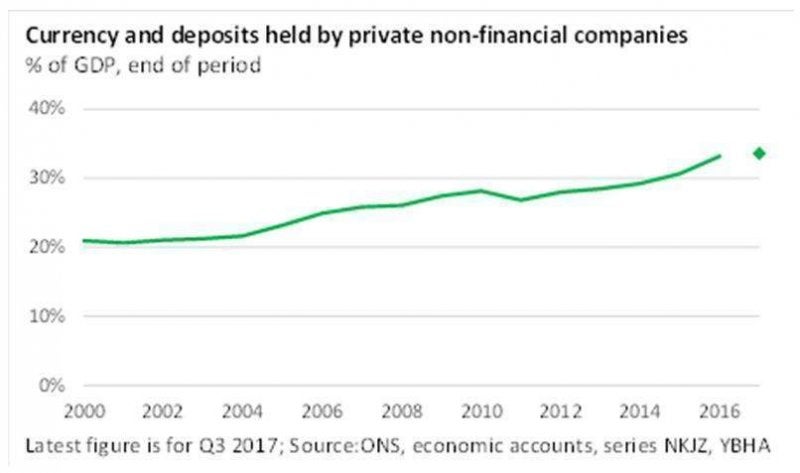 Compounding the pressure, our high streets lack the investment to meet competition from online challengers, and exchange rate changes are crippling many restaurant chains. This year, we have already seen the downfall of Toys R Us and Maplin, threats to House of Fraser and New Look, and the restaurant chains Prezzo, Chimichanga and Jamie’s Italian all struggling to stay above water.

And then there is the great divide in the public’s financial situation. Some British citizens are burying their cash into property if they possibly can. But many more people are struggling to save in any way. With wages stagnating, cost of housing high, and the price of goods increasing, too many don’t seem to have any spare cash.

The saving ratio – the percentage of income people have available to save – has decreased every quarter in the last year, according to the ONS. So, this cycle of decline continues: businesses can’t invest, people won’t spend, but can’t save. And the only people getting rich are those who own property in places with ever-inflating prices.

We might not literally be burying coins in the ground, but something is up.

Productivity has flat-lined since 2008. Each year the OBR has predicted the beginning of a return to pre-crash levels, and we have been repeatedly disappointed by the lack of an upturn. Meanwhile, workers have just taken on more hours, seeking to make up for low pay and increased costs.

But we continue to ask the wrong questions.

Conventional wisdom asks: how do we cut the deficit? How do we promote growth? How do we improve productivity? How do we get people to spend more money?

Perhaps it is time we should ask something else: what is happening in our country? What is this rainy day we are preparing for? Why are we burying our gold?

The answer, to me, seems obvious. Brexit. Twenty months have passed since the referendum, 12 since we triggered Article 50, and nine since the general election. But really, this has been going on since the 2015 election, when David Cameron’s Tories committed to holding the vote on our EU membership.

We are seeing businesses, government, and worst of all, individual prospects, frozen by Brexit. In the year following the referendum, UK growth fell from the highest in the G7 countries to the lowest, a quite remarkable descent.

No one knows what we are getting from Brexit, so who can plan for the future? How can any person, any business, or any government make a decision when the goalposts keep moving?

Just in the last week we have seen both Airbus and Vauxhall expressing concerns about their future in the UK, with business viability, and jobs at the latter, at risk because of Brexit.

Worse, there is no prospect of a solution. Each speech, each budget, each announcement, is fraught with the uncertainties of Brexit. The Prime Minister admitted as much in her most recent speech. The Chancellor has said it all the way along.

The actions of people and businesses are making it abundantly clear. But we just haven’t quite found a way to listen yet. How much worse must the uncertainty get, before our government finds a better course?

Our economy is stalling, and our country is crying out for help. We have all the economic indicators and measures telling us so, and all the institutions to protect us from the fate of Roman democracy. But we need to look at what the numbers are telling us, and look out for the needs of the many, not the few. Maybe the Romans can teach us something, after all.