In the summer of 2010, Lisa and Mark were driving a van through the mountains of Italy. Brought together by their love of nature, cycling and climbing, it was an idyllic holiday for the British couple.

Then, one day, Mark went for a cycle ride. While he was gone, Lisa opened the glove box of the van and began searching for her sunglasses. Instead, her hand enclosed on Mark’s passport. It was the first tug of the thread that has, seven years on, still not led her to the full truth. And with every tug, she would be forced to accept that more of the happiness she had experienced over the past few years was based on a lie.

“I have tortured myself with that for quite a few years,” Lisa (not her real name) tells me when I speak to her on the phone. “What did I miss? What should I have seen? Of course, I can see things now that are clear indicators, but it is so important for me to realise I didn’t have a chance.”

Mark was not the environmental campaigner he had pretended to be for the past seven years, but Mark Kennedy, a former undercover police officer with a wife and children in Ireland. Reporting by the Guardian journalists Rob Evans and Paul Lewis, and their follow up book, Undercover, documented how, from the late 1960s, police had been infiltrating protest groups. Their deceit extended not just to having relationships with women while undercover, but even having children with them. In Kennedy’s case, he grew his hair out, pierced his ears and moved to Nottingham, where he began hanging around cafes popular with activists and introducing himself as Mark Stone. As well as gaining a reputation as an effective organiser, Kennedy had at least two serious relationships – the second with Lisa lasted six years.

When the revelations emerged, there was widespread horror at the idea that women had been manipulated in such a way. But seven years on, the public inquiry is cloaked in secrecy (hearings are ongoing, and there was one on 5 February 2018). Since 2014, the police have fought attempts to release details, in particular the aliases the undercover police went by. These are crucial as far as the activists are concerned, because it is these names, not the officers’ real ones, that will identify police spies. Meanwhile, the women, and in some cases their children fathered by undercover officers, have had to live with the consequences.

Undercover describes the woman named as Lisa in this article as a well-connected and trusted activist. At the time of the book’s publication in 2013, she had not spoken about her experience. Five years on, she says she needed time to make sense of what had happened to her.

Kennedy pretended to his activist friends that he was a professional climber, while hinting at a shady but lucrative previous life smuggling drugs. He was a reliable driver, and a regular at protests, including one where he was beaten up by police. One of the challenges Lisa grappled with was accepting that she was not, as she initially felt, simply too stupid to notice. “He was a trained manipulator who had the whole weight of the state behind his lies,” she says. “He had fake passports. He wasn’t a normal liar who I should have spotted.”

Another reason Lisa had managed to overlook the little things was because the relationship was one of the happiest she’d ever experienced. “What I realise now is, because it was important for this cover, he was putting a lot of effort into being my ideal partner,” she says. “That is hard.” Another woman in a similar situation described it to her as having a partner without an ego. “It is hard to think what a normal relationship would be like that after that.” 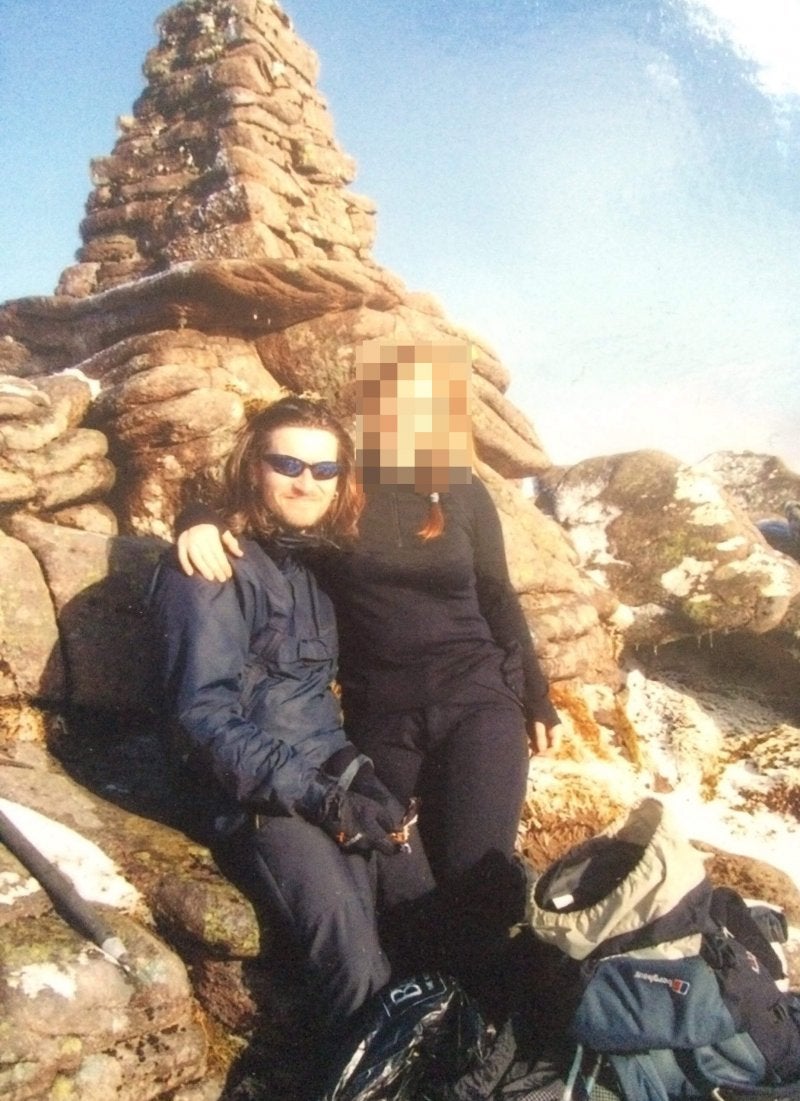 Lisa with Mark Kennedy, whom she knew as the environmental activist Mark Stone

I speak to Lisa in late December, shortly after the #metoo movement sweeps the world, when the words abuse and power seem to go hand in hand. In 2011, Kennedy told the Guardian there were “no lies” about his love for Lisa and that their relationship was “the realest thing I ever did”. In 2009, shortly after a raucous 40th birthday party with his activist friends, Kennedy’s handlers reassigned him to a desk job. He subsequently quit the police, joined a private security firm and returned to the activist scene – but crucially without the fake passport the police had previously provided for him.

How does Lisa understand the relationship, all these years on?  “I think it is something I will always wrestle with,” she responds. “I do want to believe he did feel in love with me, he said that he did, and I would like to think I could recognise genuine feelings.” Initially, she attributed the abusive nature of the relationship to his employers, but over time, her view has changed.

“I still think a lot of people were responsible for what happened to me and not the one person who I was in a relationship with,” she says. “However the feelings have faded and it is very, very obvious to me that there was a huge power imbalance in that situation.

“To put someone in a position that they were consenting to a relationship [that] if they had known all the facts they wouldn’t be consenting to – that is abusive.”

It is this power imbalance that continues to haunt Lisa, even after the hurt has waned. She is unnerved by the idea of backroom staff “observing my most private and intimate moments without my consent, reading my text messages”.

She also thinks about the wives of the police officers, inadvertently co-opted into the undercover world. According to Undercover, officers with wives or stable partners were preferred as undercover spies, because they were less likely to form emotional connections with the women they slept with (a whistleblower also described to The Guardian how potential spies were vetted by visits to the marital home). Their wives did not seem to merit similar consideration. “I think it is a total disregard for women’s lives,” Lisa says. She thinks about Kennedy’s children a lot, and what it was like to have “a dad part time”.

It was family that gave Kennedy away. Lisa had accepted Mark’s excuses for his absences (work), and explanations for why she had never been introduced to his family, although she once had an awkward conversation on the phone with a brother. “I realise now it was because his brother probably didn’t really want to speak to me. His brother wasn’t a police officer and was dragged into it.” When she opened his passport that day in July 2010, though, it was the discovery that he had a child listed that startled her. “People change their names for all kinds of reasons but people don’t have kids and don’t tell you about it.”

There were many more tugs of the thread to get to the truth. After discovering the passport, she confronted Mark; he claimed that in a past life he had been a drug runner, and cried for hours. They went on holiday again. It was only in the autumn that she asked a friend to help her investigate.

Lisa still hoped that her suspicions were wrong: even the revelation that he simply had another family “wouldn’t be quite so devastating”. When her friends had unearthed enough to convince her that she was right, she changed her mind and wanted to fly to Ireland to confront him. Her friends talked her down.

Instead, they persuaded her to ask him to come to them, and to her surprise, he agreed (she thinks he needed to know what information they had on him). Even then, she held out “a tiny, tiny shred of hope it wasn’t what I thought it was”.

Kennedy, who spoke to the press after he was exposed, told the Daily Mail in 2011 that the confrontation, which took place in the house of several activists, was “hugely menacing”. Lisa, though, says such fear was misplaced: “For all we knew he was still a serving police officer. We suspected he was wearing a recording device.”

Where Lisa and Kennedy’s accounts agree, it is on the emotional devastation of the moment. Kennedy said that the accusations brought him to tears, and he was “destroyed” by the look on Lisa’s face. “I think the person who turned up was a shell of a person,” says Lisa of the encounter. “He had kept this up for a long time and it was about to come crashing down. I imagine that was scary, even though we weren’t scary people. The thing we wanted was to get to the truth. We wanted him to tell us the truth.”

Since that time, Lisa has tried to move on with her life. However, her fear of encountering another undercover officer is so strong that she has had to give up many things she was passionate about, including political campaigning. She has also moved to a new town. Yet the scars take a long time to heal. “While I have got some amazing friends I would trust with my life, I haven’t found able to trust anyone in an intimate relationship since then,” Lisa says, her voice breaking up over the phone.

In late 2017, at the time the #metoo movement was sweeping Britain, Lisa joined other women formerly deceived by undercover policemen in lodging a complaint with the United Nations. Describing their experience as psychological and sexual abuse, the women argue that the UK government failed to prevent institutionalised discrimination.

Campaigners against police spies estimate that only 10 per cent of operatives have been uncovered. Lisa hopes the complaint will unearth what remains elusive – the identities of those in the back rooms, who gave Kennedy his orders, and why. “The questions I still need answers to, they are not about him – who he was,” she says. “They are about who they were. Who was directing him, who was watching our relationship and what was it all for?”