The pictures are nearly always the same. A reality TV star, wearing a sports bra, holds up two sachets of tea for the camera. The larger packet is emblazoned with a light pink, one-word promise: “ACTIVATE”. The smaller one reads “CLEANSE”. These are adverts for Flat Tummy Tea – a detox tea that claims to reduce bloating – but you won’t see them plastered on the underground or splashed across a magazine. Adverts for Flat Tummy Tea most frequently appear on the Instagram profiles of the rich and famous – from Khloe to Kourtney to Kylie Kardashian. Today, the Advertising Standards Authority (ASA) has upheld a complaint against one of these ads. Back in March, Geordie Shore star Sophie Kasaei shared an Instagram post espousing Flat Tummy Tea. In a split screen before-and-after style photograph, Kasaei is seen with a bloated belly and a high ponytail. Next to this is a photograph presumably meant to have been taken at a later date, where Kasaei’s weight and her ponytail are down. “Nothings [sic] gonna get you flat the same as this tea will. The excuses are in the past, much like the water weight I used to have,” she captioned the post. 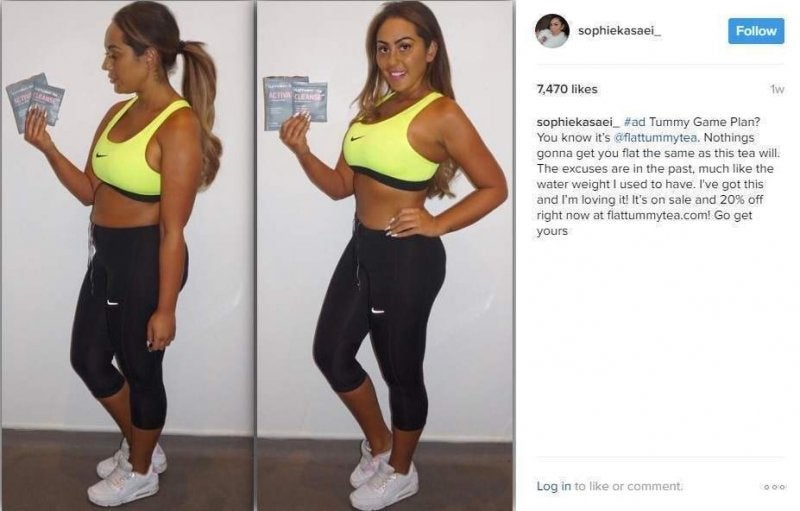 If you follow vloggers, bloggers, or reality TV stars on Instagram, this type of post will be familiar. Social media stars advertise a range of detox teas (#teatox!) including Fit Tea, Bootea, Skinny Tea, Lyfe Tea, and Flat Tummy Tea itself (which retails at £37.21 for a four week pack). Despite a swathe of negative online reviews (“all it does is give you gas and make you go to the bathroom”) and health warnings from medical professionals about senna, a laxative often included in detox teas, celebrities continue to sell these teas. It appears the teatox trend relies on consumers caring less about what’s in a product and more about who it’s in. Will the ASA’s ruling change things?

The ASA have investigated two issues with Kasaei’s post, upholding both of the complaints as a breach of the Committee of Advertising Practice (CAP) code. The first complaint challenged Kasaei’s claim the tea could help with water weight, finding that the company in charge of Flat Tummy Tea, Nomad Choice, had no scientific data to back up this claim. On Flat Tummy Tea’s own site, their claims are more carefully crafted, forgoing mentions of weight loss for promises of cleansing, energy-boosting, and metabolic benefits.  An asterisk then notes that these claims have “not been evaluated by the Food and Drug Administration”, yet such caveats are not readily disclosed in celebrity Instagram posts.

The second complaint challenged the very name of the product itself, which is not compliant with the EU’s Register of nutrition and health claims. To advertise Flat Tummy Tea, the product name has to be accompanied by a health claim listed as authorised by this Register – something Nomad Choice lacks. As they cannot yet prove that sipping their tea guarantees a flat tummy, the ASA found they breached the code.

The detox tea industry relies on influencers, so this landmark ruling could affect business. Yet marketers have always been very good at getting round advertising rules. Since 2014, social media stars have had to mark paid-for-promotions with the hashtag #ad (advert) or #spon (sponsored) – and in April, the ASA upheld a complaint against the makeup blogger who failed to do so in another advert for Fit Tummy Tea. Yet in June, Khloe Kardashian snuck #ad in her post for a hair supplement in an arguably disingenuous way. “This is more than just an #ad,” she wrote, “because I truly love these delicious, soft, chewy vitamins”. 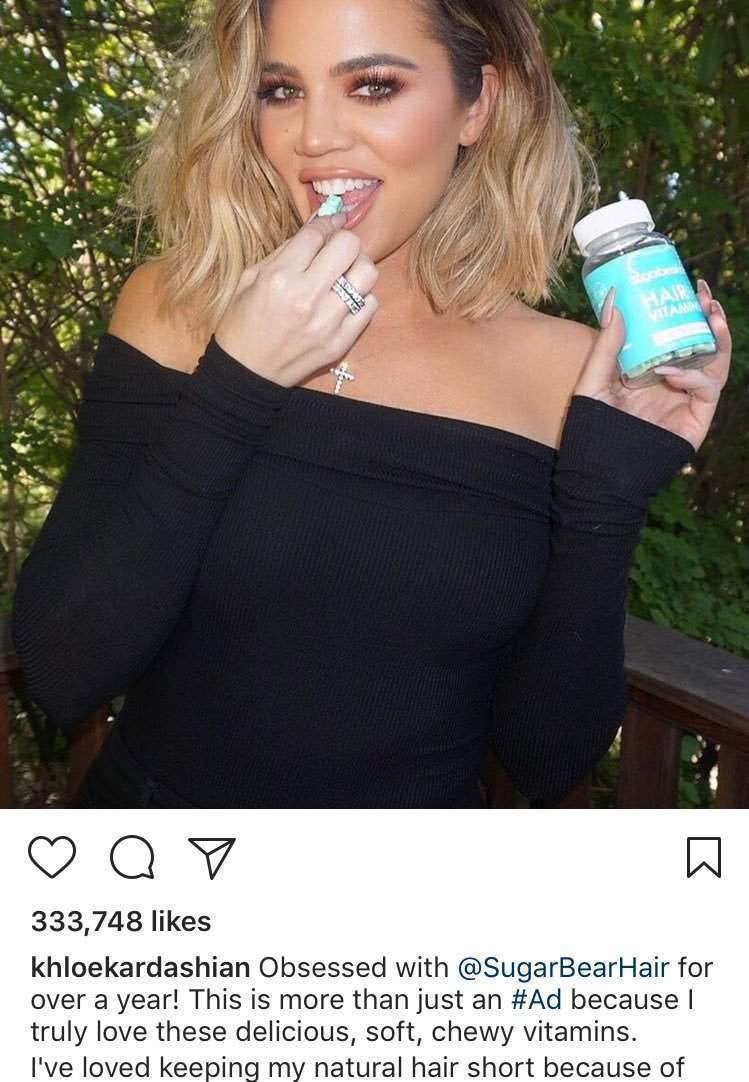 Whether the ASA’s ruling will affect influencers and tea companies therefore remains to be seen. Kasaei’s advert only fell under the ASA’s jurisdiction because she is a British star advertising to British consumers, but it is up to America’s Federal Trade Commission (FTC) to make rulings on any Kardashians advertising tea (it’s worth noting that Khloe posted about the benefits of Flat Tummy Tea and Fit Tea within weeks of each other). Kasaei’s ad has now been banned from appearing again in its current form, and the ASA have told Flat Tummy Tea to ensure that future adverts don’t make claims which aren’t listed as authorised on the EU Register. Before these health claims are registered, they will be unable to use their current brand name in an ad.