I am often criticised by both Remainers and hard Leavers for my commitment to staying in the European Economic Area. It is a fundamental violation, the argument runs, of the mandate provided by last summer’s referendum result. This sentiment tends to be strengthened by silly, populist slogans like “Brexit means Brexit”, which mean nothing and only further fuel the notion that we must leave all institutions as quickly as possible instead of treating EU secession (which we are forgetting presents the country which very many positive opportunities) as something we must understand and think our way through.

Brexiteers talk about the single market (EEA) as if it is but a minor obstacle in their quick escape vision of Brexit. This rashness is wholly irresponsible and will in the end galvanise exactly the counter forces seeking to keep Britain within the European Union. Many of them would be easier to argue with if they bothered to open their minds to alternative thinking and those of us who favour a softer Brexit. I mean, take this, from Brendan O’Neill:

O’Neill has his very intimate and close-knit band of followers, who will lap up anything he says because he’s cool, right-wing and edgy. But he doesn’t have such a tight relationship with factual information. He asserts that the single market is an EU institution, but this is categorically not the case. The single market, as per the EEA Agreement of 1994, is a collaboration – a trade deal if you like – consisting of the EU and three European Free Trade Association states: Norway, Iceland and Liechtenstein. The EU is not the single market, so from a purely logical perspective, Brexit cannot de facto mean to leave the single market. He then says that a softer Brexit entails “staying in” the European Court of Justice, which for EFTA EEA members is also an untruth, as per the skeletal structure of the single market below. 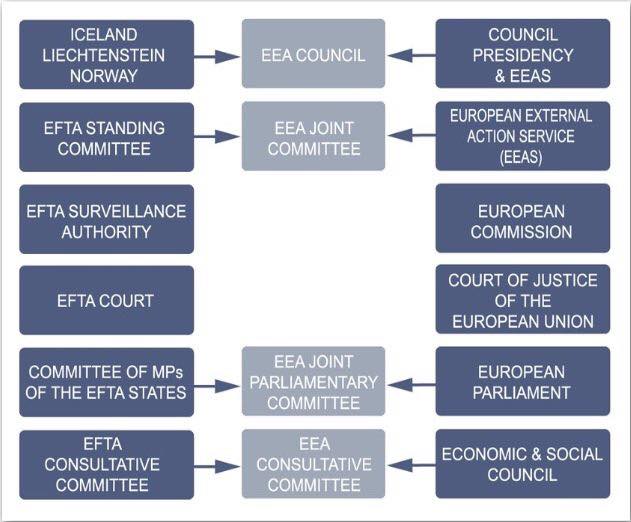 Misinformation like this has stifled the national Brexit discussion for months. But what is more concerning is the number of people who believe in an imaginary mandate to leave the single market, or rather to withdraw from the EEA Agreement. No such mandate exists. Vote Leave did not ever present to the electorate a plan for Brexit, and did not advocate leaving the single market. Don’t believe me? Our website is still online at voteleavetakecontrol.org. Take a look at our campaign messages and our claims. We argue for things which are utterly achievable in the EEA and make no mention at all of leaving the single market.

We campaigned for an end to ECJ subordination, which EFTA EEA provides. We demanded more control over immigration, which Article 112 of the EEA Agreement provides. We asked to be free to trade with the entire world, which EFTA EEA members are, largely by virtue of their ability to reclaim independent voting rights at international bodies (like the World Trade Organisation), which the EEA provides. We wanted to stop sending the EU money, which EFTA EEA membership ensures is spent on EEA grants which the UK would participate in. As for the NHS, I don’t support nationalised healthcare so could care less how poorly the system is funded. And, crucially, we wanted the ability to make our own laws, which the EEA largely does not infringe upon. As the Brexit blogger Pete North notes:

“That is where the EEA option is the superior model. It really is about “taking back control”. When the EU brings a new piece of legislation into being (likely adopted global standards), it is not automatically adopted by Norway. There is a constitutional process whereby the Norwegian parliament debates and decides whether or not to adopt a measure. We know that there is a penalty if they do not adhere to single market rules, but ultimately it is their decision to consider the balance of trade-offs according to their own strategic trade goals and domestic values.”

Around early May 2016, the Remain campaign started to go hard on the fact that leaving would mean leaving the single market. But there was absolutely no official scope for them to say this at all. It was perhaps their most deceptive lie during the entire campaign. James McGrory and his colleagues on Cannon Street sat in their office and forced this issue on to the agenda. It was something they conjured up out of thin air because it aided one of their primary arguments for remaining: Leave doesn’t have a plan for Brexit, it’ll therefore be a step into the dark (the horrendous catchphrases are piling back into my brain as I type).

Some Leavers, it is true, did want an exit from the single market. But they are not as numerous as certain people would have you believe. And if we took all of these people into a room, and showed them how the EEA Agreement can ease their concerns, many would be quickly converted. To them Brexit may mean a single market exit, but to me, Brexit means leaving the European Union and is part of a much bigger plan, both for democracy and the future of European trade.

I don’t care how many times Nigel Farage uses the term “backsliding” to describe the progress of Brexit negotiations. Brexit is not his toy to play with. Brexit is a national effort which ought to be constructed in the national interest. Brexiteers are often guilty of forgetting that an EU departure is for all of us. It isn’t something to be rubber stamped only by our approval and the democratic process, including scrutiny and critique, must continue. I would also point out that a Brexit which relies on continued membership of the single market could be the only way to repair a fractured electorate, now more likely to exploit non-party dividing lines than perhaps ever before.

Oliver Norgrove is a former Vote Leave staffer. This article is an edited version of one which originally appeared on his blog, which can be visited here.