If you have even the vaguest awareness of US politics, you’ll no doubt recall the role Florida played in the 2000 presidential election. The result in the state was so close that arguments about recounts and hanging chads went on for weeks, before the result was finally settled – and the next president decided – by the US Supreme Court.

The odd thing about Bush v Gore, though, is that nobody questioned which of the two had more votes: it was Al Gore, by more than half a million. (The number of contested votes in Florida was something like a tenth of that.) To put it another way, it was always clear that more Americans wanted Gore as president than Bush.

And yet, the outcome of the election ignored that entirely. It turned instead on who had won Florida. That, the Supreme Court decided, had been Gore’s opponent: George W. Bush became the 43rd president of the United States, and the rest is history.

So why did a man who everybody agreed had come second become president? Why did the whole thing end up turning on the number of votes in a few counties of former swamp?

The answer comes down to that weirdly undemocratic American invention, the electoral college. The founding fathers, you see, did not actually intend for the president to be chosen by the people.

Much of the constitution was the work of the over-achieving Virginian delegation to the Constitutional Convention of 1787. Their plan, written by James Madison, suggested that the president should be chosen by Congress.

That idea was rejected on the grounds that it would undermine the president’s independence. Some delegates feared that allowing a bunch of men who spent all their time locked in a room together arguing pick the head of state would lead to “intrigue” (yes), and suggested the president should be chosen by popular vote instead.

So they settled on a compromise. Each state would pick “electors” – how they did so was their own business – and these would in turn pick the president. Senators and congressmen were specifically barred from becoming members of this electoral college; but an aspect of the original plan that survived was that the number of electors in each state would be equal to the number of representatives it had it Congress.

Some of the oddities in this system have been ironed out over time. By the mid 19th century most states were choosing electors by popular vote: the presidential election may be indirect, but it’s an election nonetheless. After the 23rd Amendment passed in 1961, those who lived in Washington DC, previously disenfranchised because it isn’t a state, were given the vote too (it gets three votes in the electoral college).

But others anomalies remain. Here are three:

1) A lack of proportion

One of the big issues in 1787 was persuading the original 13 states to agree to the new constitution at all. Many of the smaller ones (Delaware, New Hampshire) were nervous that, by joining the union, they would instantly be dominated by their much bigger neighbours (Virginia, Pennsylvania, Massachusetts).

To keep them on board, the Constitutional Convention agreed the “Great Compromise”. The size of the delegations each state sent to the House of Representatives would be roughly proportional to the size of its population; in the Senate, though, every state would get two senators, whether it had several million people, or three old blokes and a dog. In other words, the US constitution had to deliberately over-represent smaller states in Congress, just to persuade them to sign up to the thing in the first place.

All this still applies today – and because size of a state’s delegation to Congress determines the number of votes its gets in the electoral college, smaller states are over-represented in presidential elections, too. The result is that a vote in California is worth less than a third of a vote in Wyoming: 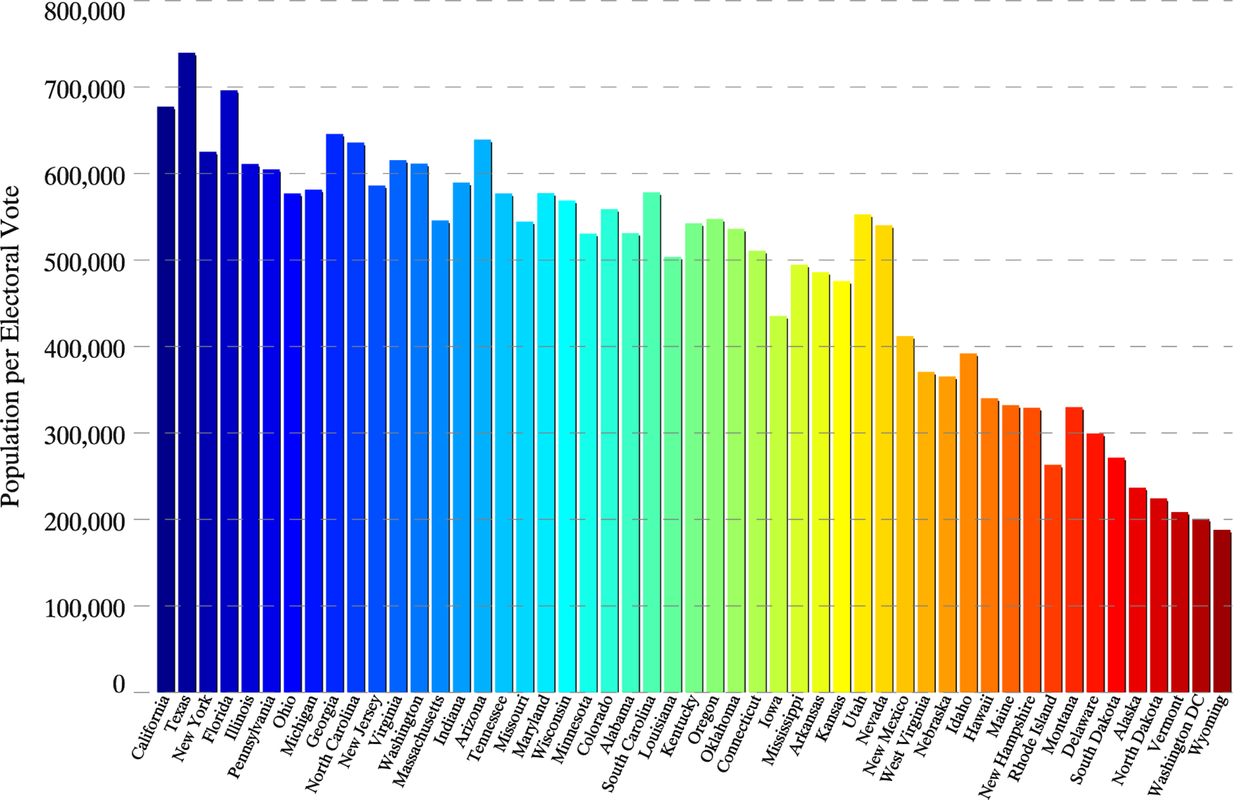 The people don’t choose the president: the electoral college does, with electors generally voting based on the votes of the people in their state.

But the operative word there is “generally”: while most states have laws requiring electors to vote with the popular will, or rendering their vote void if they don’t, some 21 states do not. So, occasionally, there are “faithless electors”, who don’t vote the way their state wants them to. In the 57 presidential elections between 1788 and 2012, there have been 157 incidents of such faithlessness (although, to be fair, in 71 cases this was because the electorate’s preferred candidate was dead).

This has never affected the outcome of an election: the closest was in 1836 when the Virginia delegation refused to vote for vice presidential candidate Richard Mentor Johnson on the grounds that he was having an affair with a slave. (Being massive racists, they were fine with the slavery and the abuse of power; it was the interracial sex they had a problem with.) But Martin Van Buren’s election as president was never in doubt, and even Johnson was confirmed after a vote in the Senate.

Even in those states which don’t have laws to punish faithless electors, becoming one is still often a bloody stupid thing to do, since it generally means betraying the party that made you an elector in the first place, an act which will almost certainly wreck your career. Nonetheless, it is constitutionally possible that, when the electoral college meets after November’s election, some of its members will ignore the result entirely and propose, say, Kevin Spacey as the next president. And those are the votes that count.

3) A lack of interest

Most states allocate their electoral votes on a winner takes all basis. There are two exceptions to this: Nebraska and Maine both hand out one electoral vote to the winner in each congressional district, and two to the state-wide victor. This rarely makes any difference, since both states are small, and any candidate who carries the Maine 2nd is likely also to have carried the whole of Maine. Just occasionally, though, it does: in 2008 Obama narrowly carried the Nebraska 2nd (Omaha, basically), prompting grumpy local Republicans to redraw the boundaries to dilute the local Democratic vote and so ensure this wouldn’t happen again.

This, combined, with demographics, mean we already know how something like 363 of the 538 electoral votes on offer will go. Only around 13 states are considered competitive this year. In the other 37, plus the District of Columbia, we might as well already know the result.

The result is that, for the next few weeks, there will be endless reports about Florida, Virginia and Ohio. But you’re not going to hear so much about how voters are feeling in California or Delaware or Arkansas or Texas. The first two will go for Clinton; the last two will go for Trump. The campaigns will ignore them; the voters may as well not show up. State-wide demographics mean the result is already clear.

In a true popular election, every vote would count equally. In the electoral college, they do not. The result, 16 years ago, was four weeks of legal wrangling over a few hundred votes in Florida. The result, this year, is that it’s entirely possible that Donald Trump will become president – even if Hillary Clinton gets more votes.