“Every school holiday, we lose ten to 15 girls. They elope or conceive.” I’m sitting in an orange-brick house, mint-green and pink paint flaking off the walls. This is the front line of an ambitious social experiment: trying to lift families out of poverty by convincing them to educate their daughters.

My guide is Paul Lyavaala, the head of school at Kityerera High in Mayuge, eastern Uganda. The son of a local dignitary, he studied in the capital, Kampala, but returned home to run this institution, which has 605 students, 58 per cent of them female. Before the British charity PEAS opened Kityerera, students faced a ten-kilometre walk to the nearest secondary school.

Most of the school’s pupils come from homes like this one, just ten minutes’ walk from the gates. There are few possessions in the front room here – a grain silo, a vivid poster of the country’s president, Yoweri Museveni, unironically photoshopped into various Rambo-style poses – but there are handmade doilies on the table.

The homeowner, Yusuf, never went to school; he depends on agricultural labour, digging in a nearby field for himself in the morning and for others in the afternoon. One of his eight children comes to meet us, introducing herself as Phionah. She is 18 and hopes to train as a nurse. The country sorely needs girls like her – there is one nurse for every 11,000 people – but the training costs two million Ugandan shillings (£445), and her family does not have the money.

Further down the road, Paul greets another family: a father and his two wives. Two months earlier, the second wife’s teenage daughter Precious had a baby, Moses. Many schools wouldn’t have allowed her to return but Kityerera has, and she comes home every lunchtime to breastfeed. “When they found out she was pregnant, they were afraid she would be ashamed and feel small,” Paul says, translating for us. “They were extremely happy the school let her come back and gave her free time to breastfeed.”

Precious is lucky, he tells us afterwards. The family believes in witchcraft, and a few years ago might have thrown her and the baby out for bringing bad luck and attracting the disapproval of neighbours. Earlier, on the short drive to the village, we had passed a mound of rocks by the road. “They caught a thief yesterday; he stole a motorbike,” Paul had observed, with no visible emotion. A pause. “Mob justice.” 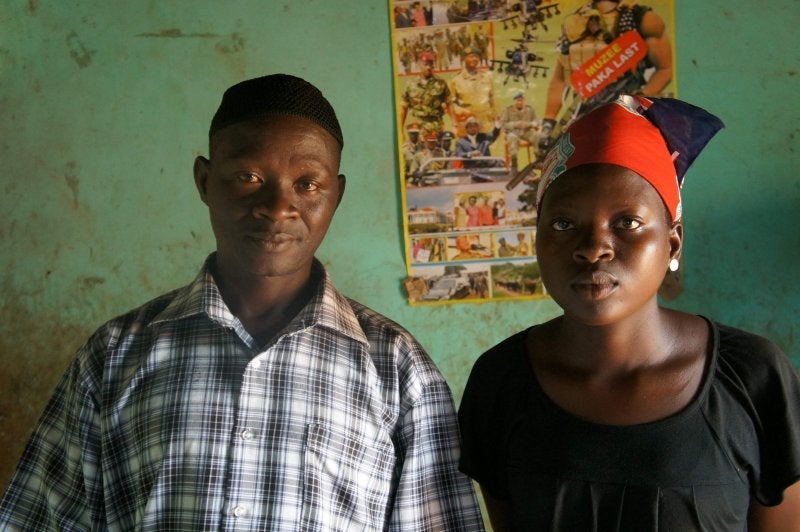 Uganda is a beautiful country: iron-red soil and lush green grass. It defies easy characterisation. Middle-aged men hold hands unselfconsciously in public, but in 2013 the parliament debated a bill that would have made homosexuality punishable by death. Poverty rates have fallen dramatically in the past two decades, but 37.8 per cent of the people still live on less than £1 a day. Yet in Kampala you can (if you have the money) eat a takeaway chicken with ginger and spring onion that tastes like Chinatown’s finest. The recent arrival of Chinese investment money is obvious – the highway running from Entebbe Airport to the capital is plastered with signs in Mandarin next to half-built roundabouts.

I arrive a month after the presidential election, which brought about the unsurprising re-election of Museveni. The victory was helped by his chief rival, Kizza Besigye, being under house arrest. That said, the appeal of continuity under a strongman – Muse­veni has been in charge since 1986 – is more understandable when you look at some of the countries that share a border with Uganda: Rwanda to the south, the Democratic Republic of Congo to the west, Kenya to the east and South Sudan to the north.

I’m here as the guest of PEAS, a charity supported by the New Statesman which runs 28 schools in Uganda and two in Zambia. In recent years, most development money has been focused on primary education, pushed by the second Millennium Devel­opment Goal, which states that every child in the world should complete five or six years of schooling. In 1997 Uganda began to make primary education available to all, and it now spends 900 billion shillings (£200m) a year supporting the policy, though Museveni’s government is troubled by rising dropout rates.

At secondary level, those are hugely magnified. Even schools supported by charities need to charge fees to become sustainable in the long term, and the cost, plus books and uniform (between 25,000 and 35,000 shillings, or £5.50-£7.70), is too much for many parents. Children are also often needed at home to do seasonal work, or they get married young, or families decide there is no point educating their daughters – hence Paul Lyavaala’s gloom about the numbers of pupils who disappear from the rolls over the summer holiday.

Travelling through rural Uganda, I get used to double-takes and occasional cries of “Mzungu!” (a Bantu word, first used for European explorers, that is now applied to any white person). Yet the class sitting in front of me at Kityerera High could not be more polite. There’s a formality to schooling in Uganda that jars with my recent trips to state schools in London. The uniforms – orange dresses, and white shirts with grey trousers – are immaculately washed and pressed even though the school offers little in the way of laundry facilities. This school has a “senior woman teacher”, Lilian ­Wamai, and a “senior man teacher”, Moses Kibita. There is one laptop, which belongs to the headmaster, Albert Ondonyi.

The school has gathered pupils to talk to me about their lives and aspirations. Jonathan, 17, loves music but wants to be an aeronautical engineer. Eighteen-year-old Felistus is the third of six children and one of the few boys to join the “Girls’ Club”. The children’s names – Isaac, Zakaria, Fatumah, Aloysius – reflect the country’s religious ­diversity, with a population that is 44 per cent Catholic, 39 per cent Anglican and 10 per cent Muslim.

PEAS puts extra effort into female education, with the support of money made available by the UN and NGOs. (The boys at ­Kityerera tell me they are annoyed that their dormitory, unlike the girls’ one, doesn’t have solar-powered lights.) All the research suggests that better-educated women are healthier, are more able to work for money, marry later and have healthier children. “Educate a girl, education a nation,” reads a sign stuck into the grass.

Sitting in a cool classroom, we talk about the Girls’ Club, an after-school group the school has established to try to retain more female pupils. Here, they do what we might call PSHE (personal, social, health and economic education) and learn skills such as basket-weaving. The boys help by collecting the raw materials, such as papyrus reeds or palm leaves, from nearby swamps. At the local market, a small basket might sell for 2,000 Ugandan shillings (44p) and a large one for 10,000 (£2.20). The profits help ­pupils buy extras they need.

There is one particular extra I’m interested in because it can make a huge difference to girls’ chances of making it to the end of secondary education: sanitary towels. At the school canteen, a pack of disposable pads costs 2,500 shillings (56p), putting them out of reach for many pupils. The girls have to use rags, or whatever else they can find. Some parents keep them at home and they lose a week of lessons every month.

As girl after girl tells me how much she worries about standing up in class to find blood all over her orange dress, I remember how much the same thought preoccupied me as a teenager. At my school, we compulsively shared stories of the apocryphal girl who had started her first period during a choir recital and had fled the assembly hall, eternally shamed as a scarlet stain spread across her uniform.

Mixed up with embarrassment here in Uganda is a fundamental issue of hygiene: managing a period without running water or sanitary bins can be messy and smelly. It might be only an eggcup of blood, but often it feels like a deluge. Across the developing world, and in refugee camps, a lack of safe, clean, single-sex toilet facilities exposes women to violence and disease.

For that reason, the girls and boys of Kit­yerera are well coached in telling Western visitors about menstruation; I’ve never had a 15-year-old boy talk to me about periods before, never mind half a dozen of them. Two years ago, the girls in Kityerera were ­issued with AFRIpads, made by a local company. Reusable, washable sanitary pads clip into a fabric holder that can be slotted inside knickers. There is only one problem: they are supposed to be used for not much longer than a year. So the girls want more.

PEAS is trying to identify more of these small-scale ideas that can have larger benefits. At another school, this one in Malongo, near Lake Victoria, five hours’ drive from Kampala, Annie Theresa Akech from the board of governors tells me how important it is to let parents pay in instalments. (Subsistence farmers and fisherfolk can rarely produce a lump sum.) Yet the schools do charge fees, because the aim is for all of them to become self-sustaining within a year and to be run and staffed by local people. Solar panels provide electricity, which in turn ­allows for the installation of computer labs. None of the PEAS schools uses corporal punishment, in contrast to a nearby primary school we visit, where a long, swishing cane keeps the children in line.

In this context, sanitary pads – and the craftwork on offer at Girls’ Clubs that makes it possible for pupils to buy them – are liberating. They offer equality, helping girls get as much out of school as their brothers do. They free girls from the extra burden of worrying that they will be shamed in front of their classmates. They give girls in Uganda what they need: a chance.

Helen Lewis stayed with PEAS at its house in Kampala. You can donate to the charity here: peas.org.uk