He's not the most obvious icon, but Ed Miliband has become the subject of a growing group calling themselves the "milifans". Mostly young women, many of whom are studying for school exams, have taken to Twitter to proclaim their affection for the Labour leader.

The #milifans are also taking on some of the big questions:

In all seriousness, why do ppl have issues with Ed's facial expressions when David had his pp as this for months? pic.twitter.com/pH1LFUzbNa

Some of the jokes slightly pass this mole by, admittedly:

But some are sheer poetry.

Most importantly, the Milifans are genuinely engaged in politics. Many of them tweet about studying the subject, and the de facto leader of the fandom, a 17-year-old named Abby, is urging other young people to take an interest in Labour policy.

If there's a Milifan in your life, you can buy them a "lifesize" cardboard cut out: 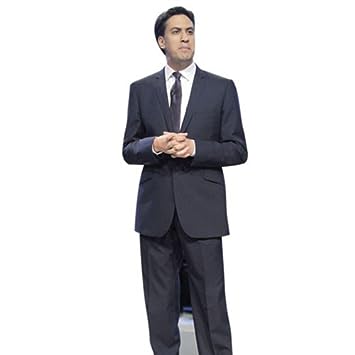 Which, helpfully, can also serve as a sort of domestic scarcrow.

But whatever you do, proceed with caution:

ANOTHER UPDATE! He's commented on the Milifandom!

During an interview with Radio 2, Ed's commented on his new fans. "I told my wife about it and she thought it must be a case of mistaken identity," he told Jeremy Vine. "She went from amused to bemused."

"I'm definitely blushing now," he said, before a saucy bit of self-deprecation: "I certainly wouldn’t claim to be cool... I’ve never been called that."

He added that the person who started the fandom is making a "serious" point about young people being given a voice. Swoon.

The logistics of saving lives