On Tuesday, Chuka Umunna reminded us how central ‘productivity’ has been to the post-crisis economic debate. Yesterday the IFS blamed the living standards crisis on the so-called productivity puzzle.

But there is no puzzle about it. Today the TUC publishes a new report showing that the government’s austerity policies should take most of the blame for the productivity failures of recent years.

No-one denies that we need investment in skills, reform of finance and changes to corporate governance if we want productivity growth. But the analysis in the report shows that these can only do their work if the next government invests in growth, which can kick-start a virtuous circle of improved productivity.

In contrast a new round of austerity and public sector pay restraint, as proposed by the Chancellor, is likely to cause further weakness in productivity and damage the potential for sustainable pay growth.

Our argument is in three steps:

Step one: austerity has led directly to lower economic growth.

The economy had begun to recover at the 2010 election, but this was choked off by coalition cuts and the VAT increase.

The chart shows annual increases in government final demand (including wages and salaries, procurement and investment) in cash terms. These have been very subdued relative to increases in previous years: the post-crisis annual increase in spending was £2½ billion a year, compared to the pre-crisis years at around £19½ billion. 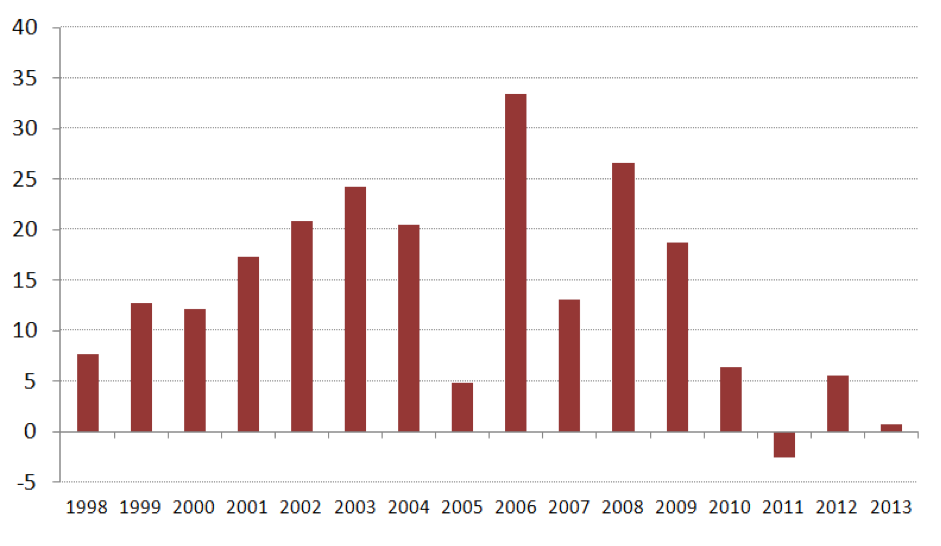 As a result GDP growth has slowed from an average of 5.0 per cent a year before the crisis (2004-08) to 3.7 per cent after the crisis (2010-13) – these are based on GDP in cash terms for reasons that become obvious. While others argue that GDP growth slowed for reasons beyond the government’s control  (namely the eurozone), the following chart of ‘contributions’ to GDP growth before and after the crash show very clearly that government (the brown bit) accounted for all of the reduction in growth of 1.3 per centage points.

Step two: The labour market has responded to poor growth through a decline in real wages

This is different to previous recessions which produced higher unemployment.  In the language of supply and demand, this time reduced demand has hit the price rather than the quantity of labour.

What happens when we have reduced GDP growth is that it has to be absorbed by some combination of what goes to profits and what goes to labour. How labour’s share is allocated between earnings and employment determines whether wages or jobs take the bigger hit.

The latter is shown in the next chart where we have in the jargon decomposed  the total of ‘wages and salaries’  growth from the National Accounts showing the difference between before and after the crash. 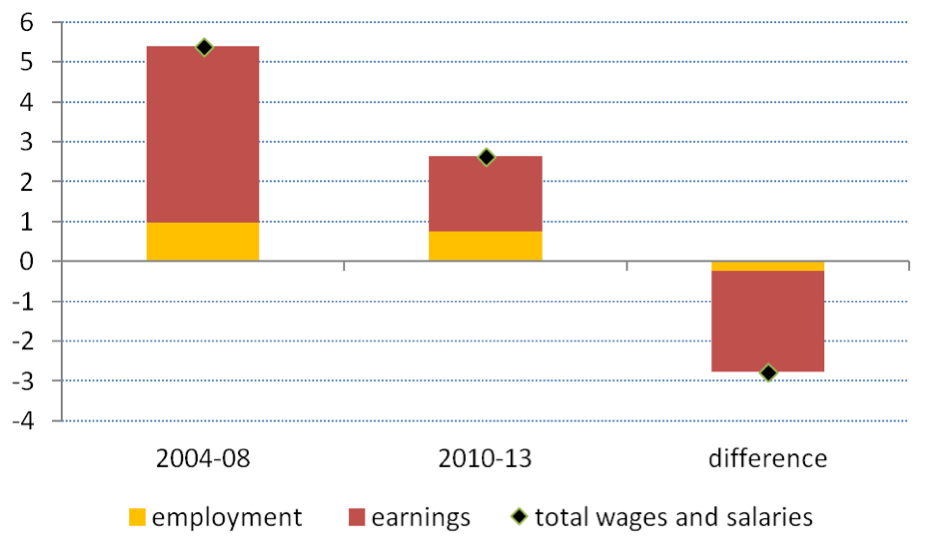 Wages and salaries before and after the crash

The chart shows that within the labour market the reduction in wages and salaries growth has ‘simply’ been met (almost) entirely by lower earnings growth rather than lower employment growth.

Step three: during a downturn if employment remains high productivity must fall

Productivity is defined as the ratio between GDP and employment.

Since the crisis austerity has delivered lower GDP growth, but as employment has remained bouyant, this means that productivity has slowed down. If the labour market had instead adjusted through quantity (slower employment growth) rather than price (higher earnings), then productivity growth would have been higher.

This is an obvious and simple explanation, but it stands in contrast to the vast and ever-expanding literature on explanations for the shortfall in productivity.

These mostly focus on the so-called supply-side, such as a shift from high to low productivity sectors, misplaced capital investment, skills shortages, and dysfunctional credit markets.

While most commentators recognise demand must play a role, few have worked through what that means (the most honourable exception is Bill Martin’s and Bob Rowthorn’s work of 2012, on which this and previous TUC work has drawn).

This has been hugely damaging. The experts on whom the media rely and shape the economic and political debate, have let the government off the hook. The real villain, austerity economics, has not even been put on trial in the case against weak productivity. In the meantime the living standards of the many have been hammered.

What is worse is that this error leads to a fundamental policy error. Arguing that we can only have growth and better living standards as a result of productivity increases gets the argument exactly the wrong way round.

The truth is that investment and increases in demand and an end to austerity economics will inevitably boost productivity – and with the right supply-side policies to ensure growth is fairly shared and that investment can get a good return can deliver a virtuous circle where demand boosts productivity which in turn produces more growth.

If there is a puzzle, it is why so much of the economic establishment  has neglected the demand side. When we have severe austerity, reduced economic growth but sustained employment growth, even if on the back of painfully low wages, it is simple arithmetic to see that productivity must suffer.