It’s just after 9am, and Barking’s East Street Market is unfurling into action. A morning chorus of shoe-selling cockneys, hearty sales pitches from a traditional African dress stall, and speakers pulsing out deep house from a stand manned by Pakistanis, is enough to illustrate the diversity here.

All of a sudden, an enormous orange bus pulls up just off the market, in a square outside the local college. Two construction workers pause to stare, squinting, at the vehicle. Some Muslim women stop rummaging through school uniforms at a nearby stall and amble over. The Operation Black Vote battle bus has arrived. 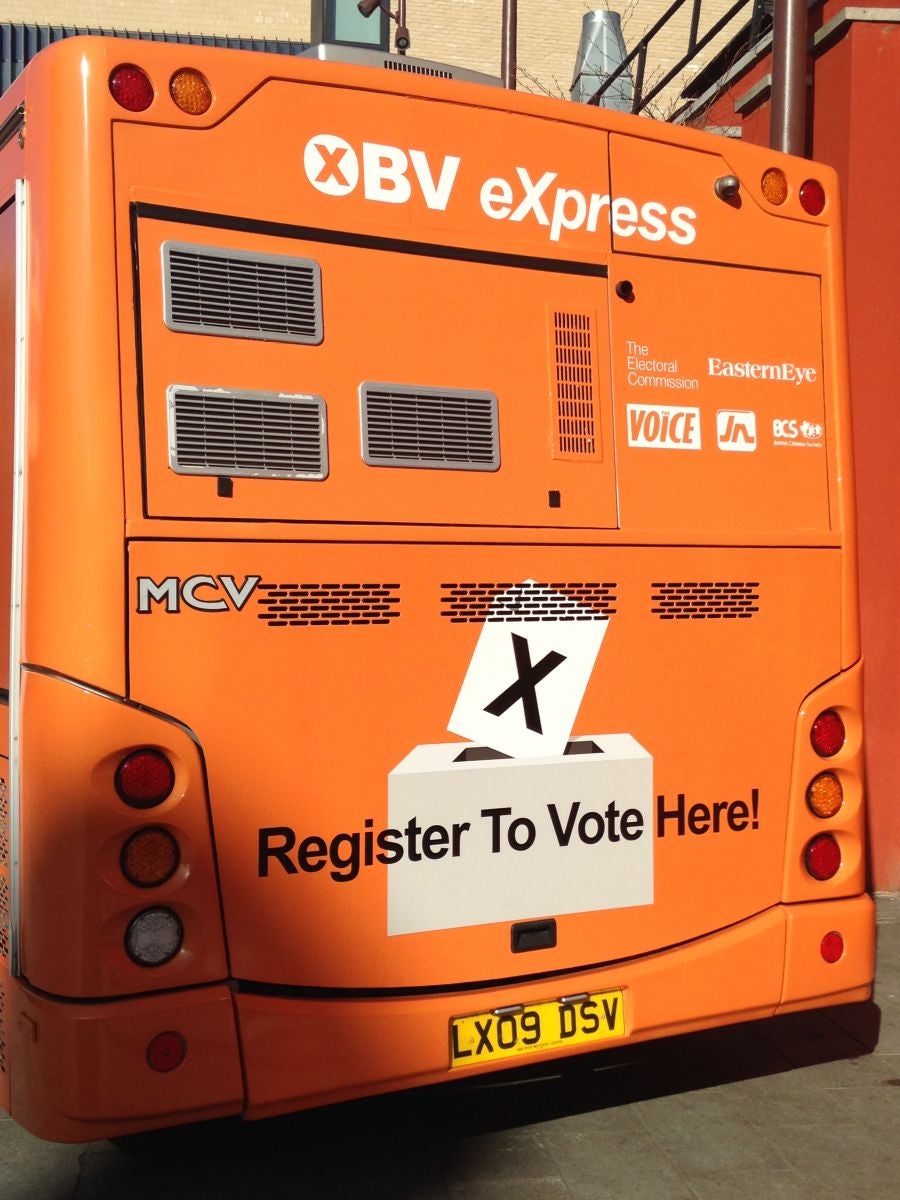 I join the campaign bus registering black and minority ethnic people to vote on Day Two of its tour around England, Wales and Scotland. It is stopping in the constituencies where voters from BME communities could make a big difference to the general election result if they sign up and then turn out in May.

As BME people are less likely to be registered than the white British population (76 per cent to 86 per cent), it is a laudable endeavour, but the name “Operation Black Vote” doesn’t encompass all that it entails.

Simon Woolley, the director and founder of this operation, which began in 1996, explains the name:

“For the same reason why the Fawcett Society targets women, Operation Black Vote target black and minority ethnic communities,” he says. “So yes, we do what we say on the tin, precisely because we’re aiming at tackling an imbalance, tackling injustice.

“While we target black and minority ethnic communities in this campaign, we collaborate with other organisations like Bite the Ballot [to register young voters], Operation Disability Vote, women’s groups, so it cannot be remotely said that we are separatists, segregationists, and just about us – actually we’re about a decent society.”

Woolley is passionate about this project, attracting people off the street and onto the bus by sheer force of character. His distinctive look – tinted sunglasses, a black roll neck sweater under a dark jacket with the collar turned up ­– is matched by the striking design of the bus. It is covered in enormous slogans and illustrations: Rosa Parks sits resolutely on one side, and on the other is a stark image of teenagers being stopped and searched. 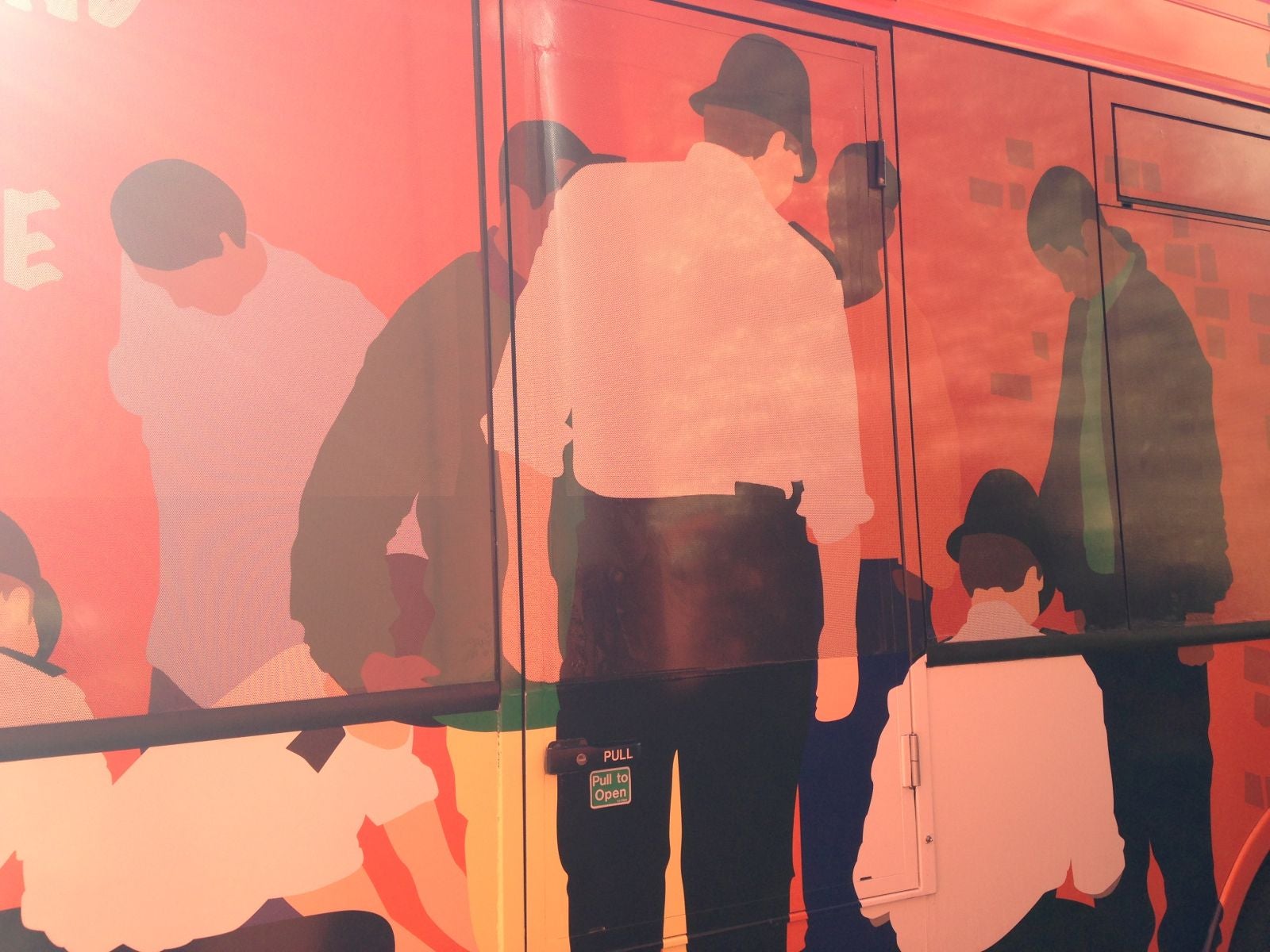 Visitors can register at the 12 laptops stationed inside the bus’s “IT Suite”. There are also plush red breakfast bar stools, cream sofas, strips of neon blue lights, and leaflets about everything from anti-fascist marches to information for the British Chinese community. Pop music blasts from an iPod out onto the square to draw people in. It’s like a cross between a political protest and those party limos that transport sixth formers to prom.

Woolley, who calls this project his “vocation” rather than a job, aims to “make sure our institutions are inclusive, representative, and have social and racial justice writ large in the narrative”.

He was born to Caribbean parents, and grew up in Leicester, fostered and then adopted by white parents, who he describes as “my Welsh mother and Irish father”. He recalls that while he was “always quietly political”, it was only in the Nineties – when he joined the electoral reform pressure group Charter88 – that he “recognised that while I believed in democratic reform, there needed to be a black and minority ethnic narrative, which was able to use the democratic process to tackle racism”. 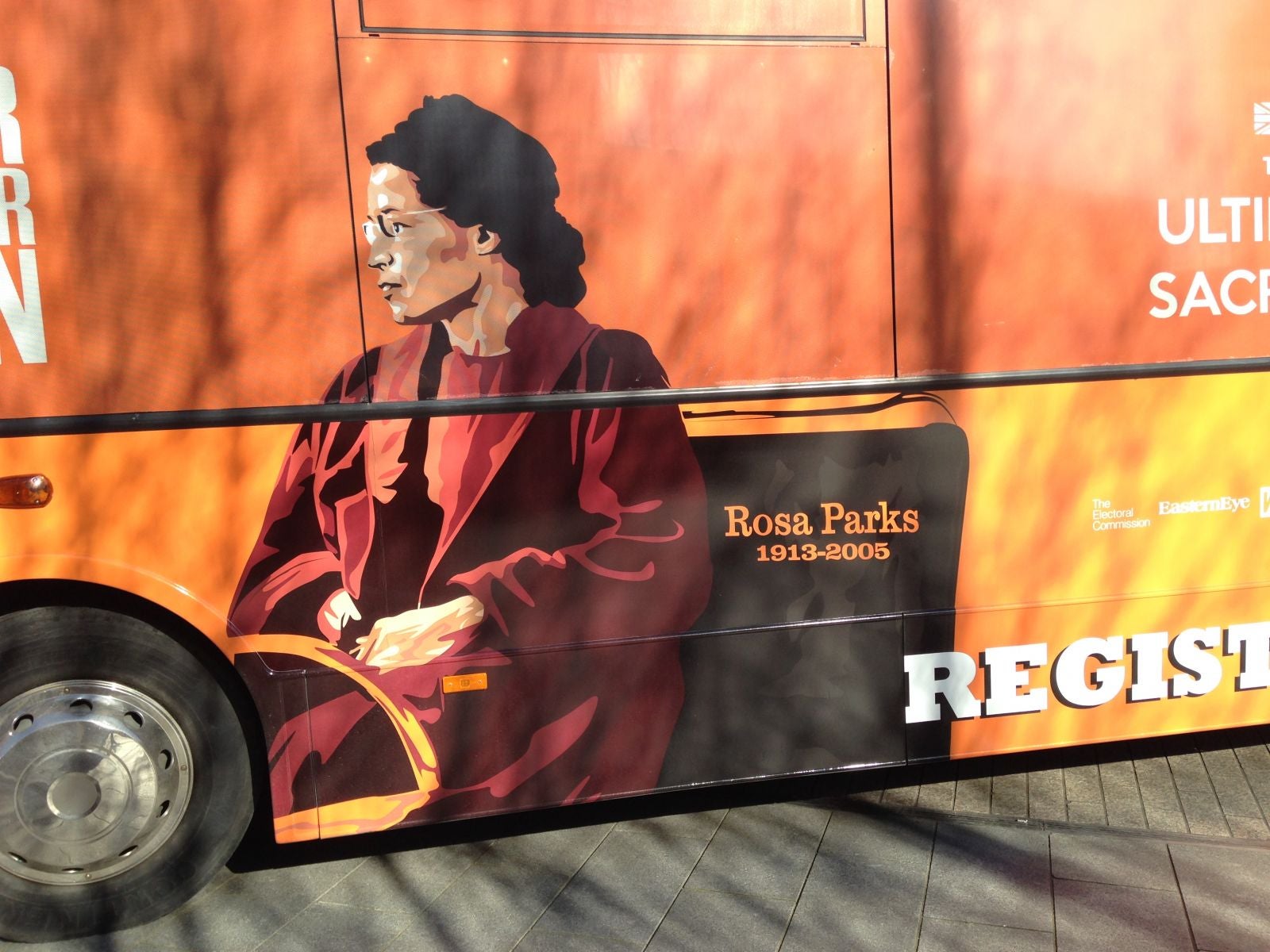 And the upcoming election is more important than ever. The BME vote could decide the outcome in 168 marginal seats, where that section of the electorate is larger than the majorities by which those seats were won in 2010. With such a tight contest ahead, Woolley is convinced that black and ethnic minority voters could decide the overall result:

“It’s incredible,” he grins. “In elections it’s all about the numbers. And we have the numbers! We have the numbers in so many seats, so many battlegrounds, that there’s not a political leader who hasn’t beaten a path to my door, precisely because they recognise that in an election that will be won and lost at the margins, the black vote is crucial.

“The bit that challenges is getting our own people to realise that actually we have the best lever we’ve ever had, ever, in British society.”

The ultimate aim of more BME people voting is to ensure “social and racial justice”, Woolley asserts. “The end is to have policies that are able to close those persistent race inequality gaps in education, in employment, in health, in housing, in the criminal justice system. At the moment, there are almost no policies to close the gap, and as a result – particularly in the era of austerity ­– those gaps have widened.” 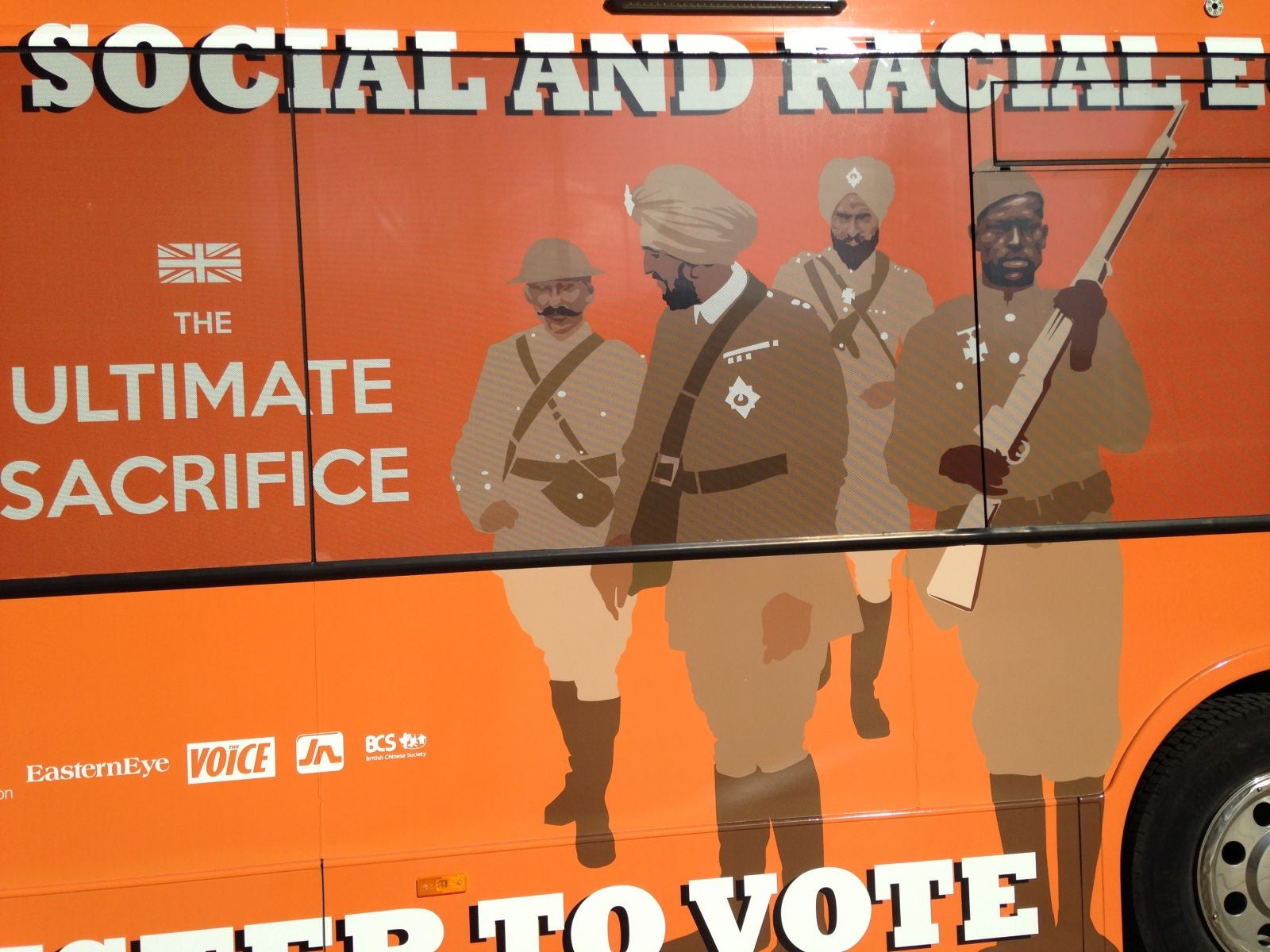 Everyone from construction workers in hard hats, groups of college students giggling and taking selfies, and middle-aged women from the market come and sign up to vote on the bus.

“Be strong, brother,” smiles one young black man stepping off the bus, having just registered, slapping a similar-aged eastern European man wearing a high-vis vest on the shoulder as he climbs on board.

“Hurry up, you have to be able to vote,” yells a Thai woman to her daughter down the phone. “I am worried about my 18-year-old not being registered, I’m trying to get her down here,” she tells me, perching on one of the bus’s leather sofas. 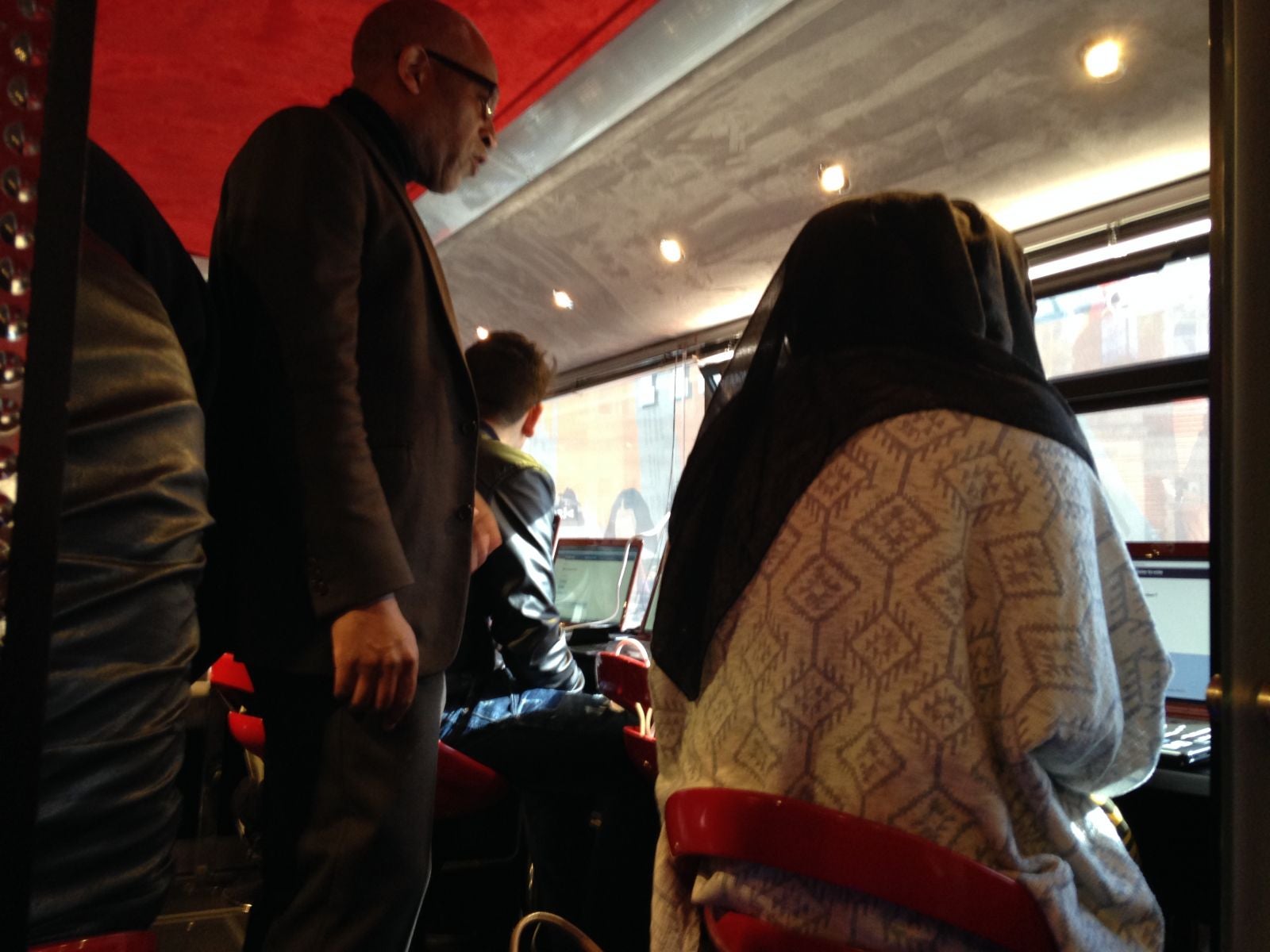 A 17-year-old business student whose parents moved here from Romania has just signed up to vote. “We need to vote so that our future means something,” he tells me sheepishly. “If we want to become something in our lives. Without anyone to encourage us, we would do nothing.”

Another college student studying business at the technical skills academy nearby, who has only just turned 16, also registers. She is of Indian origin. “Even though I can’t vote yet, I thought I’d check it out. We have to have a say,” she says. “We are citizens of this country too, so we should have a say.”

A young Muslim woman originally from Pakistan, aged 18, who is doing an IT course, sits down at one of the laptops. “I need to get my voice heard,” she tells me. “We all live in one community, so we should all be heard.” 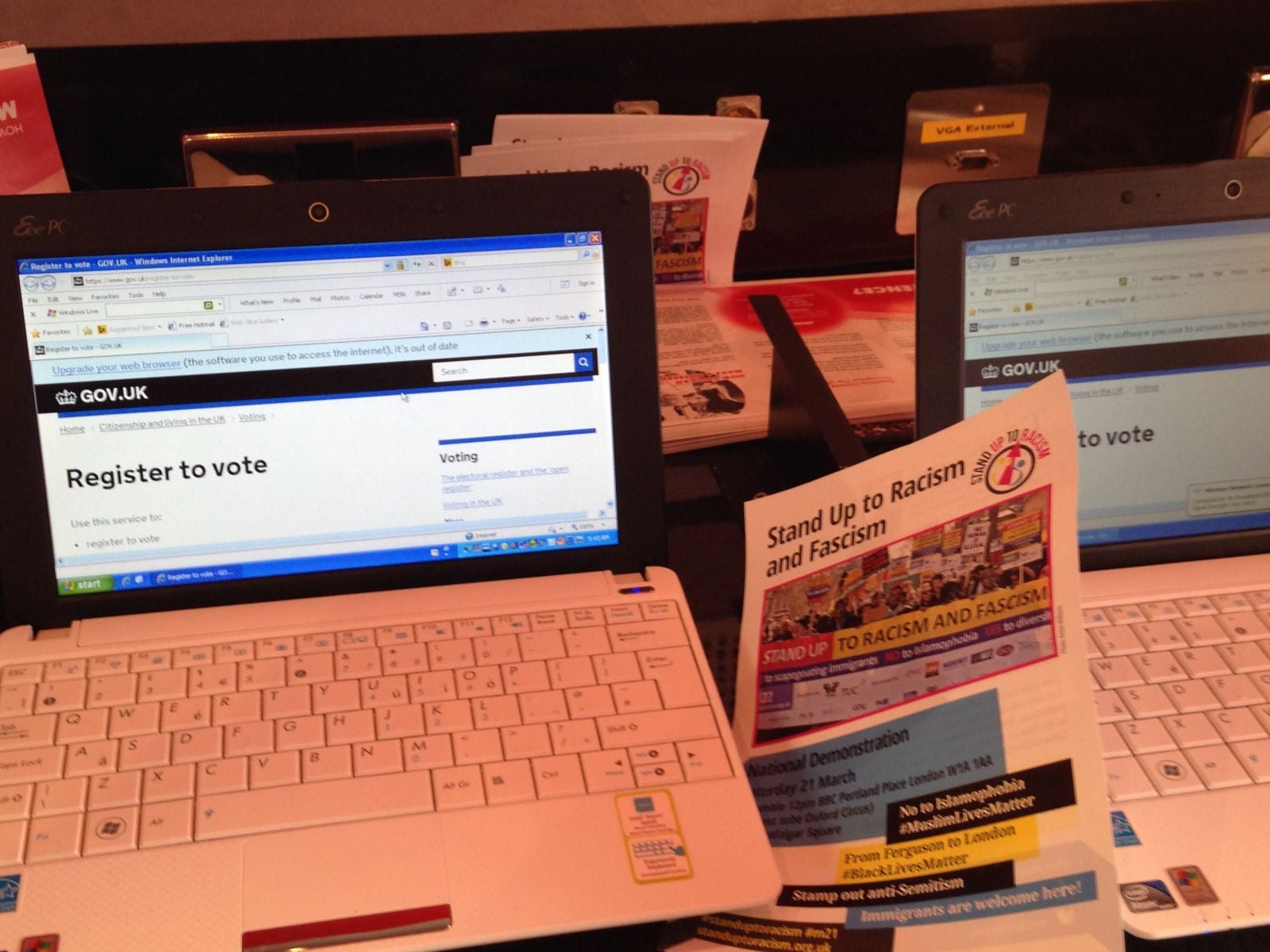 It is significant that Barking is one of the bus’s first stops. This area ­– historically part of Essex – was until recently under immense pressure from the BNP. The far-right nationalist party’s then leader, Nick Griffin, ran for the seat in the last election. He failed to win, and the party lost all 12 of its councillors.

The total BME population of the constituency of Barking is 45 per cent, African being the largest BME category. There are 16,648 Asian voters and 20,508 black voters here.

“Everyone is welcome on the bus,” cries Woolley. “Even if they vote BNP – I will sit them down and transform them, change their view of the world.”

Giasuddin Miah, the councillor for this ward, pops on board to watch voters register. Miah, who is of Bangladeshi origin, tells me it’s important every resident here, whatever their background, should stand “shoulder to shoulder, as friends, as brothers”, and says to people on the doorstep: “Don’t judge me on my colour, on my background, judge me on whether or not I’m of use to you.”

The leader of the council, Darren Rodwell – who was Labour’s campaign organiser when it fought the BNP here during the last election – is equally vehement that Barking’s diverse community remains tightly bonded. “I don’t do this ‘we’re separate communities’ thing,” he tells me. “We’re one borough, we have to engage with the whole community.”

While he admires the work of the battle bus parked in his patch today, he is disappointed that “the main parties didn’t learn from the experience of Barking and Dagenham”.

He tells me: “Don’t just penalise the most vulnerable – ethnic people who move to this country, people on benefits… [national politicians] should listen to everyone in this country, because I don’t believe they’re all being listened to, and that’s the only way to address the far right. As far as I can tell, Ukip’s immigration policy is no different from the BNP’s.”

Woolley, although heading a non-partisan movement, is also vocal about the rise of Ukip and its implications.

“The toxic immigration rhetoric that is often heard from Ukip has a poisoning effect on society,” he says. “It is based on fear and loathing, hatred of other. But it’s easy. And it is effective in its divide and rule.”

He continues: “What makes the UK strong, and places like London special, in real terms, is its diversity. The UK is teeming with diversity: languages, skills, creativity, entrepreneurialism. That’s the reality. And yet the rhetoric says that anything other than a narrow Britishness is bad. It pits black against white, Muslim against Christian, neighbour against neighbour.”

Like Barking’s council leader, Woolley feels betrayed by national politicians on this subject, reflecting that, “there are very few mainstream political leaders who are brave enough to say, ‘actually, the great tenets of diversity is our strength’.”

He gives the example of people of colour “underpinning the British jewel” that is the NHS. “And yet, to some people, looking at the UK, they will think that the scourge of this nation is people of colour, precisely because of this raging gutter debate about immigration.”