There were plenty of raised eyebrows after Jeremy Paxman told attendees at the Adweek conference that he admired David Cameron, didn’t think much of Ed Milband, and had been sounded out by the Tories to fill the vacant seat of Kensington and Chelsea.

But any objections to Paxman’s presence in the big chair were destroyed – along with the Prime Minister, who greeted the advertising break like an injured man greets morphine. The veteran broadcaster asked tough questions about food banks, whether or not Cameron could live on a zero-hours contract, or if he was just too posh to win a majority. 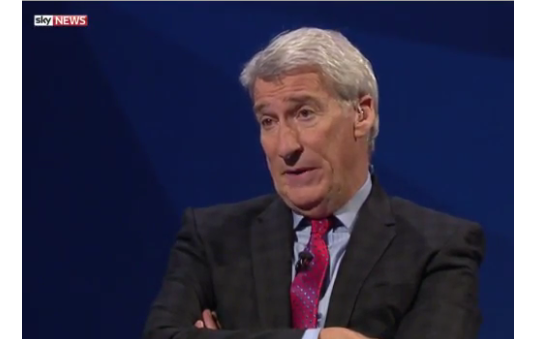 Paxman is not impressed with the Prime Minister’s response on Libya. Photo: Screengrab/Sky News

2. Audiences should be seen and not heard.

The two clashes between Jeremy Paxman and the two leaders were electrifying. But when we panned to the audience Q&A time slowed to a treacle-like pace. It may have allowed viewers time to put the kettle on but neither leader really struggled with the questions from the public.

Football fans will be familiar with Dirk Kuyt, the former Liverpool striker who at times looked like he would have made a better ironing board than a footballer.  But in the big games, something funny happened to Kuyt: he would turn into a match-winning centre-forward, with decisive goals against Chelsea, Manchester United, Arsenal, Barcelona and Everton.

Ed Miliband does something similar. The Labour leader, so often flaccid and underwhelming at PMQs came to life tonight with a bravura performance fizzing with self-confidence. “He fought back and showed some humour,” was Nigel Farage’s verdict in the Sky “Spin Room” afterwards.

That the ICM poll showed only a narrow victory for Cameron – 54 per cent to 46 per cent – who has approval ratings far in excess of Miliband will be comfort to Labour. The leadership believes that the debates will allow Miliband to “re-introduce himself” to the electorate free of the unflattering lens of the media. On this evidence, they may well be right.

Yesterday, David Cameron rode out as the undisputed winner in the final PMQs of the parliament. Labour MPs were deflated while their Conservative counterparts were on a high. Tonight, the Prime Minister was put on the rack by Jeremy Paxman – although Ed Miliband’s decision to let Cameron go first means that the memory will have faded by the time the credits rolled.

Instead of the gladiatorial arena that favours Cameron, Miliband was put in an environment he does well in: a Q&A with the general public and a one-on-one interview with Jeremy Paxman.

If the Labour leader stumbles in the seven-way debate or that also-rans’ battle, questions will rightly be asked of the Tory approach to the debates.

5. If Ed Miliband doesn’t care about the newspapers, he’s got some explaining to do

The performance was fine. The details, less so. Ed Miliband says Britain has “too much” immigration. (We don’t.) He wants to get it down. (Which the last five years has shown are bad for growth.)  The worst of it is, Miliband knows this. He’s one of Labour’s finest economic minds and a serious thinker. So there are two options: either, despite all his team’s protests, Miliband does care about what “the right-wing press” think. Or despite everything he knows about the economics, he just doesn’t like foreigners very much.