Appropriately for a higher education policy, the tuition fees story has been approached in the manner of student politics: stridently, sometimes misleadingly, and with a whole lot of feelings.

The development of tuition fees in Britain is a muddled timeline zigzagging from Tony Blair’s “absolute nonsense” to a burning effigy of Nick Clegg, followed up with a jauntily autotuned apology replayed every few months on the Today programme.

So, so sorry. Video: YouTube/The Poke

Following the Lib Dems’ broken pledge in 2010 that they would oppose a tuition fee hike, students were kettled, the brave new face of coalition in the UK was scarred, the third party’s vote collapsed, university libraries were occupied, young voters grew even more disillusioned, and pupils considering applying to university…continued to apply.

A few gap years were cancelled, granted, but the elephants will live, and the devastating disincentive of £30,000 of debt never quite manifested itself as feared. 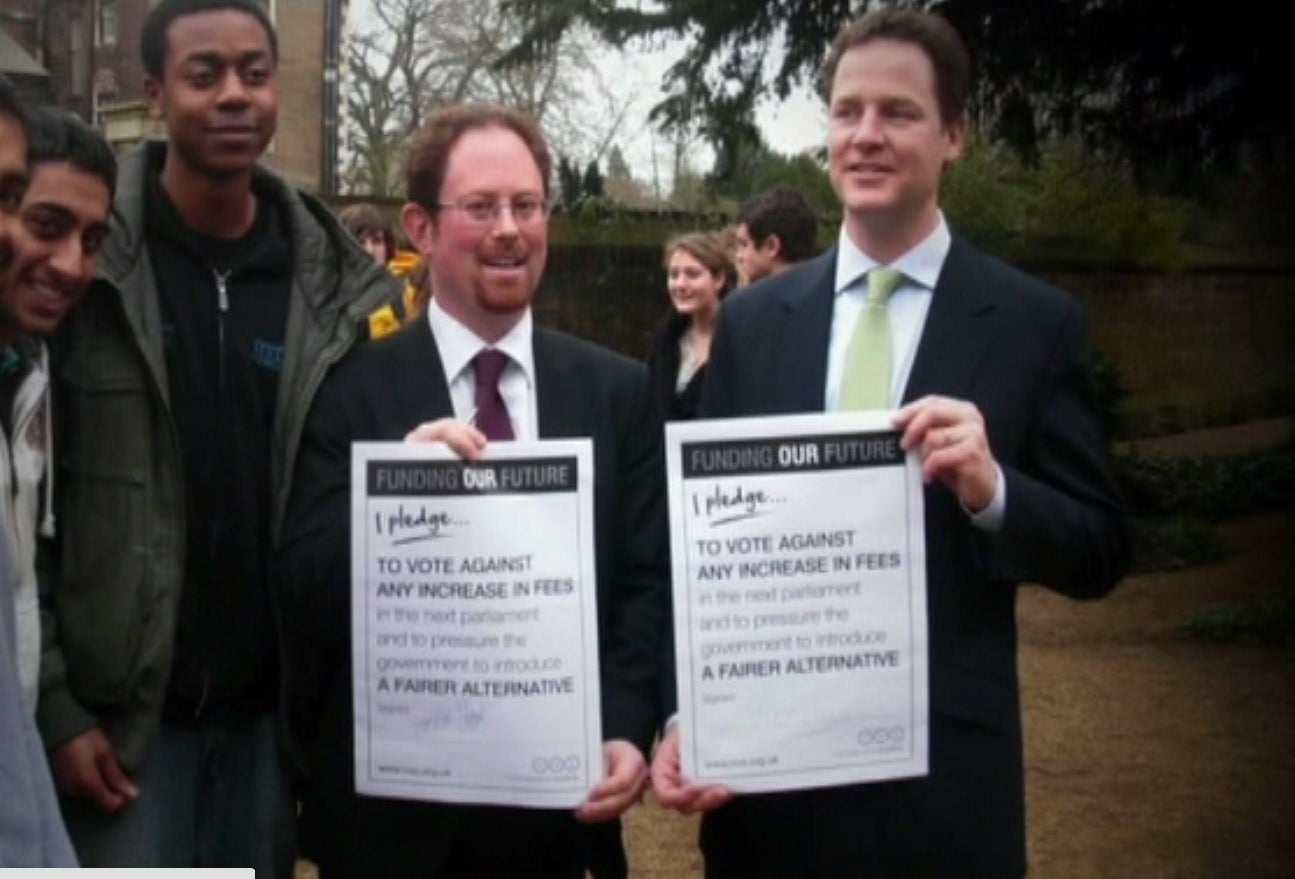 Regardless, the Labour party’s grand election plan is to reduce the controversially trebled fees from £9,000 to £6,000. It’s a policy to please young voters, to appeal to hard-pressed parents and grandparents, and to shore up the betrayed Lib Dem voters who haven’t already shifted their allegiance. But it was Labour that introduced tuition fees in the first place, and it was Labour that broke its pledge not to top them up.

Back in 2001, Labour was re-elected on a manifesto that pledged the party “will not introduce top-up fees and has legislated against them”.

Here it is in quaintly apologetic serif:

The idea for the innocuously-named top-up fees came after Labour’s acceptance of a £1,000 tuition fee in 1997, as recommended by the Dearing report. This inquiry on higher education was the first to officially consider the idea of students paying for university themselves.

Dearing suggested that students should pay about 25 per cent of tuition costs, but that grants should be maintained. Despite vocal opposition both within the party and outside politics, David Blunkett, then Education Secretary, pushed through the new tuition fee plan to begin in 1998.

It was after this landmark legislation that fearful whisperings of the need for “top-up fees” to supplement the £1,000 cost began to echo around parliament. Students continued to protest, and some boycotted the fee. So Labour promised it wouldn’t ask students for a “top up”. 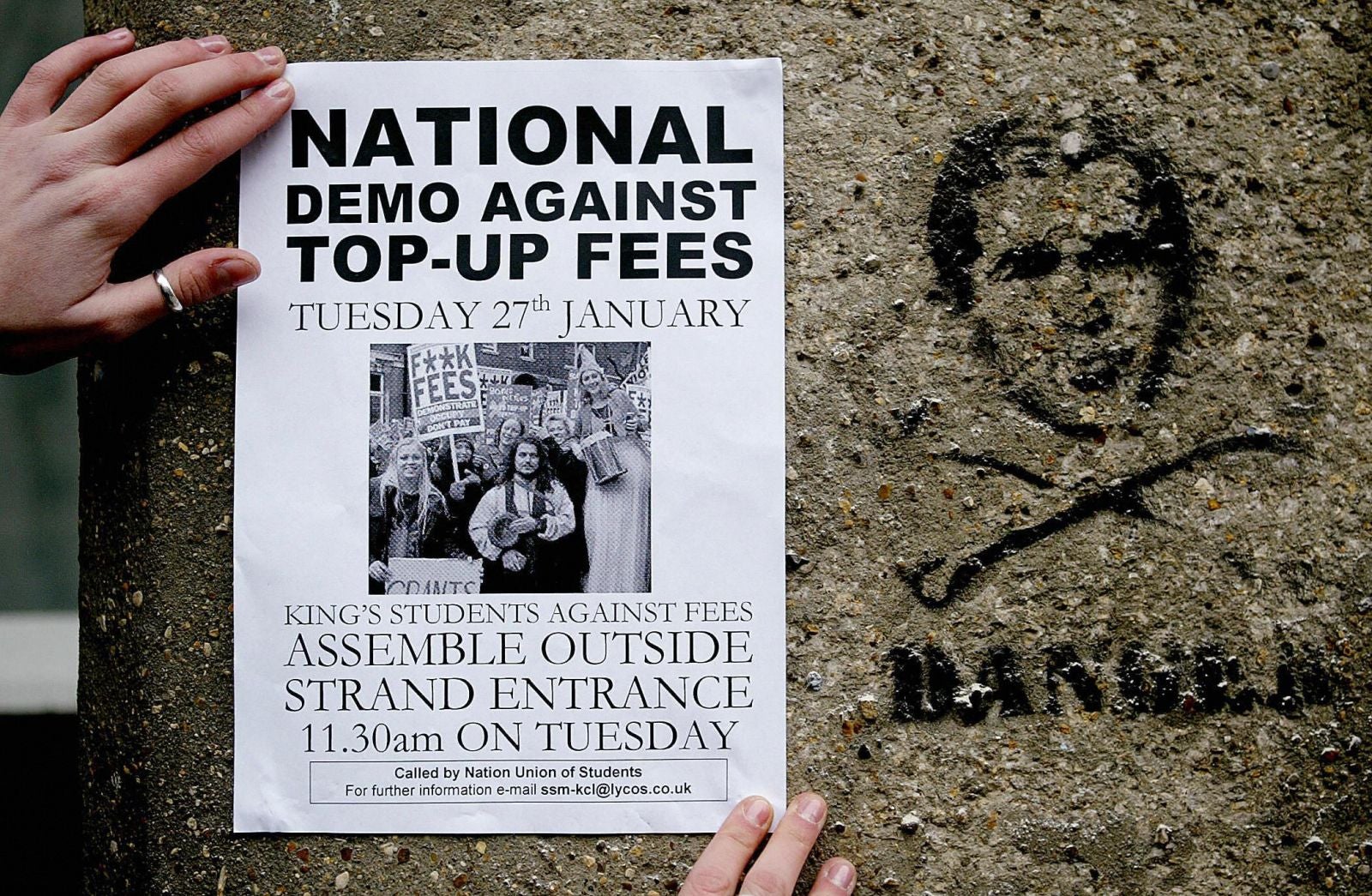 Under Labour, students occupied libraries and protested the prospect of topping up fees. Photo: Getty

But less than two years after Labour’s 2001 pledge, a white paper was published that laid out proposals allowing universities to set their own tuition fees up to a cap of £3,000 a year.

After some back and forth as the bill struggled along, in which Tory leader Michael Howard labelled Tony Blair’s plans for variable tuition fees “absolute nonsense”, and a full-scale independent review was announced, top-up fees were finally voted through in January 2004.

Opponents and Labour rebels were appeased by, among other amendments, a last-minute concession stating top-up fees would not be allowed to rise above £3,000 during the next parliament without new legislation.

And now that same party – which managed somehow to dodge the Lib Dems’ indelible “traitor” status on tuition fees – wants to cut fees, in spite of cries from both the left and right that this is another “nonsense” plan.

When a boost to maintenance loans would do more to help disadvantaged students, a graduate tax is a preferable option for many, and a reduction in tuition fees could act as a tax cut for the rich, perhaps this time round it should have heeded those cries.