“Rent Freedom Day” and London’s “March for Homes” followed hard-on-the-heels of the New Era and Focus E15 campaigns while our recent research for the Chartered Institute for Housing which found three-quarters of Britons and 67 per cent of MPs agreeing that there is a national “housing crisis”. So, is housing an important issue electorally, and how are the parties polling?

First, the electoral demography; in sixteen of the BBC’s 49 marginal constituencies those who rent their accommodation comprise 40 per cent or more of the population and they are the majority in four seats. By contrast, owner-occupiers vastly outnumber renters in marginals such as Wirral South, East Dunbartonshire and Mid Dorset and North Poole.

Thus the map of Britain’s key marginal seats is not only a patchwork of red, blue, orange, green and yellow, but also one of different tenure profiles. And while owner-occupiers have 2.5 times the “voting power” of renters nationally (being twice as numerous and more likely to vote), this arithmetic will vary locally. Mobilising renters could bring success and there is more electoral ‘upside’ among this group, but their sheer weight of numbers makes it folly to ignore mortgage holders and owners.

How are the parties doing? A problem for both Labour and the Conservatives is that they face challenges among their traditional tenure constituencies. For example, historically, more owners have voted Conservative than Labour (even during the Blair years) but analysis of those “certain to vote” in our aggregated monthly 2014 polls shows the Conservative share dipping, and Ukip’s rising. Similarly, social renters have always been Labour-leaning and the party share is up on 2010, but only just and, again, Ukip have reached 15 per cent. 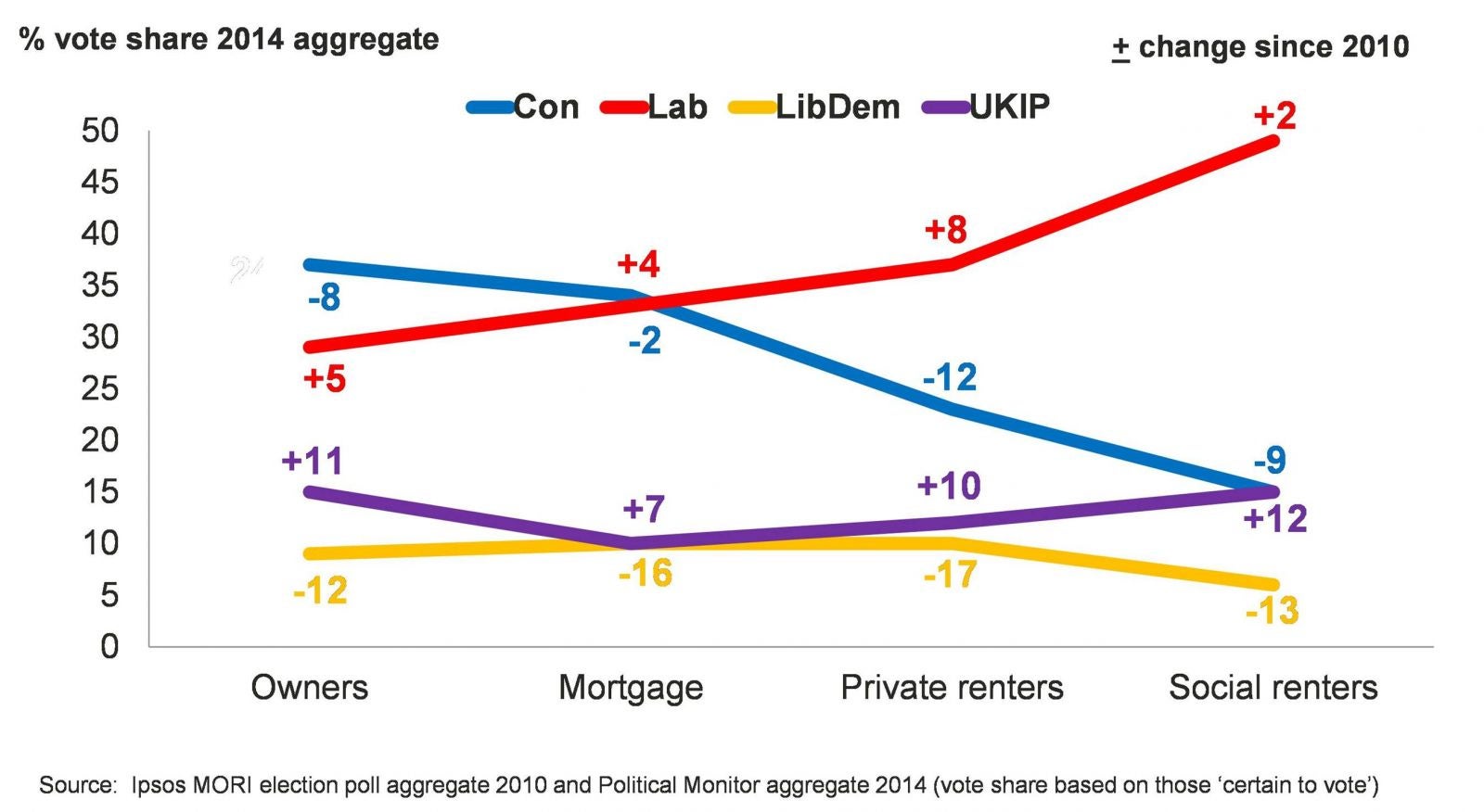 The Conservatives and Labour are neck-and-neck among mortgage holders who, along with private renters, are the two “bellwether” tenures (they tend to vote the same way as Britain does). The Conservatives will be relieved that mortgage interest rates will stay stable until later this year while Labour will be cheered by its showing among those renting privately, up eight points on 2010 although their share is being squeezed by both Ukip and the Greens. Moreover, private renters are the least likely tenure to be registered to vote and less likely than owner-occupiers to turn out.

This all points to something we already knew; the general election is extremely unpredictable. The picture is unclear on housing too; it is more salient at this stage before an election than it was in 2005 and 2010, but is an issue which only 5 per cent identify as determining their vote. And while there is a strong sense that housing is in crisis and is something government can do something about, house prices and affordability are the salient issues and are associated more with the market than government (and often weakly associated in the public’s mind with supply).

Labour lead the Conservatives on the issue of housing but we ought to remember that housing is not the be-all-and-end-all issue among any tenure group. Even among private renters who are particularly concerned with housing, the issue trails the NHS, immigration, the economy and unemployment. It does, though, make the top three in London. And perhaps recognising this, the Conservatives have made housing one of their six national election themes while Labour and the Liberal Democrats have repeated pledges to build new homes at volume.

What next? The safest bet is probably that housing will feature more at the 2015 general election than four years ago, especially safe given very limited attention it has received at past elections. But should it be more than the ‘second order’ issue that looks likely? While our polling finds a growing sentiment that we are talking “too much” about immigration, 82 per cent agree that government should give more attention to housing.